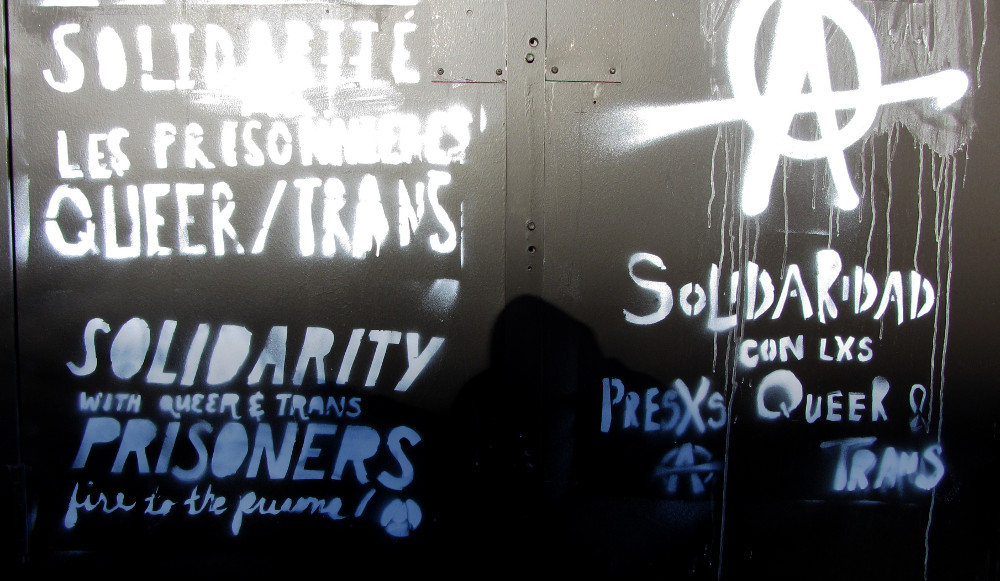 In response to the International day of solidarity with trans and queer prisoners, we roamed our streets leaving messages of solidarity in french, english, and spanish.

Because war against the existent begins with the reappropriation of our lives and the deconstruction of established norms.

The struggle is individual, collective, but especially daily.

Against domination, fire to the prisons! 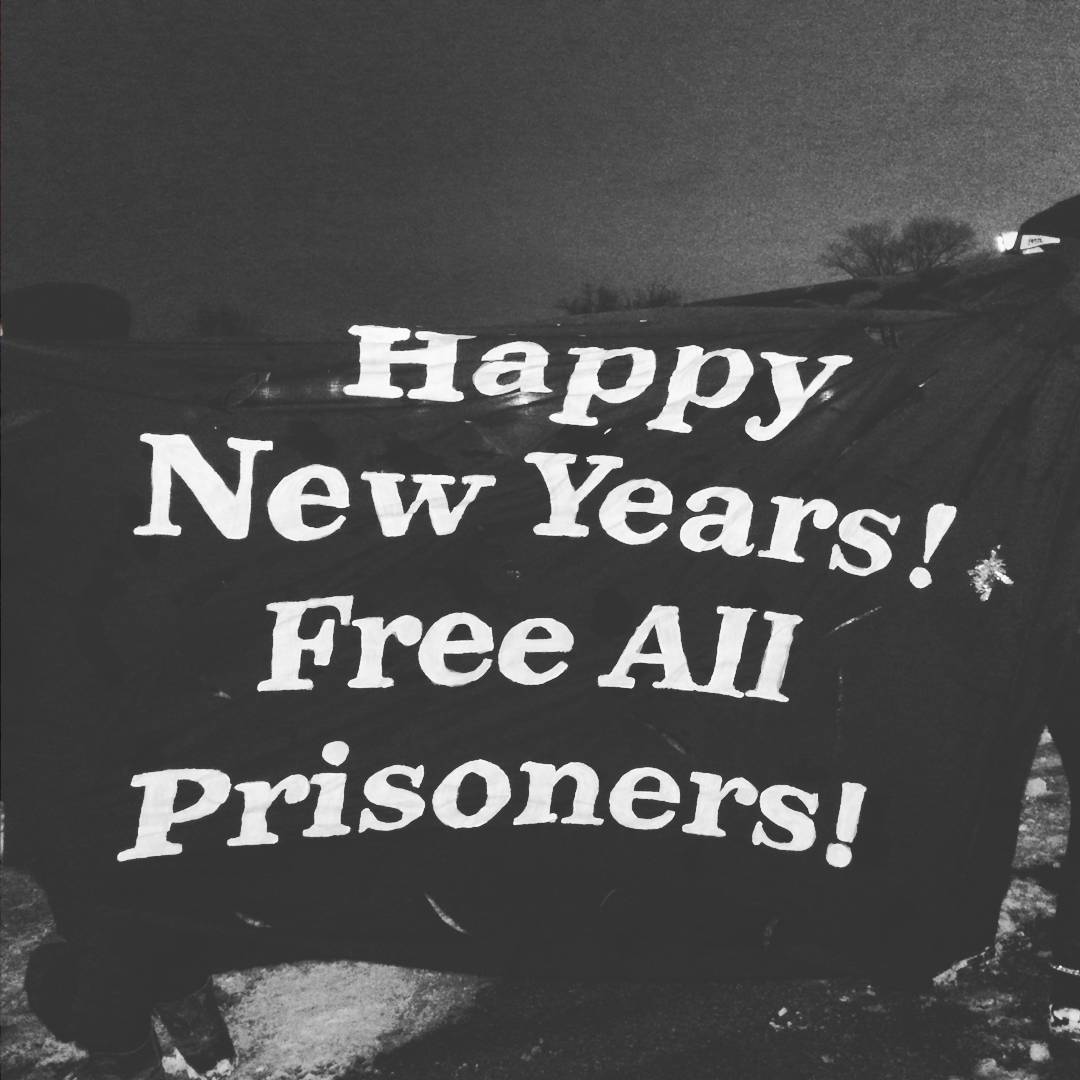 On New Years Eve, over 100 people gathered for a noise demonstration at the prisons outside of Montreal in Laval; the Immigration Detention Center, the Federal Training Center minimum facility, and Leclerc prison. Banners read : Happy New Year, Free All Prisoners and Our passion for freedom is stronger than prison.

At the Immigration Detention Center, we were not able to make visual contact with people inside but know from previous years that fireworks and chants can be heard across the walls. Police following the demonstration on foot had their video camera obscured by banners, and demonstrators walked in their path to disrupt their line. At Leclerc and the Federal Training Center, prisoners could be seen flashing their lights on and off, waving and shouting through the windows. An abundance of fireworks were shot off at each prison, and statements were read over a sound-system against prisons and their relation to systems of colonialism, white supremacy and capitalism. Words of support and solidarity with prisoners were communicated in French, Spanish, and English.

We’re stoked that three noise demonstrations took place in Quebec this New Year’s Eve. We hope that this tradition can serve as a moment to welcome a year of continual and multiform struggle against the prison system, and the people, institutions, and infrastructures that maintain it.

Excerpt from the callout:
“…We want to celebrate resistance inside prisons. In April 2015, more than 70 mothers in the Karnes County Detention Center in Texas went on strike. The migrant women launched a hunger strike demanding their own release while they pursue asylum claims in the u.s. In August, prisoners in long-term solitary confinement in California won a federal class action lawsuit effectively ending indefinite long-term solitary confinement. In October, Amazon, an anarchist transwoman who is currently imprisoned in California, went on hunger strike demanding that she be transferred to a prison for women. In Lindsay, Ontario, detainees held by CBSA in the Central East Correctional Centre have been on strike for two years demanding an end to immigration detention. These are just a few examples of prisoner resistance that happened in the last year. We stand in solidarity with those struggling against prison walls from the inside.

Prisons were created to isolate people from their communities. Noise demonstrations at prisons are a material way to fight against repression and isolation. We want to extend a message of solidarity to folks inside, and wish them a happy new year. Although, a truly happy new year would be one without prisons and the world that needs them…” 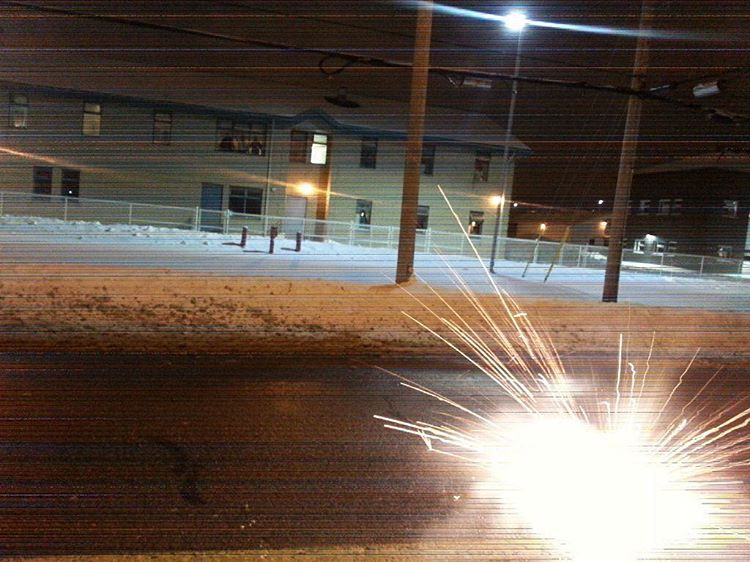 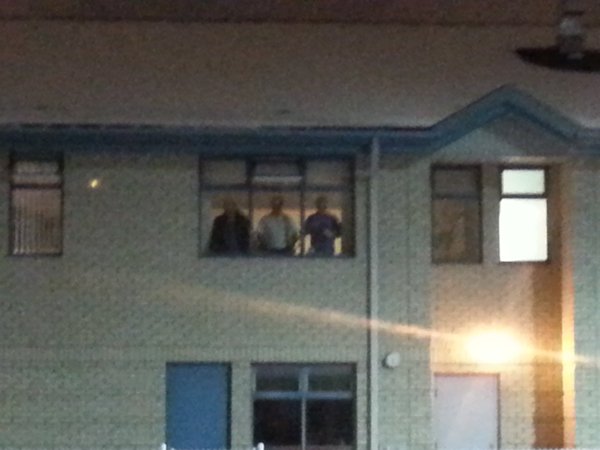 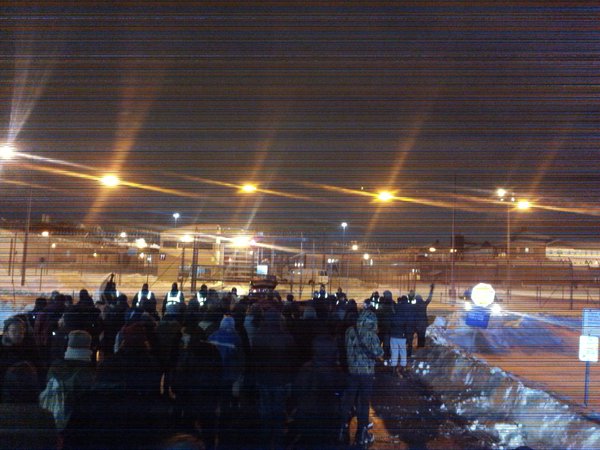 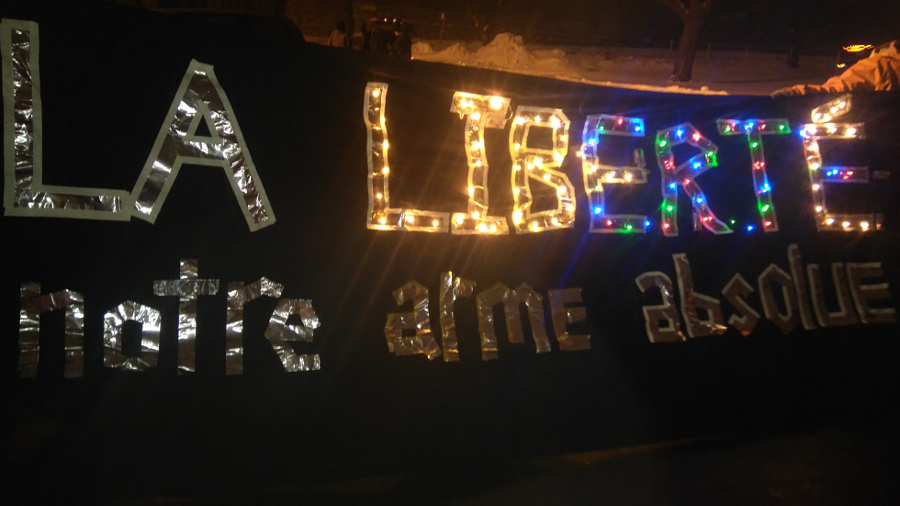 On the evening of December 31, we went to the federal prison for women in Joliette in the region of Lanaudière (the only prison for women with sentences that exceed two years in so-called Québec). We held two banners: L'(A)MOUR POUR LA LIBERTÉ NOUS FAIT ENNEMI.ES DE L’AUTORITÉ (The p(A)ssion for freedom makes us enemies of authority) and LA LIBERTÉ EST NOTRE ARME ABSOLUE (freedom is our absolute weapon). We shot some fireworks, and were able to communicate with the incarcerated women and shout our solidarity. Several of them could leave their units (little houses in the prison yard), or went to the windows. This demo was a first of its kind at this prison.

Solidarity with all prisoners in struggle

Until we are all free 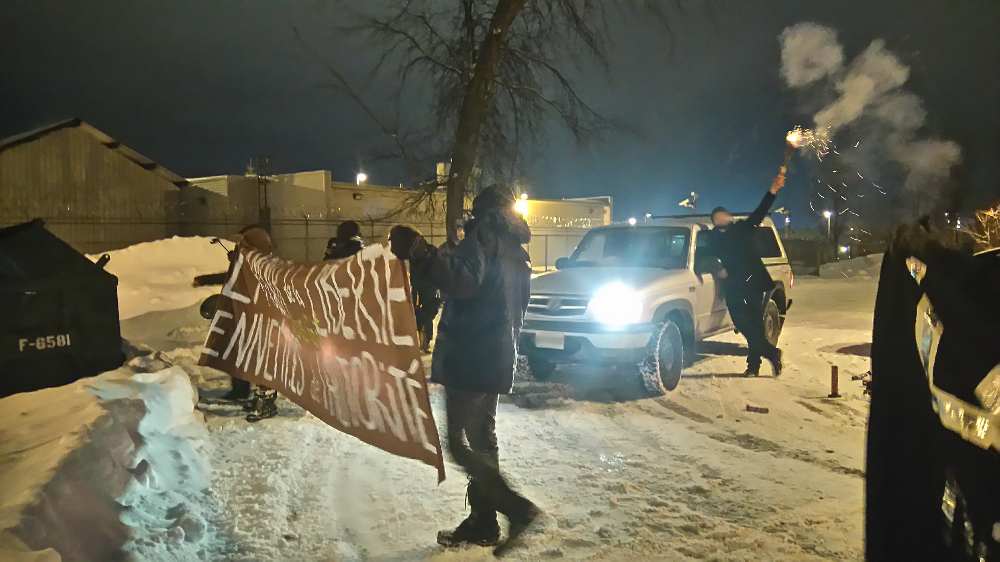 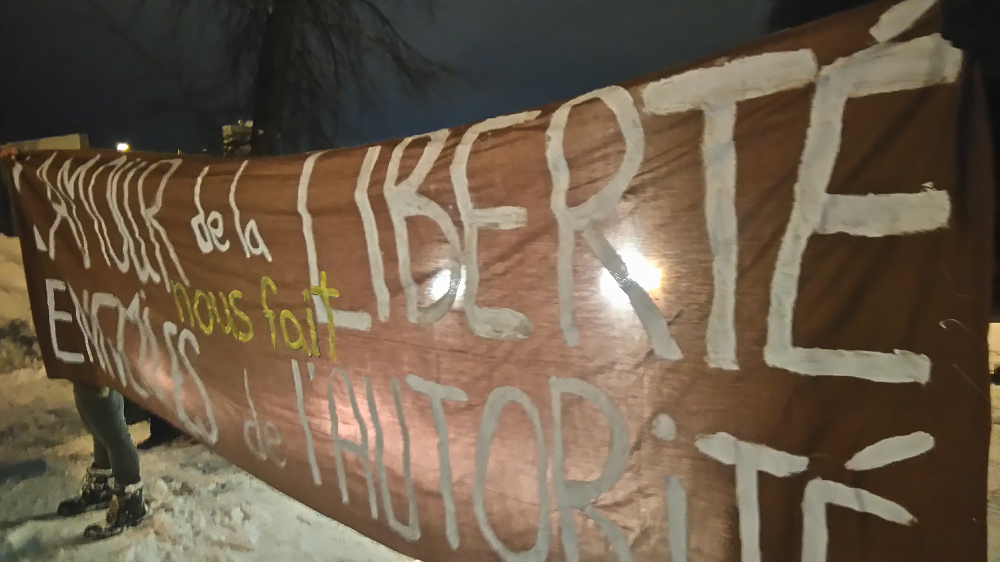 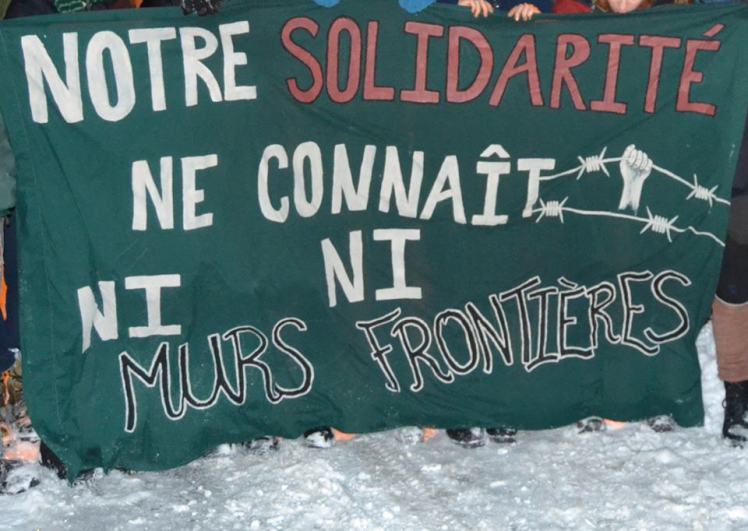 Our solidarity knows neither walls nor borders

On the night of December 31, a noise-demo took place in front of the prison of Rimouski. Around ten people gathered with pots and fireworks for the occasion. The security guard blocked us from access as soon as we began, and three cop cars rapidly arrived, asking us to leave the prison property. We continued the action regardless, reading the manifesto of prisoners against austerity and focusing on the situation in Rimouski.

If people are in contact with prisoners at Rimouski who could speak to their daily situation, it is possible to contact us to relay the information and enrich the dialogue.

The prison of Rimouski is one of the worst in terms of overpopulation in Quebec, with a rate reaching 130-135% in 2013. I’ll let you imagine the situation two years later, with the same austerity measures imposed by the liberal government. Prisoners are stuffed in, sleeping on the ground or are two to a cell made for one person.

During 2013, three prisoners were subjected to illegal detention, and were released late due to errors in documentation or in the calculation of their sentence. In the same period, two suicide attempts took place. In addition, of note is the rise in people experiencing mental health issues which are directed towards the prison establishment of Rimouski, despite the blatant lack of doctors or adapted care. As the living conditions become increasingly unbearable, the tension between prisoners can only worsen. It’s time that this changes.

We want to support the struggles of those inside prisons across Quebec, and assist prisoners to have their voice heard across the walls!

As the majority of prisoners are locked up for crimes related to their living conditions, we maintain that every incarceration is political!

Three campaign offices of electoral candidates were attacked in Montreal and Trois-Rivières just prior to the elections. To our knowledge, no claim for these actions has surfaced, so we’ve posted several excerpts below.

A window of one of the two offices of the conservative campaign candidate Dominic Therrien was broken over the Sunday night (19/10/2015), several hours before the opening of the voting offices. 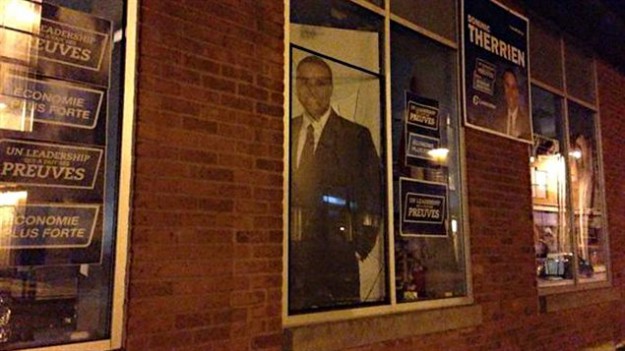 The campaign office in Outremont, Montreal of the leader of the NDP, Thomas Mulcair, was vandalized over Tuesday night (14/10/2015).

The front windows of the office, situated on ave. du Parc, were sprayed with orange paint. The contents of a fire extinguisher was also emptied into the interior of the office through the crack of a window.

“There was powder everywhere. It will have to be all cleaned. We lost time to do it”, lamented the director of the campaign of Mulcair in Outremont, Graham Carpenter. 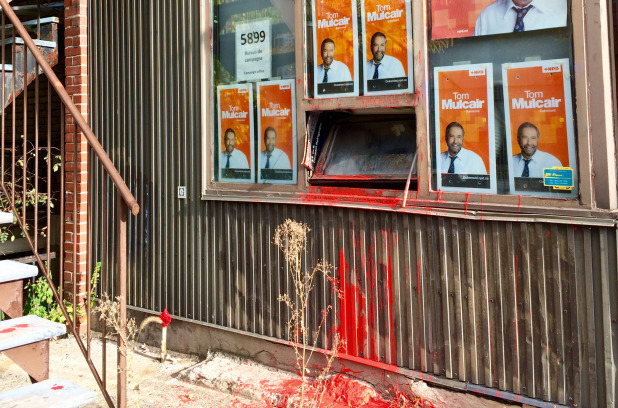 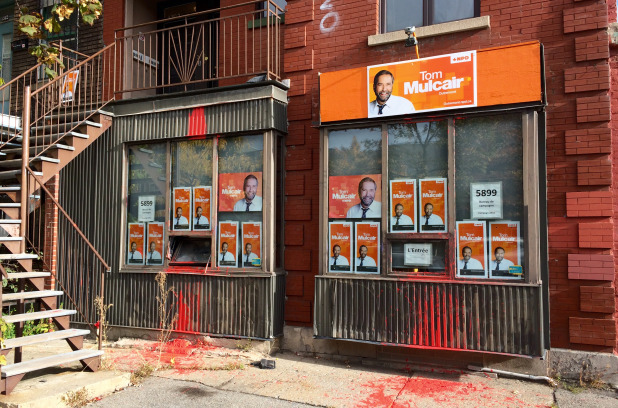 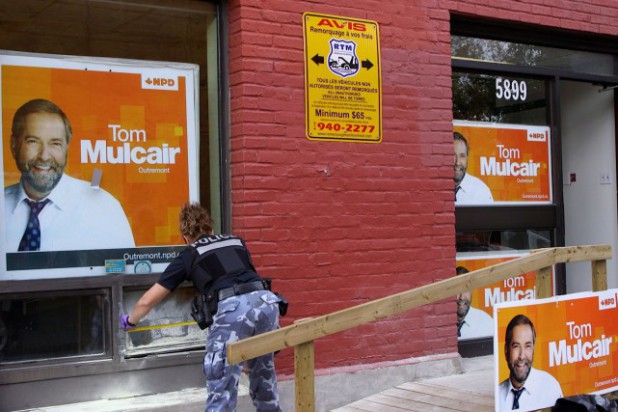 The campaign office of conservative candidate Wiliam Moughrabi in Ahuntsic-Cartierville, Montreal, was vandalized over Monday night (13/10/2015).

“They threw at least two gallons of red paint on the window of the office”, said M. Moughrabi. “We spent the day of Tuesday cleaning it, and we will still clean it today”. 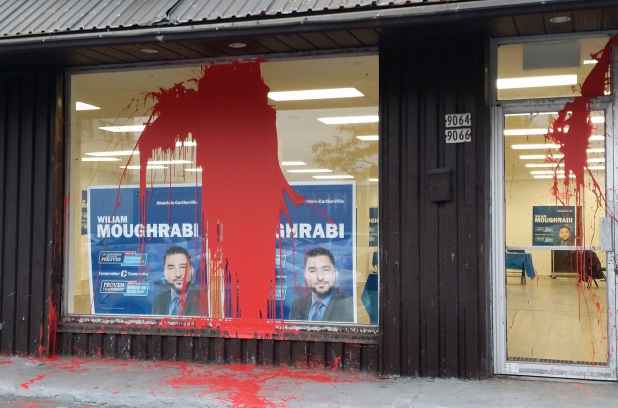 Last night, a few friends painted a flaming police cruiser in the neighborhood of Hochelaga along the main boulevard, inspired by the struggle against police in St. Louis and Ferguson. Solidarity with all the rebels out on the streets learning how to fight the police together. Despite the more successful enforcement of social peace in Montreal at the moment, your acts and words resonate with the furthering of hostilities towards white supremacy, the State, and capital in our context. 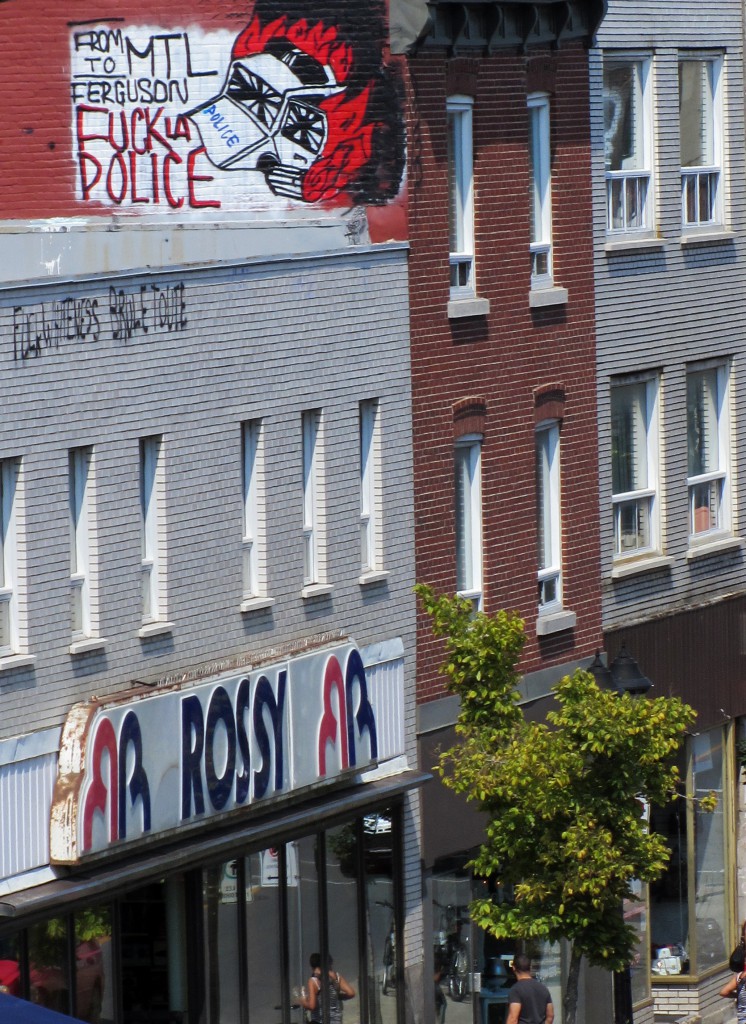