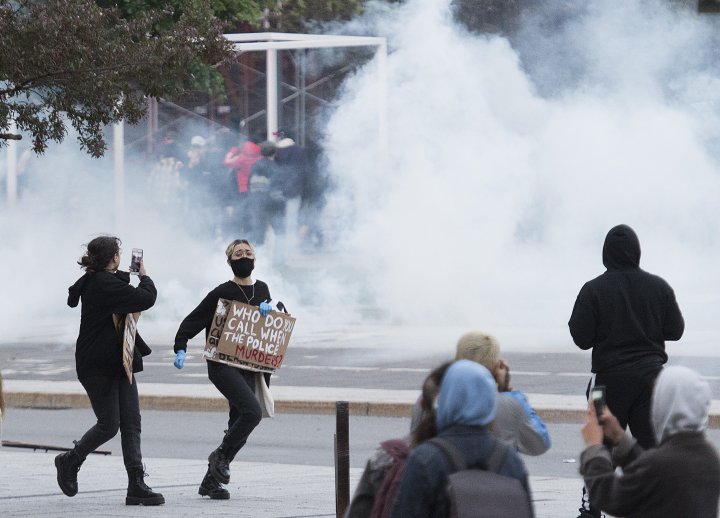 Supporting the uprising spreading across America over the police murder of George Floyd means bringing it home. We got a sustained glimpse of exactly that Sunday in Montreal, as for the first time in years, the police lost control of downtown for an extended period of time.

After the end of the organized march, a young and multi-racial crowd fought the police outside SPVM headquarters, responding to tear gas with rocks and bottles. People erected barricades and set fires to slow police movements. Over the following hours, hundreds of demonstrators continued to hold space in the street, as storefronts were smashed and goods expropriated up and down Ste-Catherine, the main shopping artery, including at Birks, a high-end jewelry store, which was also attacked with a molotov.

We’ll leave out a play-by-play of the night, to respond to a dynamic that we think could limit our capacity to resist, going forward. While Sunday proved that a wide of array of people are ready to fight back against a system that is rooted in genocide and the ongoing violence of racialized domination, some of the loudest voices during and after the action in the streets have been those clinging to “peaceful protest” as the only acceptable form of resistance.

Relying on rumors and false information, the narrative of white “outside agitators” borrows from white supremacist propaganda and erases the agency of Black people courageously resisting oppression by any means necessary. It’s a narrative aimed at dividing movements and delegitimizing our shared anger and resolve. As anarchist people of color in the United States wrote recently:

Self-pronounced leaders have tried to insinuate that anyone who desires conflict with the police after the murder of George Floyd in Minneapolis are “White people [who] DON’T get to use Black pain to justify living out riot fantasies.” As if the real white fantasy isn’t people of color policing their own behavior in order to save the white supremacist society from being destroyed. This is an old trick that is worth being exposed, again.

Against these narratives which make it easier for the police to maintain control and keep killing, let’s not hesitate to say clearly that the standard by which we choose how to fight will not be legality or civil-society respectability.

Countless slave revolts were put down and betrayed by people saying radical, rebel slaves were going to get everyone killed or in trouble. Black movements are always infiltrated and disrupted by people sowing discord using manipulative tactics like this too.

It’s legitimate to attack the police, an institution designed and dedicated to violently suppressing Black people’s freedom, enforcing the theft of native land, and defending those who get rich by exploiting us. By doing so, and by gaining the confidence and tactical capacity to win space and time, we show that we don’t need to accept their hold over our lives.

It’s legitimate to barricade the streets and set fires – to transform an urban environment built for policing into something that might give us a chance of success.

It’s legitimate to loot stores, because everyone should have nice things, and a world that values commercial property over Black lives continues to put people like George Floyd and Regis Korchinski-Paquet in grave danger of premature death.

These should form the starting point for all conversations about how to engage in a diversity of tactics in the streets, conversations which must also address the effects of our actions on those we’re sharing the streets with, how to keep each other safe, and the goal of developing a capacity for conflict with an understanding that we don’t all face the same level of risk.

Many of those policing other demonstrators’ actions go as far as to photograph or film them attacking the police or property, afterwards posting this information on the internet in an attempt to identify and put more people in the hands of the police. To resist this trend, we want to remind everyone present to intervene directly if you see people filming during riots; tell them to stop and if necessary make them stop. And to the brave people breaking glass and starting fires, remind one another to keep your faces covered.

A genuine insurrection is underway south of the border. While the uniquely bloody legacy of racism in the United States gives the rage boiling there a certain anchoring in geography, antagonism toward the police is undeniably universal, and anti-Black racism is deeply engrained in the history of Quebec and Canada. Will we face up to this history-bending moment and find meaningful ways to engage, to extend the revolt, or shrink into scripted, activist displays of superficial “solidarity”? The time is now to bring the uprising home.