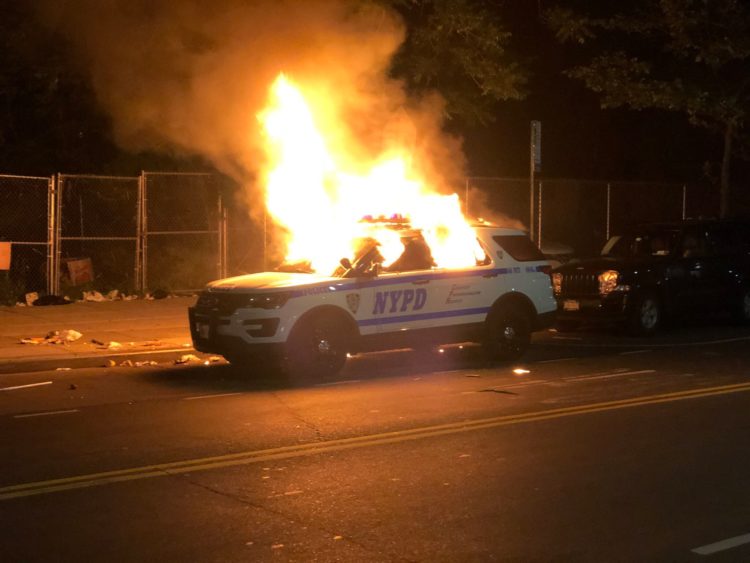 Revolutionary greetings from the insurrection sweeping throughout the occupied territories of the so-called United States of America. We are asking comrades across the world for immediate and unrelenting acts of solidarity against the United States.

In the past few days, we have accumulated experiences that amount to decades of learning. In doing exactly what we previously thought was impossible, we have exposed this country for what it truly is: nothing more than a fragile paper tiger. Tearing at its massive technological police state, the black people of America have demonstrated that they will from hereon refuse to ever be intimidated by a power structure upheld by white terror and violence.

In its desperation, the State is now propagating the falsehood that this rebellion is being led by white outside agitators. We’ve all heard these lies before, most prominently in their history books, where they trot out fictional narratives about how Lincoln freed the slaves. This is nothing other than a more recent installment of an old paternalistic trick by the white supremacist establishment to deny black people the intelligence, the spirit, and the autonomous will to direct their own rebellion and free themselves. As the history of this miserable nation repeats itself once again, what has become clearly evident is that black people have been and will continue to be the only revolutionary force that is capable of toppling the oppressive status quo.

Everywhere the pigs have lost their will to fight. Their eyes, which only yesterday were windows to empty hatred and contempt, now display stultifying self-doubt and cowardice. For once, their behavior portrays their weakness as every step they take back is marked by hesitation.

Whether on the domestic or international front, we can see the Man’s backs up against the wall and so it is the time to be at our most tenacious. We cannot give him an inch to squirm wherever he has put pilfering uncalloused hands. This means that we are calling for all revolutionaries around the world to swarm with antagonistic actions and flood the streets with public demonstations.

Together, if we keep pushing, this land of chattel slavery, indigenous genocide, and foreign imperial aggression can finally be wiped out so that it will only be remembered as one of the more ugly chapters in human history. In turn, each step ushers in the freedom and the solidarity that crowds out the space of our once silent and unheard screams.

All power to the black insurgency!

Storm their vulnerable bastions of power!