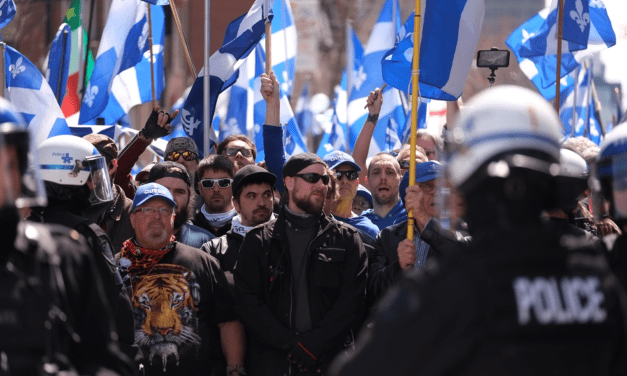 When the so-called Vague bleue [Blue Wave] began it seemed like a breath of fresh air for the identitarian nationalist movement, however it now appears that the organizers failed to draw the lessons of the last several years and are intent on repeating the same mistakes.

After the first edition of the Vague bleue (VB1) in Montréal, on May 4, 2019, a number of far-right voices (e.g., Alexis Cossette-Trudel, from Citoyens au Pouvoir, and Donald Proulx, of the Parti Patriote) were heard criticizing the presence of militias with paramilitary affectations at a gathering meant to be family friendly and open to all. The presence of these organizations was the sole reason Montréal antifascists mobilized in such large numbers to oppose the event. This particular point of discord opened fissures in the alleged unity of this new identitarian coalition.

With only a month until the “Vague bleue (part 2)” (VB2), called for Trois-Rivières, on July 27, which is shaping up to be even sillier than the first edition, Montréal Antifasciste is taking the opportunity to put names to the faces of these different “security” teams (who find themselves encased by hundreds of cops every time they mobilize) and of the “paramilitary” groups that fancy themselves Québec’s future army, but which have the discipline of a litter of kittens and arm themselves with material sold online for paintball enthusiasts.

Notably, all these self-important, wanabe “security” goons make up about a quarter of the Vague bleue as a whole…

The GSP began as the security team of the tiny Front patriotique du Québec clique, but under Robert Proulx’s stewardship increasingly established it’s autonomy. Made up of about fifteen people with a handful of sympathizers, the GSP specializes in providing “security” at far-right demos and events, going as far as working with the Soldiers of Odin, an anti-immigrant group that includes neo-Nazis among its members. Following a squabble with the Canadian chapter of the III% paramilitary militia, part of the Québec III%  chapter joined the GSP. Of all of the groups of this kind that mobilized for VB1, the GSP is the largest and most obstreperous. Its members are extremely fond of taking group photos, particularly posing with a “Action antifasciste” flag that the police seized and gave to them during a demonstration in Ottawa in 2018. One regular member of the GSP security team, found loyally at his post at VB1, is Stéphane Dufresne, the Rambo from Saint-Charles-Borromée who suggested carrying out false flag terrorist attacks “pour réveiller les crisse d’endormis” [to wake up the slumbering idiots].

Its membership is stable, but GSP has tense relations with a number of groups and individuals. Following the tiff mentioned above, it is likely that GSP won’t be part of the VB2.

RNS is an odd little group, made up of a handful of losers from various groupuscules, including Martin Fontaine (alias Rednek Fontaine and Rednek Breault), former member of that flash in the pan La Horde, a splinter from La Meute that never really got off the ground. RNS’s original project was to found an (obviously white) survivalist community in the Laurentians. We spotted RNS members at VB1 in full paramilitary regalia, looking like renegade GI Joes from the burbs. Martin Fontaine was also at the GSP picnic on June 8, easily recognized in his tactical vest emblazoned with the surname “Rednek.” In reality, it seems that RNS is more about role playing than about any genuine political project, but nonetheless we will continue to keep an eye on these pseudomilitary survivalists with open ties to the far right and its ideas.

For the reasons mentioned above, it is likely that RNS will not take part in the VB2. If you have information on the members of this group, please write to alerta-mtl @ riseup.net

This tiny group of militant Islamophobes formed around the family of Martine Tourigny and Stéfane Gauthier (from Bécancour), with Guillaume Bélanger, Nathalie Vézina, and a few others, is seen as the key organizer of VB1, because the movement’s initiator Jonathan Héroux, alias John Hex (from Trois- Rivières), is to all intents and purposes the sole member of his groupuscule, “Le Québec Libre en Action.” These so-called guardians of Québec took advantage of the Vague bleue to promote themselves and recruit some new members, including the infamous Luc Desjardins, key among the rabid conspiracy theorists of the utterly bizarre “Gilets jaunes Québec,” and a very close friend of both the notorious Islamophobe Pierre Dion and the loud and proud white supremacist Michel Meunier.

Storm Alliance, John Hex’s launching pad and an organization he remains very close to, provided key Vague bleue organizers (among them Nadia Fradette, alias Nadia Dumont) and some muscle (in the form of its DFSA security team), while nonetheless keeping a certain distance. Nonetheless, we couldn’t help but notice that Storm Alliance members were out in great numbers at VB1. DFSA, led by Steven Dumont, Storm Alliance’s second in command, is a fairly standard security team that openly exhibits a ready willingness to get into it with its opponents.

Even though La Meute was discreet in its participation in VB1, we easily spotted a number of them in the “phantom” security team (no colours, dressed like your average Joe and Jane) gathered around Stéphane Roch, one of La Meute’s key leaders until the recent implosion. François Cousineau, the leader of Clan 06 (Montréal) made an appearance as well. Always fretting about its image, this has become the established La Meute strategy: send a few people so they can say “we’ve been here from the beginning” should the Vague bleue actually gain some traction, but not sporting their colours lest the whole thing become a boondoggle —a strategy that hasn’t stopped the group from eviscerating itself internally for the past few weeks, to our great satisfaction.

The Vague bleue, a Futile Attempt to Revitalize an Islamophobic Far Right

A year ago, we would have been unsettled by the emergence of a phenomenon like the Vague bleue, but these days the whole thing seems to be falling apart all on its own. After having met with firm and unwavering resistance in Montréal, losing access to their sound truck and being confined in small area (a strategy that seems to have paid off for antifascists!), public pressure forced the organizers to postpone Vague Bleue 2 in Trois-Rivières.

Even if the Vague bleue arrived a little too late, it’s pretty clear that the ideas of the national-populist groups that it represents have made inroads to the very heart of power with the election of the CAQ and the passing of anti-immigrant and Islamophobic laws. In this regard, it is interesting to note that at the moment that Bill 21, which constrains people from wearing religious symbols, passed at the Assemblée Nationale, the most visible far-right organizations (La Meute, Storm Alliance, etc.), with their extremely convoluted vision of the secularism underlying this law, are in disarray and/or decline, while some other groups have recently disappeared altogether.

While there are things to celebrate about this debacle, there is a clear risk of these national-populist groups will restructure themselves in new ways and push for increasingly discriminatory measure against religious minorities and immigrants.All the more so, given that they will find a government ready to listen, if not entirely sympathetic. And that is why we need an antiracist and antifascist struggle now more than ever.

The work has only begun. Join us in this struggle!