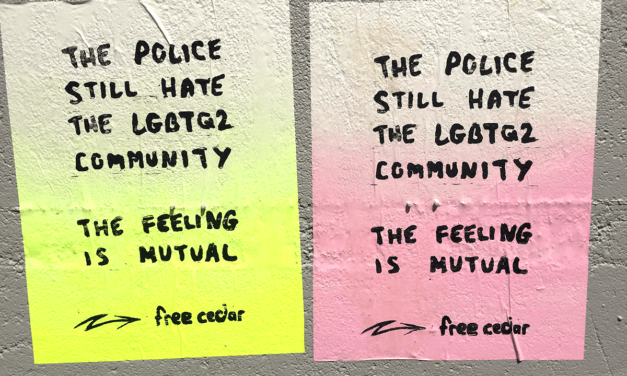 Two weeks ago, the LGBTQ2 community in Hamilton, Ontario, was targeted for a unprecedented attack by a coalition of individuals from fundamentalist Christian groups and far-right groupuscules like the Wolves of Odin, the “Yellow Vests,” and the Canadian Nationalist Party.

Furthermore, the tense relationship between the radical queer and trans community and the police in Hamilton was exacerbated by the manifest indifference police showed to the far-right trolls, instead moving against the queer and trans folks who took measures to defend themselves… while giving the far-right attackers a free hand!

On the afternoon of June 15, the violence began when the abovementioned far-right militants gathered at the edges of the Pride parade, in Gage Park, to intimidate and harass participants and their allies, reciting Bible passages and shouting anti-LGBTQ2 slogans. The radical queer and trans community had anticipated this (there was a similar incident in 2018) and had built a screen out of fabric that stood several meters high to block from view any acts of intolerance directed at the parade. However, some of those intent on disrupting Pride, annoyed about having their harassment disrupted in this way attempted to skirt this barrier, eventually coming to blows with parade participants. Obviously, our comrades couldn’t let this happen without defending themselves. During the resulting melee some of them were seriously injured, primarily by the attacks of two individuals among the far-right trolls, Chris Vanderweide and YlliRadovicka, alias John Mark Moretti.

In subsequent days, rather than seeking to apprehend the authors of this very well documented violence, Hamilton police chose to target our comrades who defended themselves! As well as Cedar, four other people were arrested and released on promises to appear.

It’s worth noting that as the police allowed them to run rampant the same far-right bags of shit descended on a Toronto Pride event on the weekend of June 22–23 to deliver the same sort of violence upon members LGBTQ2 community and its allies.

These events took place in a context where, since a militant demo was held on March 3, 2018, the Hamilton anarchist community has been targeted repeatedly by both the police and the far-right groups active in southern Ontario. The anarchist space The Tower has been vandalized a number of times, raids have been carried out, and far-right trolls brag online about providing police with anarchists’ personal information.

Clearly, these far-right attacks are unacceptable, and obviously our comrades will defend themselves with the means at their disposal. That the police chose to act against the victims of the violence who were doing nothing more than defending themselves, rather than the authors of the violence, only serves to prove that the police feel no real solidarity with the LGBTQ2 community, and any statements that suggest they do are nothing more than public relations on the part of an institution that has proven itself to be profoundly hostile to the aspirations of minority groups. This is more evidence that social movements cannot and never should have any confidence in the police services.

Montréal Antifasciste and its sympathizers and allies wish to express their unshakeable solidarity with the Hamilton LGBTQ2 community and demand the immediate release of Cedar Hopperton and that all charges be dropped against all those arrested for actions to defend the LGBTQ2 community on June 15.

Update: Chris Vandeweide was finally arrested on June 26th… as well as two more members of the queer community who defended Pride, bringing to five the number of queer comrades arrested for defending themselves.