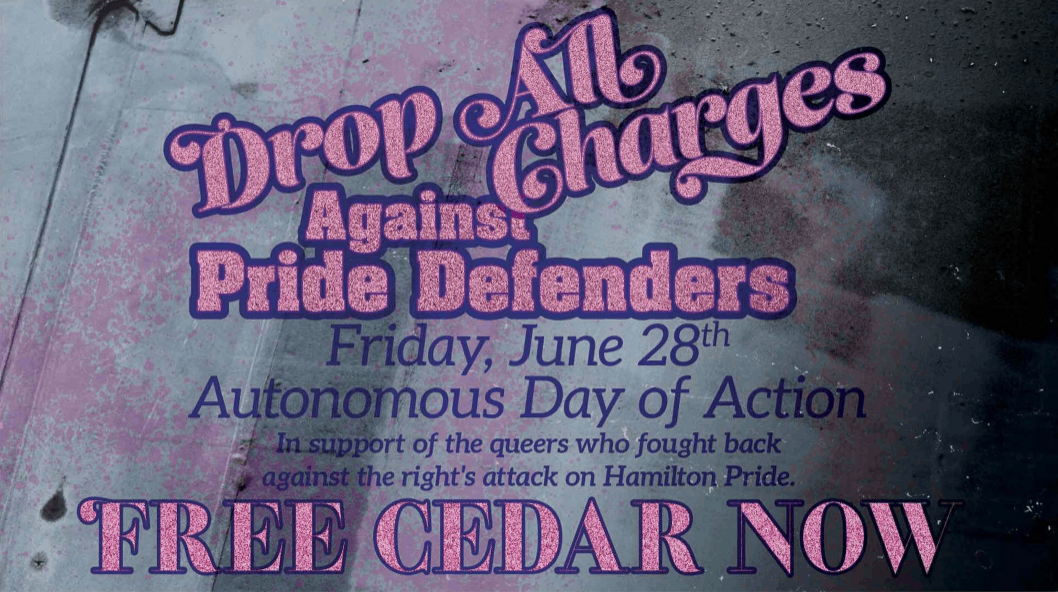 On June 15th, 2019 in Hamilton, “Ontario”, Pride was attacked by a group of far-right homophobes, christian fundamentalists, neo-nazis, and queer bashers. As they did in 2018, they arrived with massive homophobic signs and banners, and immediately began to scream insults and slurs. They aggressively harassed individuals, made jokes about rape, and threatened physical violence. Things quickly escalated as the bigots violently confronted people who were holding a fabric barrier in an attempt to block them from disrupting Pride. Initiated by the far-right activists a brawl broke out – queers who refused to allow their presence to go unchallenged were attacked, but fought back. Several friends were injured and required medical attention. The police did nothing during this hour-long conflict, and only stepped in at the end when there was nothing left to do. The haters knew they couldn’t sustain their presence any longer, and welcomed the police escort out of the park. After being kicked out of Pride, this same group chased and assaulted queer youth in the neighbourhood, and then went on to attack people at Toronto Pride the following week.

Since these events, the Hamilton Police have felt quite threatened – communities that feel empowered to use force to defend themselves undermine their unquestionable authority. Over the course of the last week, the police have consequently been targeting and harassing known queer anarchists in the city as punishment for folks standing up for themselves. Our dear friend Cedar (who wasn’t even present at the event!) was arrested on Saturday, and was on hunger strike for five days. They will stay in jail until a lengthy probation hearing, a vengeful and punitive measure carried out by the police because Cedar publicly criticized the police’s actions. Later this week, two other queer friends have been arrested and charged with probation breaches based on suspicion of being present at Pride. Not a single homophobe was charged all week, despite the widespread circulation of their names, faces and videos of their violent actions, until public pressure finally forced the police to charge Christopher Vanderweide with assault with a weapon. We oppose the colonial prison system, but the repression the police directed to those they suspect as Pride defenders first is once again truly revealing of their age-old position and purpose: protecting racists, misogynists, and homophobes.

Queer might involve our sexuality or our gender, but to us it means so much more. It’s a territory of tension that we must defend. We stand in solidarity with Cedar and those accused in connection with this event, as well as any queers held in prison for bashing back. As queers and trans people, we know that our existence has been fought for bravely by those who have come before us, not only against homophobes and neo-nazis but also against the police.We remember Stonewall as a four-day anti-police riot and an explosion of gay trans anger birthing the way for liberation movements to come. We know that queer and trans homeless youth and sex workers face police repression constantly on the streets and that queer people, especially those who are racialized, are disproportionately attacked, criminalized, incarcerated and even murdered. Our existence will continue to be threatened unless we fiercely defend ourselves, our friends, as well and the spaces we create. None are free until all are free.