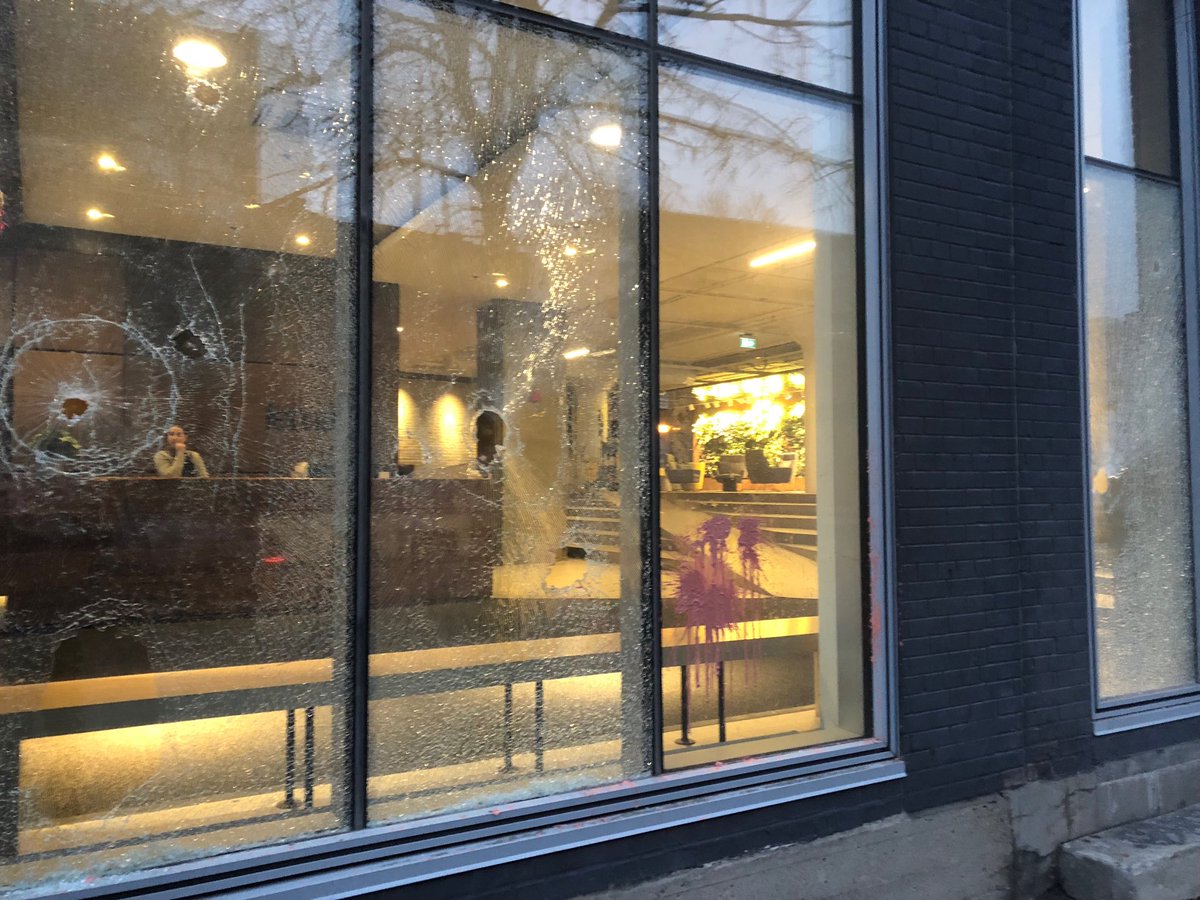 On May Day 2019 in Montreal there were four different demonstrations at different times and locations across the city. The CLAC (Convergence des Luttes Anti-Capitalistes) called for their annual anti-capitalist May Day demonstration to be held in the theme of “No borders”, in the context of the rise of the xenophobic far right in Quebec and the ongoing attept to construct a new migrant prison in Laval, QC. We attended the CLAC’s No Borders May Day, which gathered at 6:30pm at Square Cabot in the west end of downtown Montreal.

Shortly after the few-hundred strong group left the square, heading south on Atwater towards St Henri, a small black bloc at the rear of the demo took shape, shielded by a rear-facing banner reading “All Bosses are Bastards”. Construction fencing, pylons, and other materials were dragged into the street, creating distance between the demo and the cops following behind. Flyers had been passed out at the departure point encouraging people to take both sides of the street and the sidewalks as an attempt to prevent cops from using the sidewalks to flank the demo. This largely worked, no side cops were able to take position.

The demo turned west on Notre-Dame and then north on Greene, heading towards the headquarters of Lemay, an architecture firm designing the proposed migrant prison. As the demo approached the building, a dumpster was lit on fire at the back of the demo and rolled backwards towards the bike cops trailing the demo, creating a bit of a buffer in the lead up to what was to come. At Lemay, people attacked the building, breaking the large windows at the front and side of the building with rocks, billiard balls, and improvised battering rams. Paint bombs covered the facade on two sides of the building as well. Flyers were distributed explaining Lemay’s role in the construction of the migrant prison.

Riot cops deployed, too late, in front of the Lemay building, and were met with rocks. They responded to the escalating situation with tear gas, and the demo turned north off of St-Jacques. Though the demo split and some people scattered due to the tear gas, minutes later two large groups met up on St-Antoine, a major artery leading to a highway on-ramp — the dispersal attempt was unsuccessful! Marching against already backed-up traffic, the raucous group dragged garbage and recycling bins into the street, lighting some on fire. Though the group continued to thin out over the next 15 minutes, a sizable demo marched east on Notre-Dame, leaving graffiti in its wake, and defending itself with fireworks shot at the cops.

This May Day was a marked improvement from last year, when a confrontation between flanking sidewalk cops and a black bloc at the front of the demo two minutes after departure isolated most of the bloc from the rest of the demo, leading the demonstration to continue but without most of the bloc. Since that confrontation, the cops have consistently kept their distance at major demos, testifying to the success of a combative demo culture. However, they are positioning themselves to go on the offensive very quickly after attacks have taken place, and we will need to continue responding to this change in strategy.

This year, the distribution of groups of anonymous and confrontational people throughout the demo appears to have prevented the isolation of the bloc from the rest of the demo. It also helped to mitigate the negative effects of dispersal attempts — having groups of people throughout the demo that are prepared to stick it out after tear gas and charges means that many others can build the confidence to do this as well. This year’s successful regroupment and the long continuation of the demo even after it had wreaked havoc on Lemay are testaments to this.

****This year, we noticed a lot of people in the demo with cameras or filming with their phones. Filming and taking pictures puts people at risk, whether or not you’re the mass media. Even if you don’t intend to hand your footage to the cops or have the intention to blur out identifying features before you post your pictures, you might get arrested with information that incriminates others. A reminder: don’t film in a demo, and don’t be surprised if you get pushed out of the demo if you do.

The success of the demo’s attack on Lemay was also an exciting development in the struggle against the migrant prison. Lemay has already been attacked multiple times in the past year (its condo projects have been attacked, and the building it is headquartered in had crickets released into it and all its locks destroyed as well), but these attacks have not been as public as this demonstration, and have presumably involved smaller groups of people. We are heartened by the strength and solidity of hundreds of people who stood and stayed together while this abhorrent architecture firm had its building fucked with in broad daylight. It’s this kind of collective strength and daring that will continue to be necessary as the fight to prevent the construction of the prison heats up in the coming months.

Long live the uncontrollable demo! Long live the struggle against the migrant prison! Against borders and against prisons!