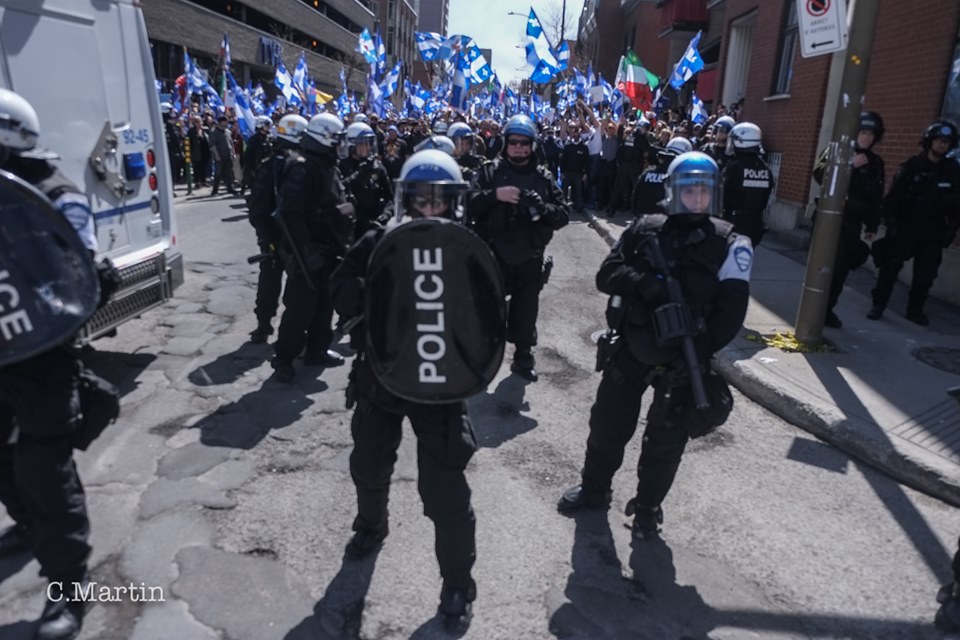 Montréal, May 6th, 2019 –The Montreal police (SPVM) was out in force today to protect several hundred Quebec nationalist bigots who had been mobilized by a handful of identitarian groups.

As we reported last week, the “Vague bleue” (“Blue Wave”) was in fact organized by activists associated with Storm Alliance, the Front patriotique du Québec, and various far right keyboard warriors. In the end it was the crème de la crème of Quebec’s frustrated nationalists, wannabe militia members, and flea market patriots – not more than 400 people – who found themselves enveloped by two lines of riot cops in front of the TVA network’s building in Montreal, supposedly to support Bill 21

As to our side, in less than 10 days the Montreal antifascist milieu carried out a solid information campaign and managed to mobilize between 150 and 200 determined people who forced the police to deploy themselves heavily around the nationalist demonstration. A police presence that the antiracists nonetheless managed to get around not one but three times!

While it was certainly a strange day in many ways, in the end we feel it was a success. First, we had a good time circling around the bozos and making the cops run all over the place. Also, if we compare the net result of the identitarian mobilization to our own, we clearly come out ahead. A complete success would have been us physically preventing their event from happening or forcing it to be canceled, but in the context we found ourselves in, such a thing was simply not possible. In such a situation, maintaining maximum pressure becomes the best we can aim for, and that is something we clearly managed to do.

In these terms, note that after three months of intense organization, out of the 2,300 people who confirmed their participation and the 5,400 who signaled their interest on Facebook, only several hundred Catholic-secularitesmurfs answered the call on the day in question. The Catholic-secularites found themselves isolated behind police lines for several hours, without access to water, food, or toilets, where nobody could see or hear them other than the police who were deployed to protect them (and even the police seemed to find them pathetic). What’s more, the lines of cops made it difficult for people who wanted to get in to their demonstration; one needed to be vouched for by someone on the inside who needed to come and meet you as you entered. Such measures were the direct result of the pressure we managed to bring to bear, and helped to reduce the number of people in their blue puddle.

On our side, we had more counter-demonstrators on the ground than Facebook users who had signaled they would be there!

What’s more, our information campaign culminated on May 4th with our distributing 5,000 flyers in the neighbourhood, to people who live in the area, to tourists and passersby. So in some ways the blue-brown demonstration by the nationalist Catholic-secularites helped us to carry out popular education and to deepen our roots in the neighbourhood.

Tactically, we managed to get around the police three times : first on AlexandreDe Sève, a second time on Papineau (where our initial contact with the “Vague bleue” immediately degenerated when police fired tear gas at the antiracists at head level; note that one demonstrator was injured when they received a canister in their face), and a third time, 45 minutes later, when the antiracists managed to regroup, taking up space directly by the “Vague bleue” in front of TVA, at the corner of de Maisonneuve and Champlain. One consequence being that the “Vague bleue” organizers had to quickly move their sound truck, which deprived them of their sound system for the rest of the day!

The third and final chapter of the counter-demonstration took the form of a protracted standoff with the “Vague bleue”, which remained contained by police lines on de Maisonneuve between Champlain and AlexandreDeSève. Once again, the mobility of the antiracists allowed them to carry out ongoing popular education around the identitarian demonstration, engaging in dozens of conversations with people from the neighbourhood (and even with some nationalist demonstrators), and to document the presence of numerous individuals involved with the far right among the ranks of the “Vague bleue”.

Amongst those we identified were many known members of Storm Alliance, the Soldiers of Odin, the Front patriotique du Québec and its security group, La Meute, the self-styled « Gardiens du Québec », a two-bit militia called the Ragnarok Nordique Société (real secular that, by the way) whose leader goes by the moniker Rednek Breault, the antisemitic tweedle dee and tweedledum from DMS (once again, real secular, those monarchist Catholic traditionalists!), « Q Anon » true believers, and all kinds of representatives of Quebec’s brotherhood of keyboard warriors, such as Robert Proulx, Stéphane Gagné, Michel Meunier, Donald Proulx, René Blaireau, Michel Éthier, Stéphane Dufresne… and at least one lost bozo wandering around wearing an Atalante t-shirt.

Finally, it is worth underscoring the irony of this demonstration for « secularism » taking place under the very ostentatious (!) Carillon-Sacré-Cœur, an old version of the Québec flag that is promoted today by the ultra-Catholic wing of the Quebec nationalist movement, including elements of the Fédération des Québécois de souche.

At least one person on the blue side got sunstroke, and we are sorry to say that there was one injury and two arrests on the antiracist side for minor offenses.

Overall, this long day out against the identitarian « Vague bleue » was a real success. We certainly had a lot more fun than the boxed in secularites! The neighbourhood defended itself against this passing shower, and reminded everyone that despite the reactionary noise and the intense opposition from the SPVM, Montreal is and will remain antiracist!