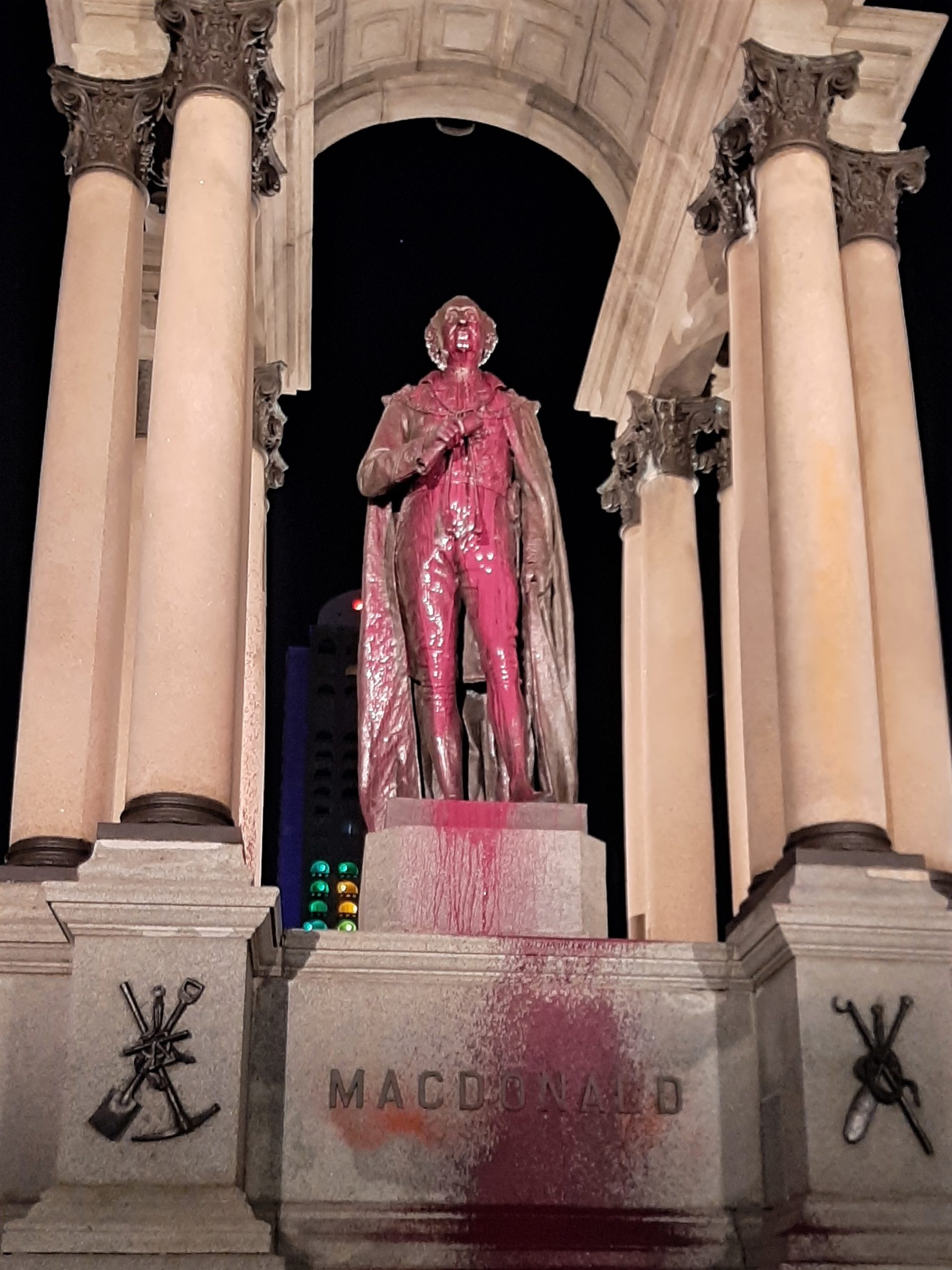 -> Photos of the vandalized statue are available here: https://postimg.cc/gallery/XY4WtR4

The anti-colonial statue vandals practiced physical distancing, wore masks, and washed their hands before and after the action.

According to Seamus Grewal, one of the statue vandals: “The Macdonald Monument is the Canadian equivalent of a racist, Confederate statue in the United States; it stands as a symbol of colonialism and the subjugation of Indigenous peoples. The Macdonald Monument celebrates an individual whose policies are directly responsible for the genocide of Indigenous peoples in Canada, and the celebration of white supremacy.”

Grewal adds: “The Macdonald Monument must be taken down immediately and put into a museum with proper historical context about racism and colonialism, and not remain celebrated in a major Montreal public space.”

Last night’s attack on the Macdonald Monument (1895) is, at least, the 15th paint attack on the statue in the past three years. This most recent action occurs as colonial and racist statues are being targeted for vandalism and removal worldwide. Racist and colonial statues have been toppled, beheaded, and otherwise attacked in the past two weeks all over the United States and beyond. Beyond the inspiring direct actions, even elected officials are pro-actively ordering the removal of racist statues.

Meanwhile, in Montreal, Mayor Valerie Plante publicly refused to remove the racist Macdonald statue in her response to a recent petition with more than 15,000 signatures demanding removal.

In response to Mayor Plante, Siobhan Dosanjh, another statue vandal,replies: “Relative to other public officials across North America, Mayor Plante is consistently indecisive in the face of racism and colonialism. She is a fake anti-racist, who continually delays or uses empty words when faced with demands for meaningful, structural change in response to racism.” Dosanjh adds: “From refusing to pro-actively defund the police, to her weak responses to Islamophobia, to her recent comments refusing to support the removal of a statue that is offensive both to Indigenous peoples as well as non-white Montrealers, Mayor Plante never misses an opportunity to miss an opportunity to meaningfully confront racism.”

Mayor Plante did propose the idea of a plaque to contextualize the Macdonald Monument. The #MacdonaldMustFall group in Montreal suggests the following wording: “John A. Macdonald was a white supremacist. He directly contributed to the genocide of Indigenous peoples with the creation of the brutal residential schools system, as well as other measures meant to destroy native cultures and traditions. He was racist and hostile towards non-white minority groups in Canada, openly promoting the preservation of a so-called “Aryan” Canada. He passed laws to exclude people of Chinese origin. He was responsible for the hanging of Métis martyr Louis Riel.”

Seamus Grewal of #MacdonaldMustFall states: “Nothing is stopping Mayor Plante and the City of Montreal from erecting a contextual plaque,something they could have done years ago. But mentioning a plaque now just serves as a distraction from the inspiring anti-racist momentum targeting symbols of racism and colonialism for removal. In the meantime, the paint we sprayed today should not be removed, because if it is, the statue will almost certainly be attacked again.”

P.S. Respect to the other anti-colonial vandals who recently spray painted “RCMP kill native women and men” on the Macdonald Monument.