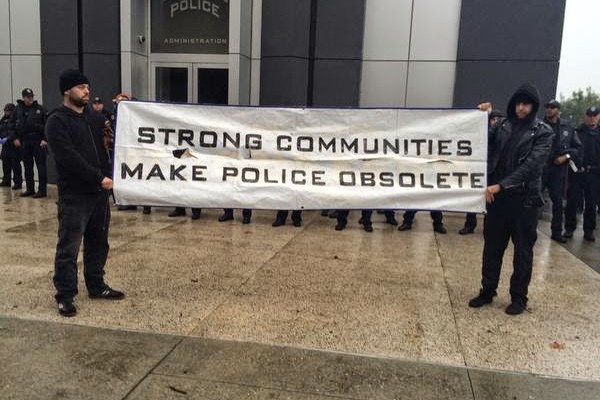 From Stones and Sticks and Words

His death caused outrage, and drew attention to the issue of police brutality towards Black people in Ottawa. Anti-Black racism, and police violence towards Black people has been one of the central political issues of the past two years. This is a short essay that analyzes policing, and some thoughts about what to do to end the violence of policing.

First, I want to acknowledge and affirm that Ottawa, and the entire Ottawa river watershed, is the stolen land of the Algonquin nation. The colonization of Ottawa, and Canada, is the backdrop of the present day fight against the violence of policing. Two hundred years ago, the Algonquin controlled the area, there was no modern police force, and everyone lived according to Algonquin law. It’s the theft of Algonquin land and the genocide of Algonquin people that makes the existence of the City of Ottawa, and the Ottawa Police Service (OPS), possible.

Settler activists in Ottawa have to ask themselves what it means to work for police accountability and transparency, as well as ending all of the violence connected to policing and prisons, when the OPS is a settler police force that enforces the settler laws of a nation and city that exist on stolen Algonquin land. More broadly, activists working to end the violence of policing have to take this colonial context into account in their organizing no matter where in Canada they are.

Police don’t impartially enforce Canadian law, and Canadian law is not impartial: Canadian police officers, police forces and Canadian law privilege certain groups, and oppress others. Groups that are targeted (criminalized) experience higher levels of violence, arrest and incarceration. Many different groups are targeted, including Black people, people of colour and Indigenous people, migrants, poor and working-class people, especially homeless people, street-based sex workers and drug users, people with mental health problems, as well as queer and trans people. Individuals who are members of more than one of these groups are more likely to be attacked, or arrested, or both, by the police.

As few of the recommendations are implemented, it is only a matter of time before there is another incident of police racism and brutality, such as the murder of Abdirahman Abdi by Const. Daniel Montsion and Const. Dave Weir of the OPS.

There’s a reason that the recommendations from the reports on anti-Black racism in the criminal injustice system haven’t been implemented. Many reasons, really, but at the end of the day it’s because policing isn’t broken; it’s working for capitalist and colonial interests. The police, and the governments they work for, have been reluctant to implement reforms because police doing violence to oppressed people is, sadly, part of what the job is really about.

Political policing focuses on people and organizations that the Canadian state and the political police consider to be subversive and harmful to so-called national security.

Political policing exists to protect political and economic elites and it attacks people, groups and organizations that these elites consider a threat. For much of Canada’s history this has meant Communists, but more recently the political police have targeted Black nationalists, migrants, and Quebec sovereigntists. Today, Muslim, Indigenous and environmental activists are particularly targeted, while the political police still continue to attack socialists, communists and anarchists.

A recent example of political policing is the RCMP’s Project SITKA. Project SITKA aims to identify members of the leadership of Indigenous resistance movements, especially those who are willing to use “tactics…outside the spectrum of peaceful and lawful demonstration”. The purpose of identifying them is, of course, to neutralize them and reduce or end their effectiveness as activists and leaders. While Project SITKA only identifies 89 individuals, hundreds, maybe thousands, of (primarily Indigenous) people were investigated.

As stated above, political policing emphasizes intelligence gathering in order to control targeted groups. An excellent example of this comes from the Project SITKA report, where the RCMP says, ““In order to be intelligence-led, the National Intelligence Coordination Centre strives to collect all available intelligence and information related to known or anticipated threats. This information is to be acquired through a wide variety of sources, including open source information, a review of police occurrence reports, and other investigative techniques.”

Organizing to End the Violence of Policing

To be effective, organizing for police accountability and an end to police brutality has to make sure not to inadvertently increase the strength of the police. For example, in the US, the police and the Prison-Industrial Complex have been greatly strengthened by liberal reforms that were in principle implemented to reduce police misconduct. More regulation and oversight of the police, rather than reducing police violence, has, in fact, aggravated the problems that liberals said it was intended to resolve.

Activists interested in ending the violence of policing have to pursue reforms that reduce and limit police power while working for strong, healthy and safe communities. They must also refuse to work with the political police in their efforts to gather intelligence on, undermine and control our communities and movements.

Ending the violence of policing is a part of broader struggles: struggles for racial and gender equity in the workplace, for accessible, quality and relevant education for all, for decent, and affordable housing for all, higher welfare rates, a living wage, good quality and culturally appropriate support for people with mental health problems, and much more.

The Justice For Abdirahman Abdi Coalition

Naomi Murakawa & #BlackLivesMatter: Liberals, Guns and the Roots of the U.S. Prison Explosion

Gary Kinsman and Patrizia Gentile, The Canadian War on Queers

Tim Groves, Living among us: Activists speak out on police infiltration

SUBMISSION TO THE ANTI-RACISM DIRECTORATE