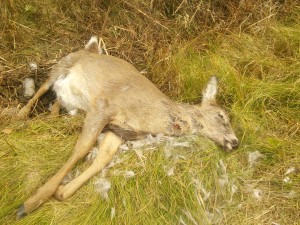 “Because Black December is not a staged repetition of previous insurrectional events, but rather a circle of struggle that connects the past with the present, in search of a future where our everyday life will be inundated with acts of attack and rebellion against Power.

Because, although our bodies are incarcerated between walls and bars, our souls are found in every part of the planet where flags of resistance are raised for a world of freedom.

Last December 31st in the evening, an angry person (me) went over a rather vast distance to a terribly-gentrified neighborhood by the Lachine Canal in Montreal to put an expensive BMW on fire (on Duvernay between Charlevoix and Levis St). I’ll call it an attempt, as I wasn’t around to see what actually happened… yet if no stupid citizen took the risk to intervene to keep the fire from destroying a car, it should have worked. But there is no guarantee.

Molotoving this damn machine would have been surely more certain. Though at this busy time of the evening, in one of the busiest evenings of the year, I couldn’t afford the risk so I went for a more discreet approach involving chemicals. Hence, I just slipped under one of the rear tires a cup of coffee half-filled with dry chlorine and added some brake fluid to it, then flew the scene without a fuss. I tested this recipe many times already so there’s no reason why it shouldn’t have worked, especially on tires. Here’s for the explanation.

On the other hand, there are also good reasons why this arson may have been silenced by the police and the mainstream media -or just neighbors who wouldn’t bother calling the cops over a suspicious coffee cup- especially given how this neighborhood is filled with some of the city’s “innocent” upper middle-class, including fancy members of the Inner Party. Obviously they would seek to avoid a scandal with the potential of causing discomfort among this disneyland of the petty bourgeoisie and challenge their disgusting yet delusional sense of social (and racial) supremacy, with all the intestine fluctuations of credit-bubble flatulences this might involve. So, maybe maybe.

The only way to make sure that it gets there, for all those sickened by this near-overtly fascistic social formatting -a.k.a “gentrification”- to not have it further steered away from “public view”, would be to keep reproducing such tactics more and more, in busier spots when possible, so that a real inevitable situation is brought upon these small capitalist rats. We need a sustained insurgency taking as many forms and aspects as there are beautiful colors in the rainbow of your clique, your clan, your cult, your couple and your crew.

Especially to gtfo of these accomodating enclaves might help. If a wanker like me could manage to move my ass out of my own, away from the usual apathy of my buddies just to smash a bit of society… so this possibly means YOU CAN DO IT.

So you may as well -though not limited to- drop syringes and dog poos on the sidewalks of trendy areas… pepper-spray more bougie bar & grills… punch some White male yuppie’s smug face and poke your fingers in their shallow eyes… dress and make up as a petty bourgeois hipster yourself to fuck everything up from the inside… or just do a really funny surprise attack out of nowhere to trash their places… with their own trash of course. It’s up to you. So many possiblities to grab!

I did that in the context of Black December in solidarity with Michael Kimble and all the other prisoners who’ve been taking part in the recent uprisings in Alabama, along with Emma Sheppard in Britain, the invincible Nikos Romanos, Sean Swain, Nicole Kish, MARIUS Mason and the Hammond brothers.

But it was primarily as an act of revenge for a female deer that, roughly a year ago somewhere in the Eastern Townships, was found dead in a ditch on the side of the road, while she was still pregnant. (picture of her attached) It will take hundreds of burned cars to sooth my anger about this poor defenseless creature. So I’ll keep doing this no matter what.

– an Individual from the Plateau Crew

P.S.: praises to the few in Quebec who managed to make New Year’s Eve noise demos in front of at least three prisons outside of Montreal. Let’s keep spreadin’ this shit broad and wide! 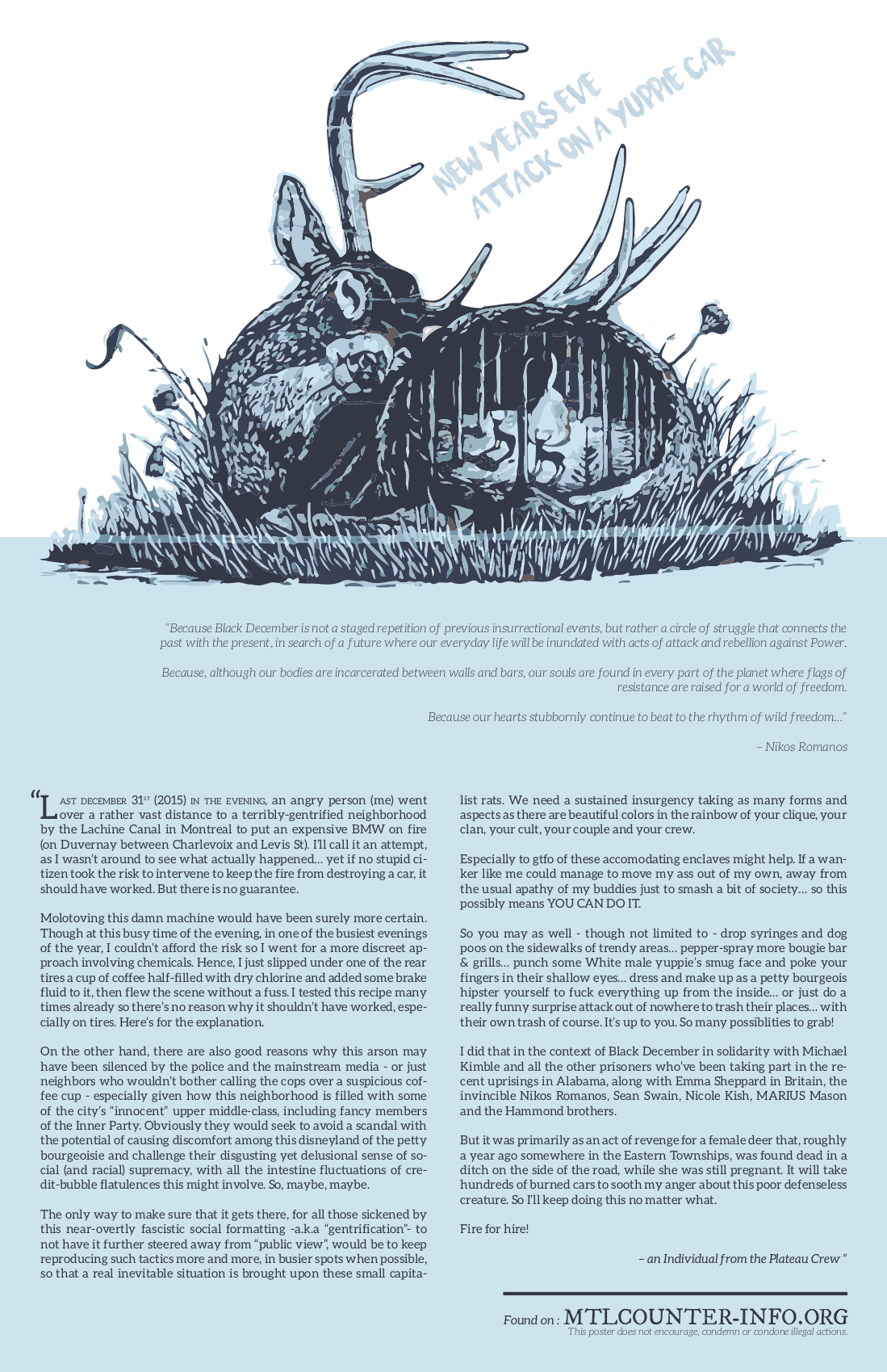