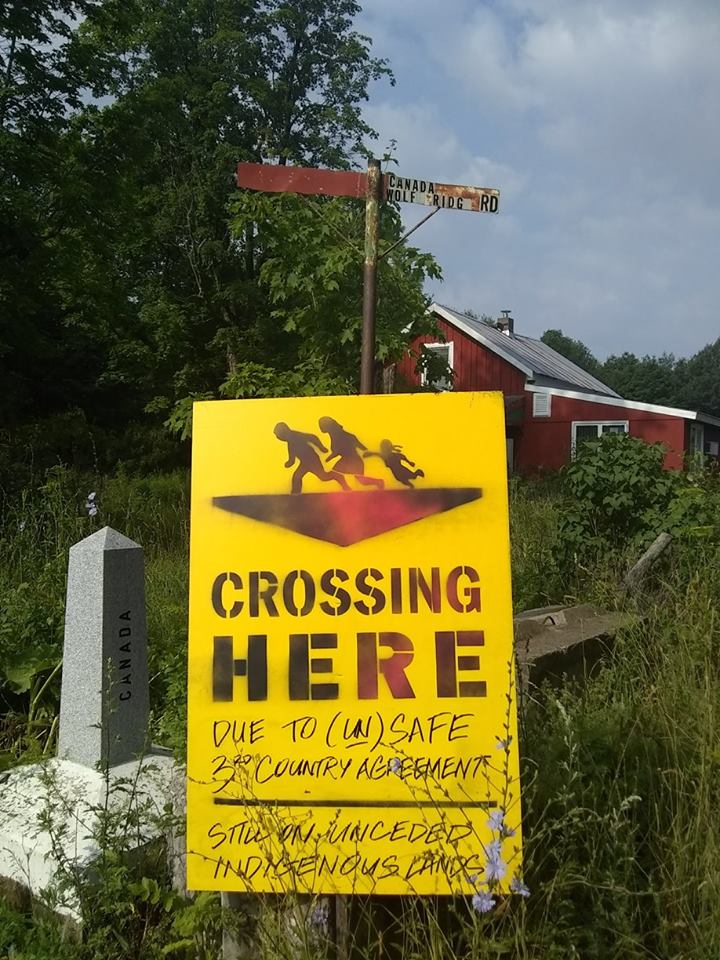 There are multiple sites similar to Roxham Road every few kilometers along Quebec’s border with the United States. In addition to sending a message of support to refugees and migrants who are crossing irregularly from the United States, this action was meant to encourage people living in the area to actively support them – to open minds and hearts, and, in a very literal sense, to Open the Borders.

The signs draw attention to the reason people are crossing in this way: the so-called Safe Third Country agreement, which prevents migrants from making refugee claims if they go to a regular border crossing. They also question the legitimacy of the border and the Canadian state, established by European colonial powers to consolidate control over stolen lands and resources.

The action marked the end of the “Refugees Welcome Caravan” which was on the road from June 29th to July 1st, traveling along the Canada-US border from Coaticook to Huntingdon to build support in the border region for migrants. At public gatherings such as an antique car show in Venise en Québec and a farmers’ market in Frelighsburg, shopping mall parking lots, and city centres, the caravan attracted attention with a musical procession, juggling and fire tricks, while passing the message with posters, flyers, speeches and improv theatre. Over the three days, more than 60 people – from Montreal and the region – participated in the 10-car caravan, which spent the two nights in a church and a farm.

The vast majority of people the caravan met supported the message of welcome to refugees. Caravan participants took the opportunity to exchange with people who thought Canada was much more welcoming than the United States and those blinded by racism into believing the fear-mongering propaganda of the right-wing and populist politicians in the hopes of shifting their perspective to the points of view of the oppressed.

Despite current public attention to the violence of the American immigration system, Canada continues to close its border to migrants coming from the United States as refugees. When people manage to cross irregularly, Canada’s refugee system is the next barrier they face: less than 50% of people whose files have been heard (as of March 2018) have been accepted. People who are rejected are deported or forced into precarity as undocumented migrants.

Solidarity Across Borders rejects the case-by-case approach and calls for status for everyone crossing the border. Though Canada is certainly no paradise, people are coming because they think it is the best option for them. No one should have to go through the stress, precarity and humiliation of trying to prove they are a refugee and why they deserve to stay here. No one should be threatened with deportation. No one should be stripped of status and be forced to live in the shadows, prey to exploitation and fearing discovery.