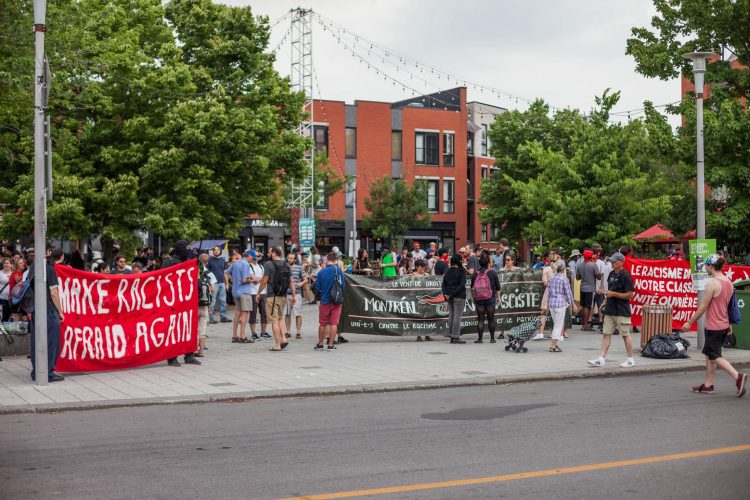 Before the weekend of action

On June 23rd, the addresses of a La Meute activist and another from Storm Alliance who live in Hochelaga were revealed and they were paid a little visit.

June 27th, CRAM shared the claim for the painting of the Maisonneuve and Macdonald monuments.

The weekend of action in photos 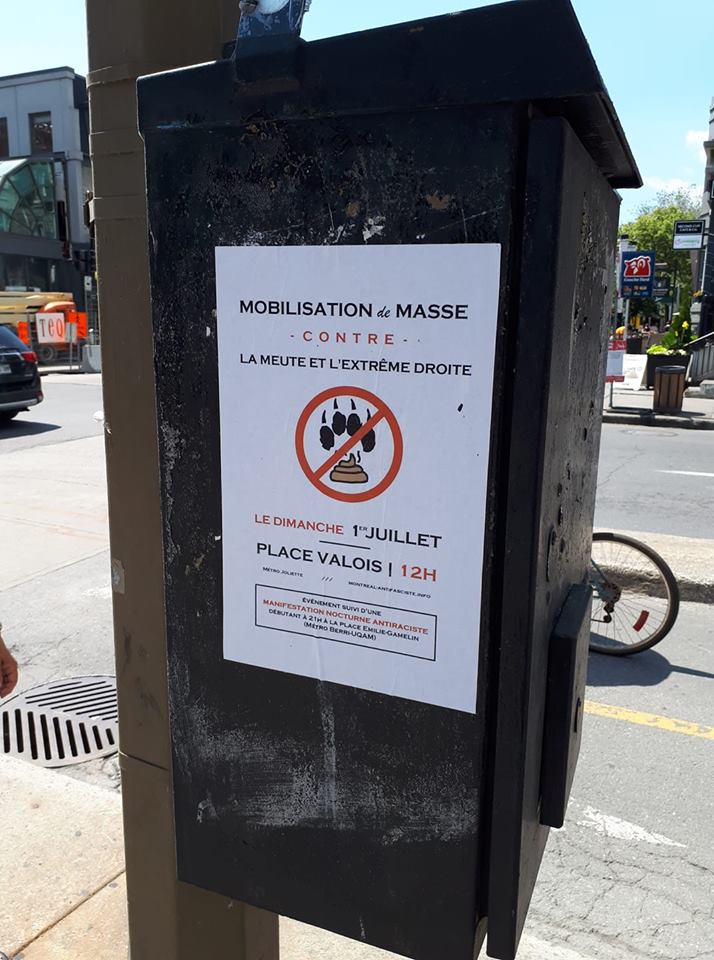 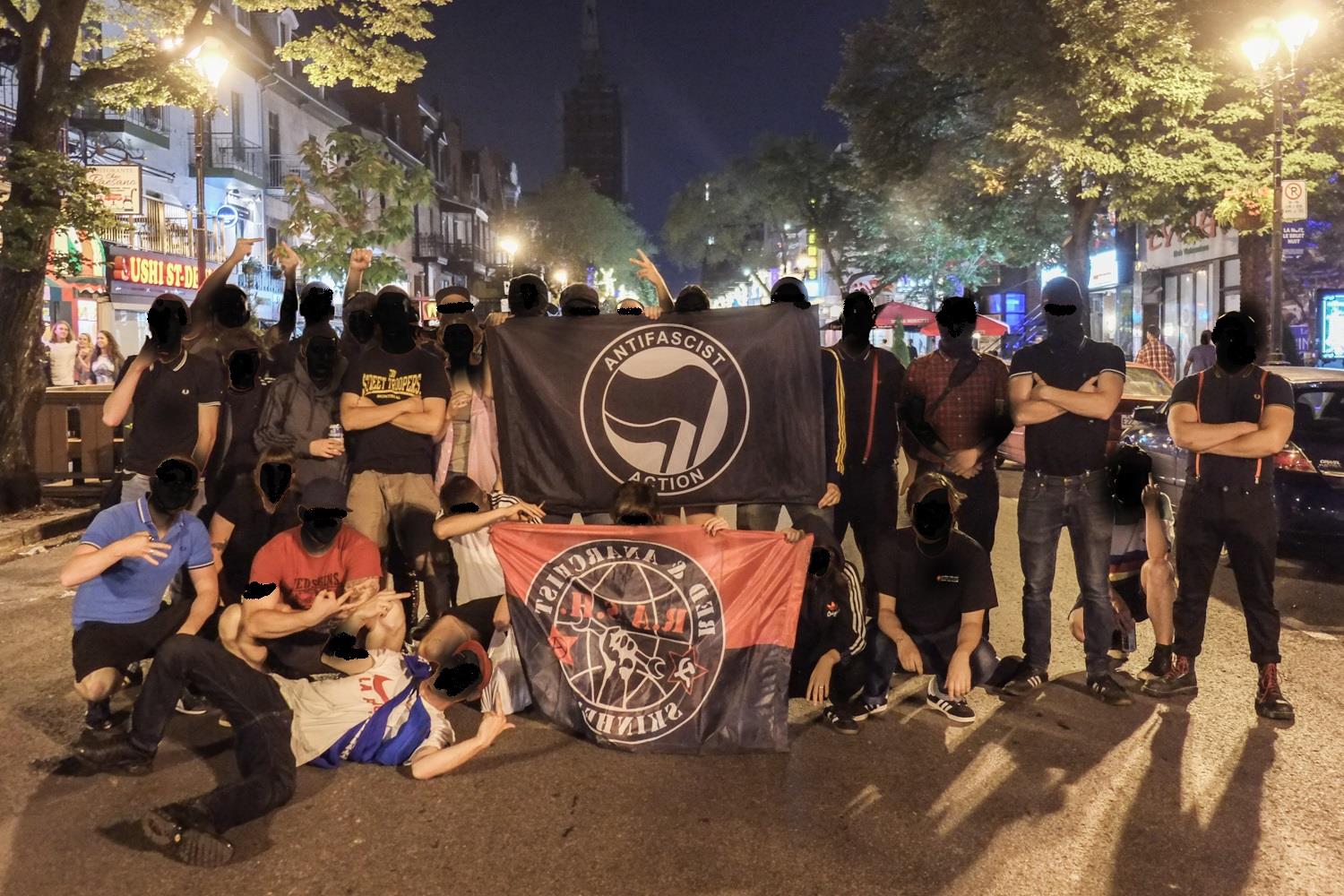 Many flyers and posters were distributed for the antiracist demonstration, as well as a tour of the Quartier Latin and downtown. 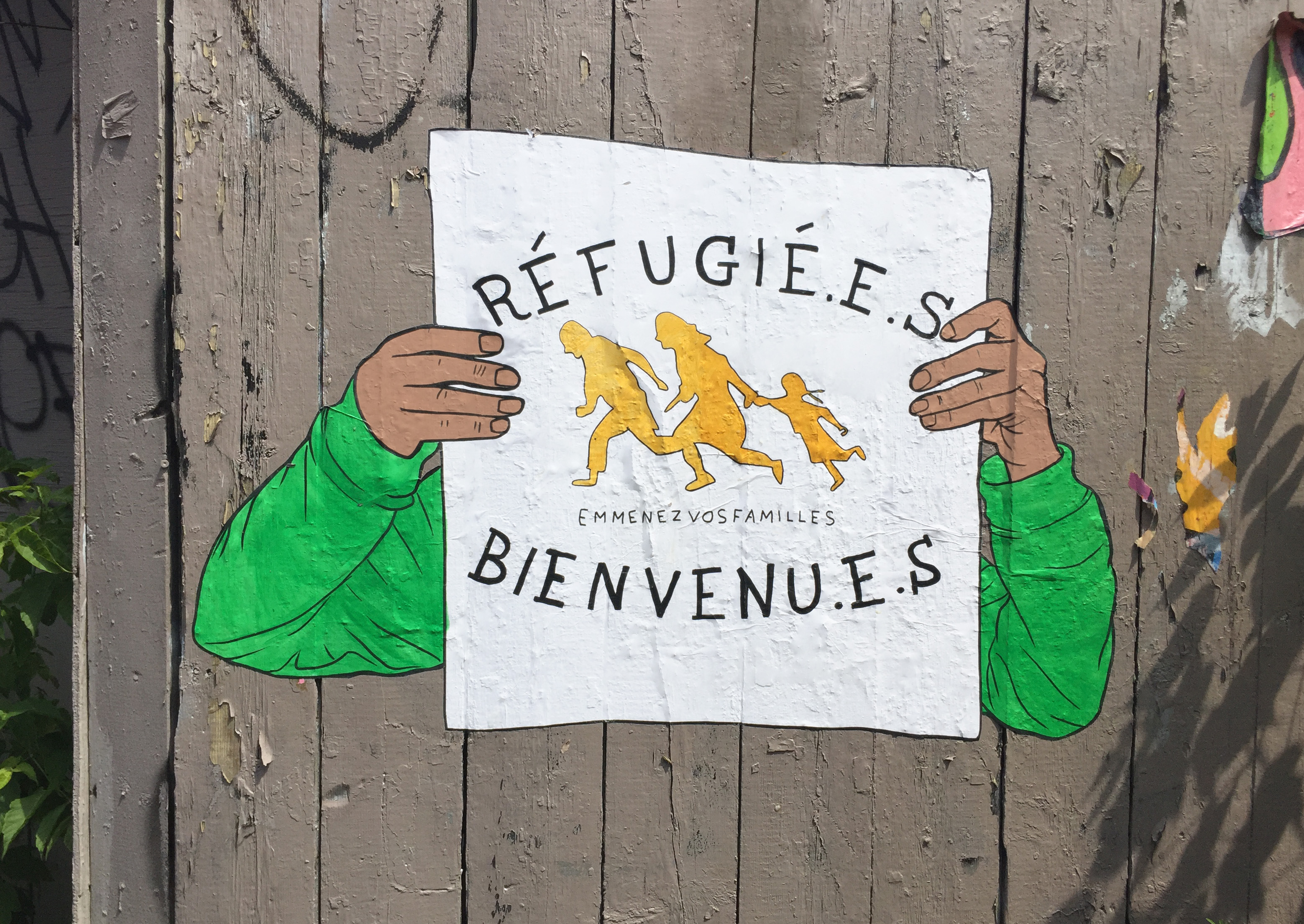 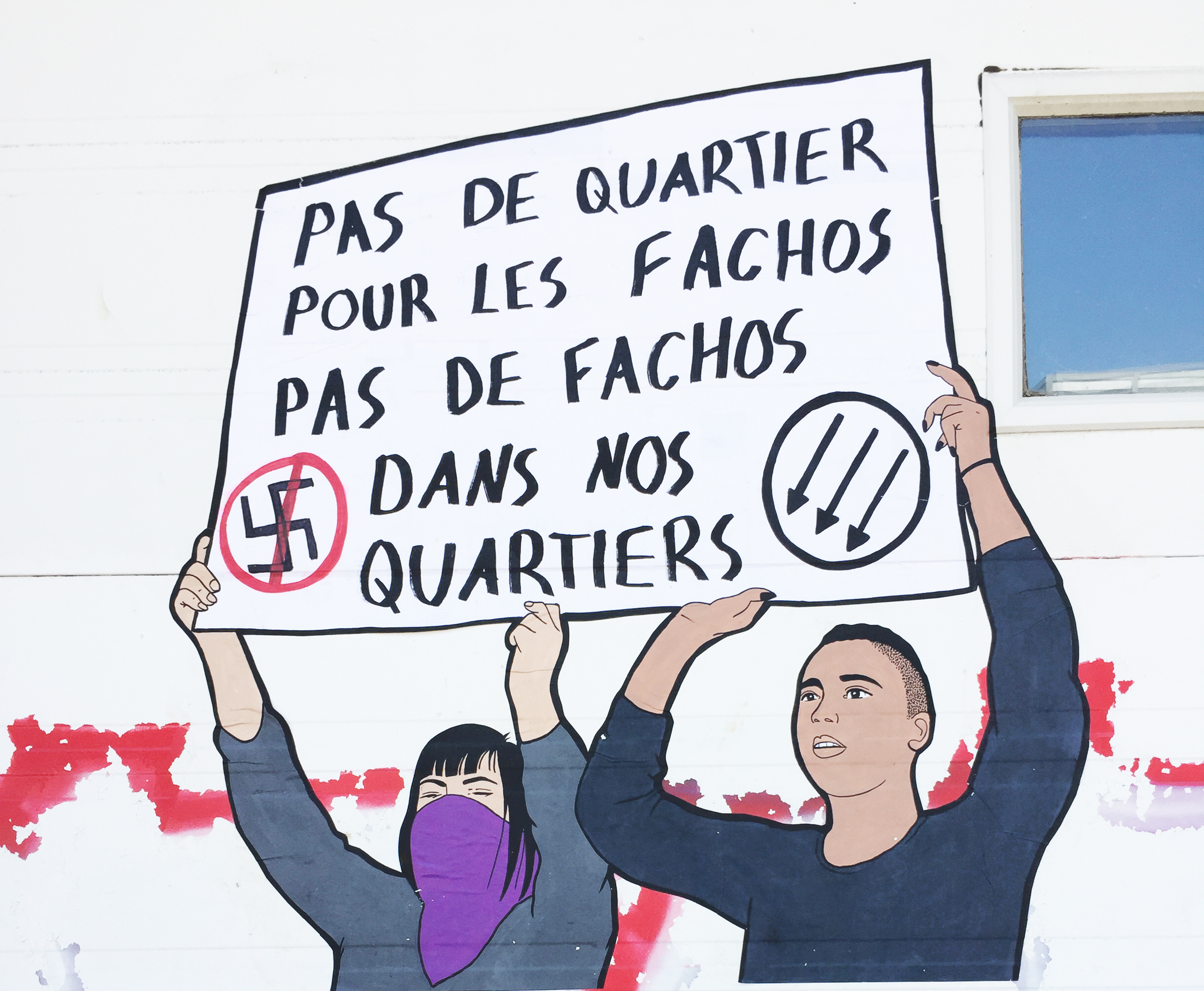 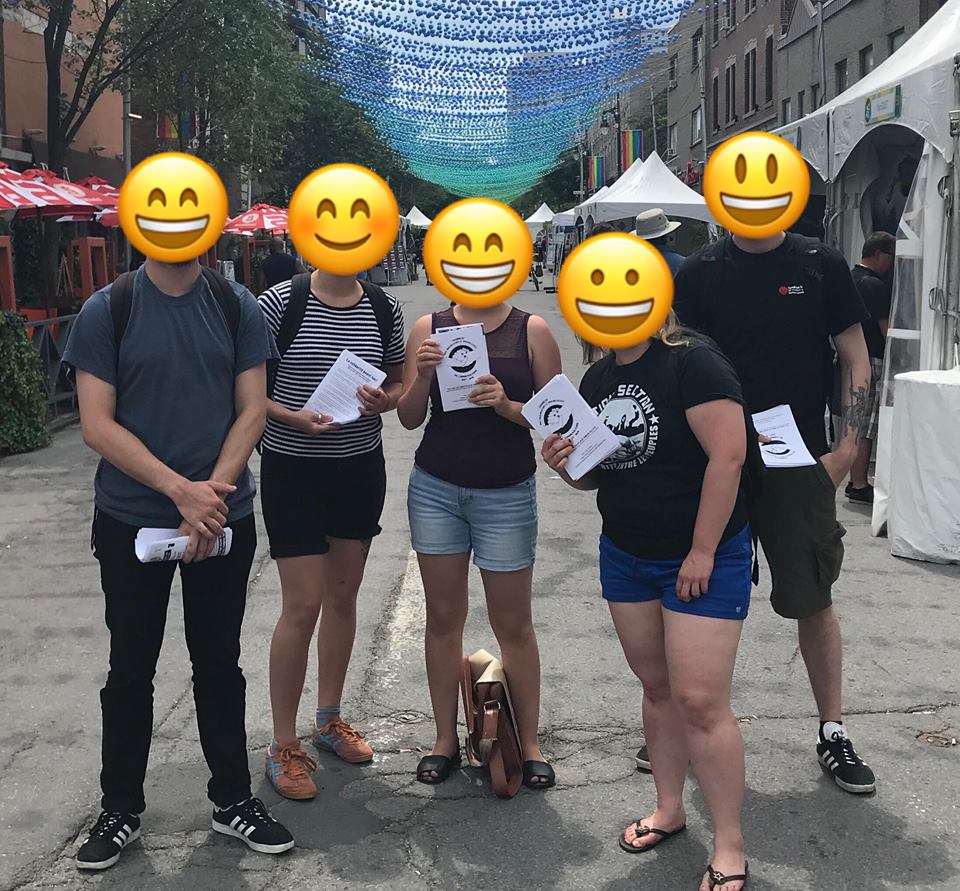 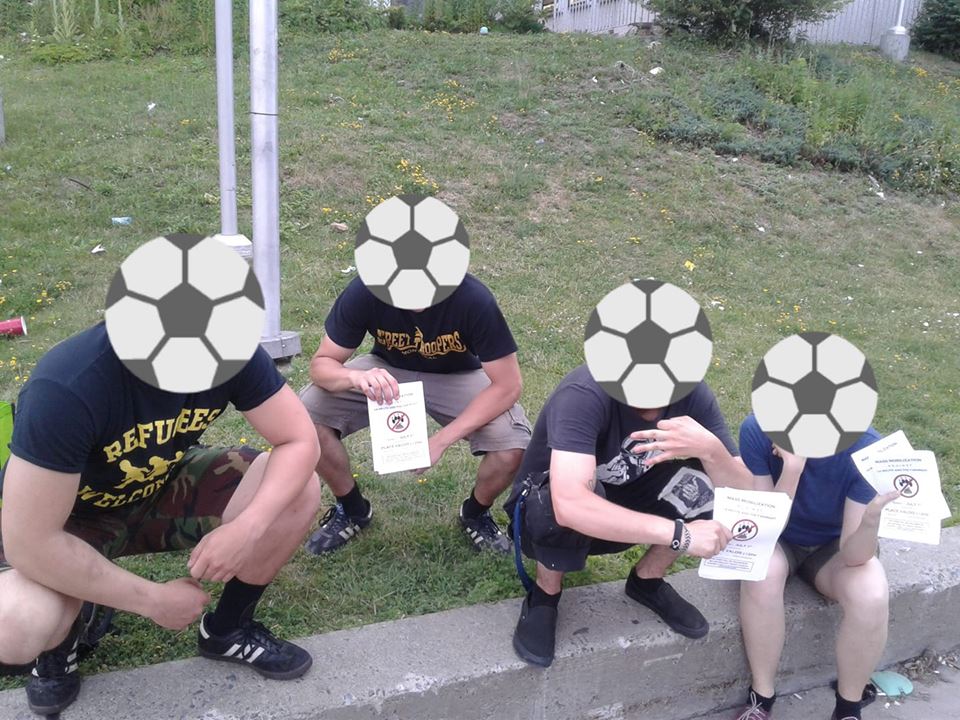 Antifa flyering before the Impact game at Saputo Stadium. 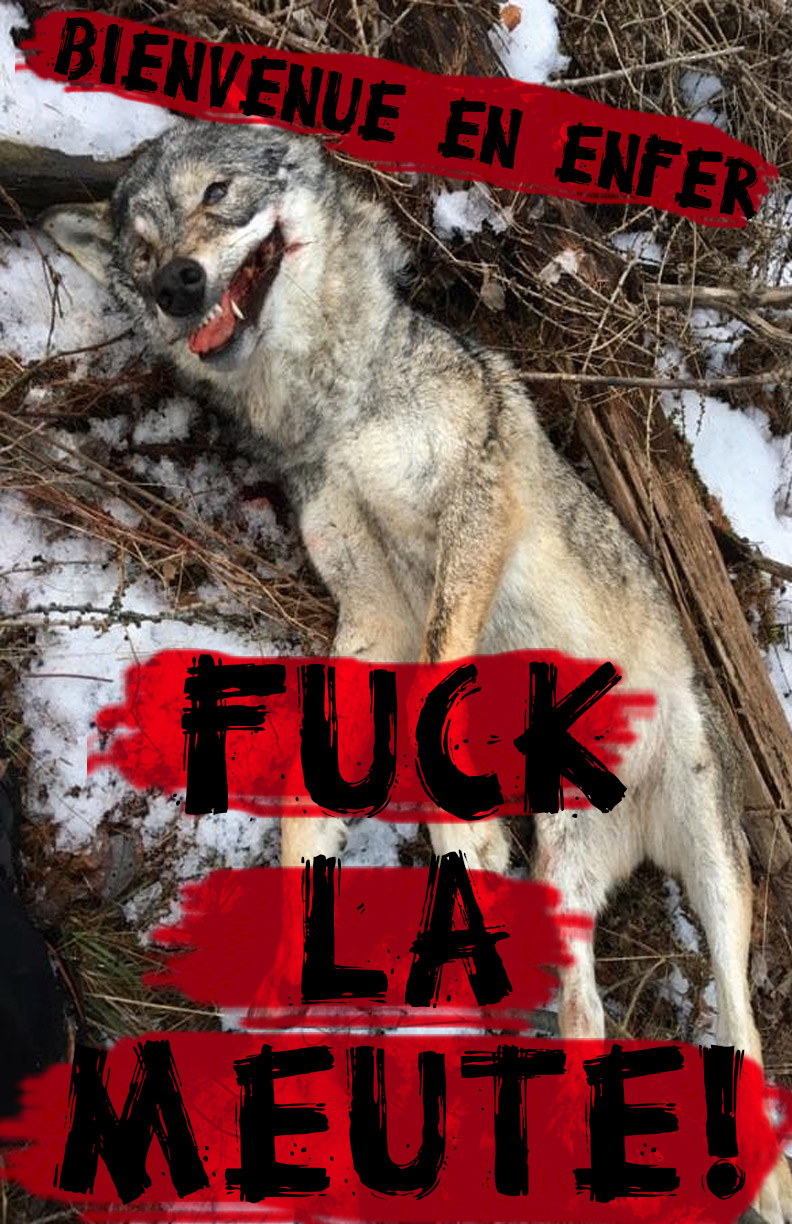 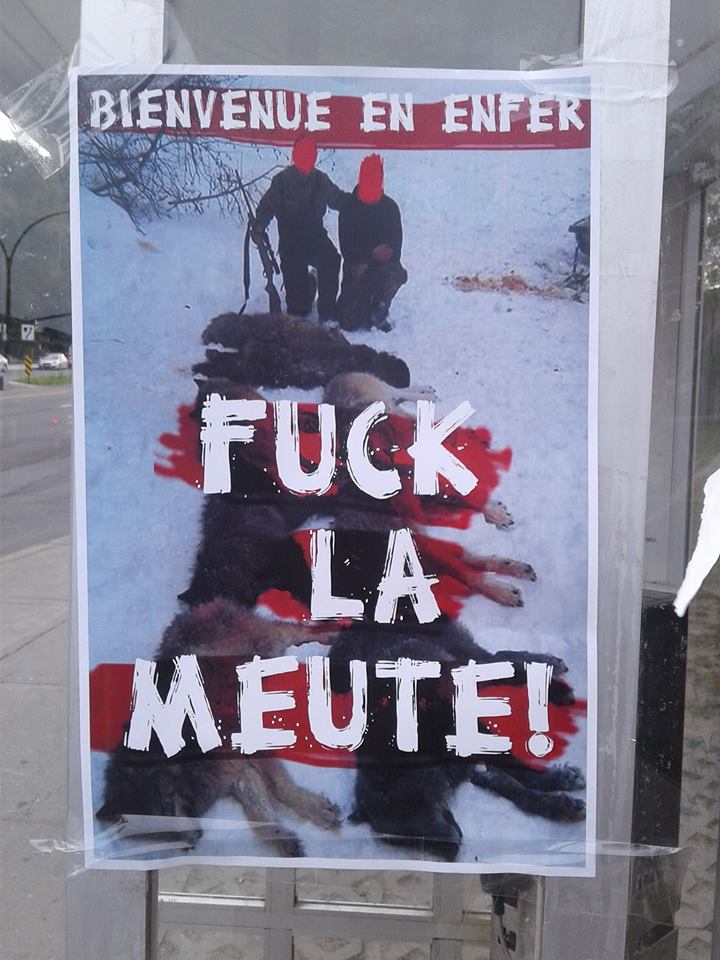 “Welcome to Hell” posters went up in front of a dozen metro stations and in front of La Meute members’ homes. 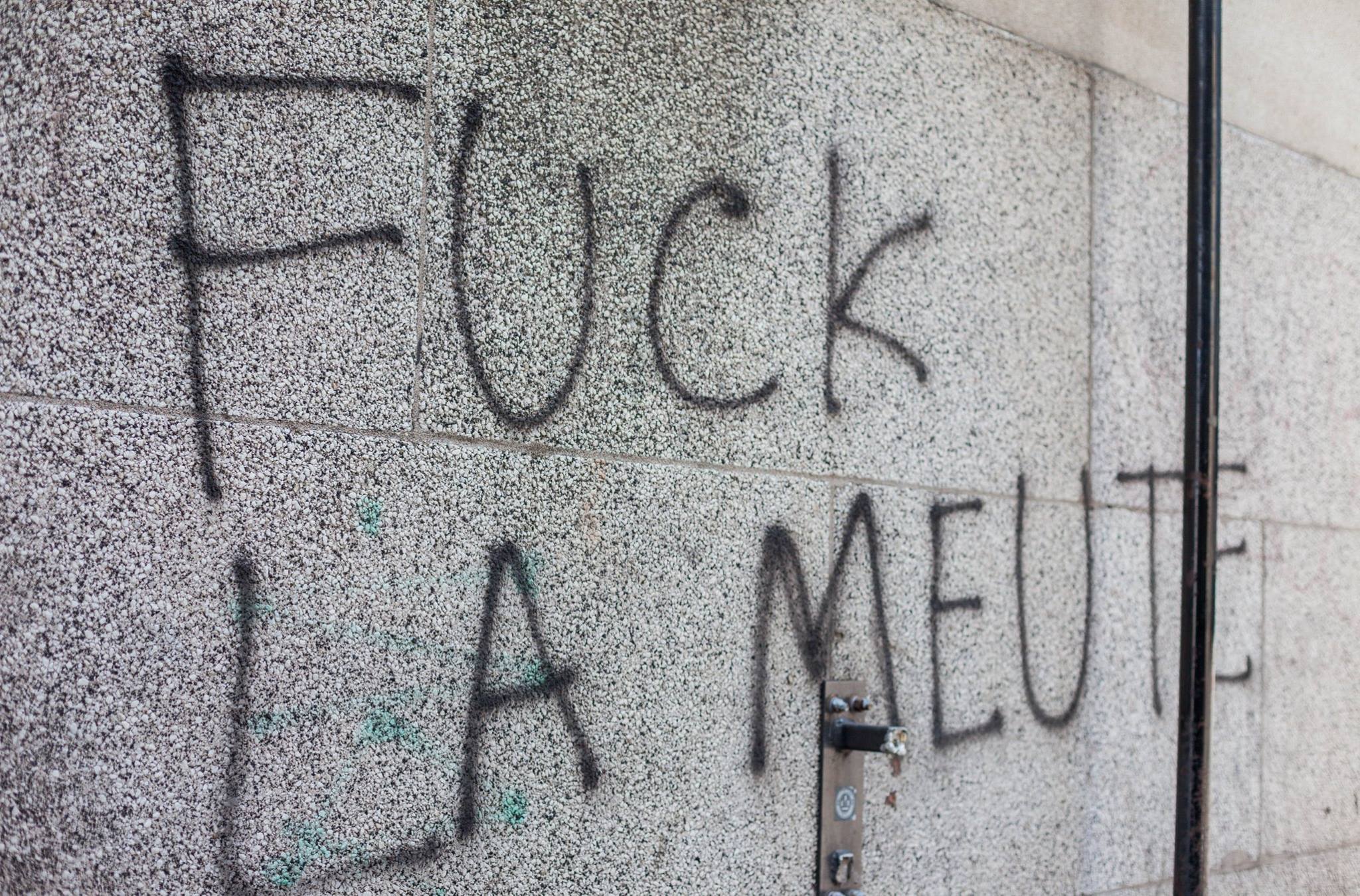 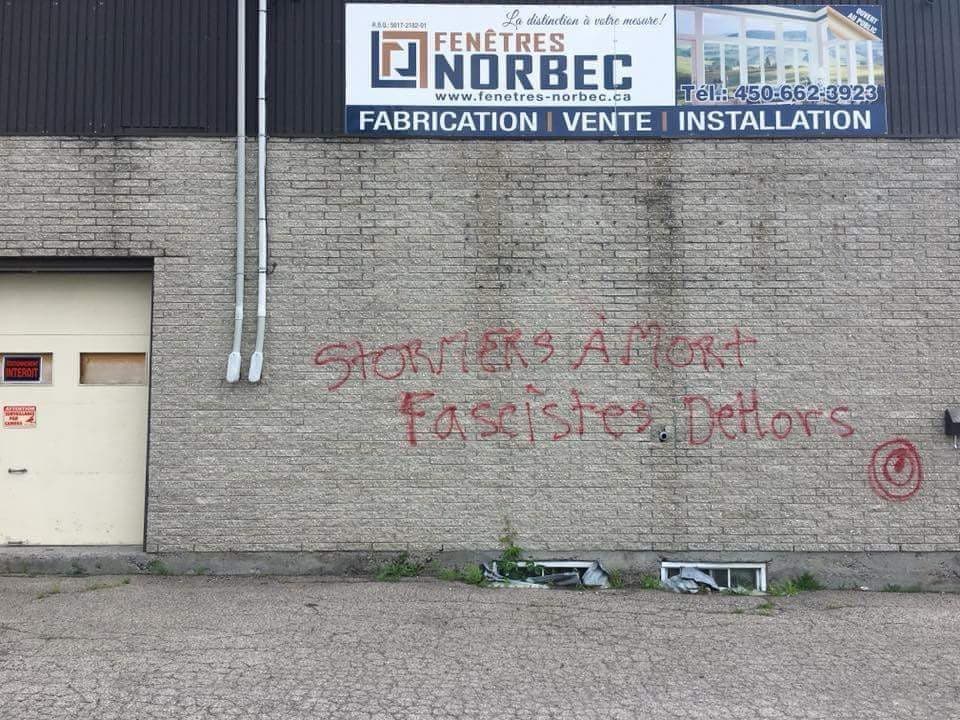 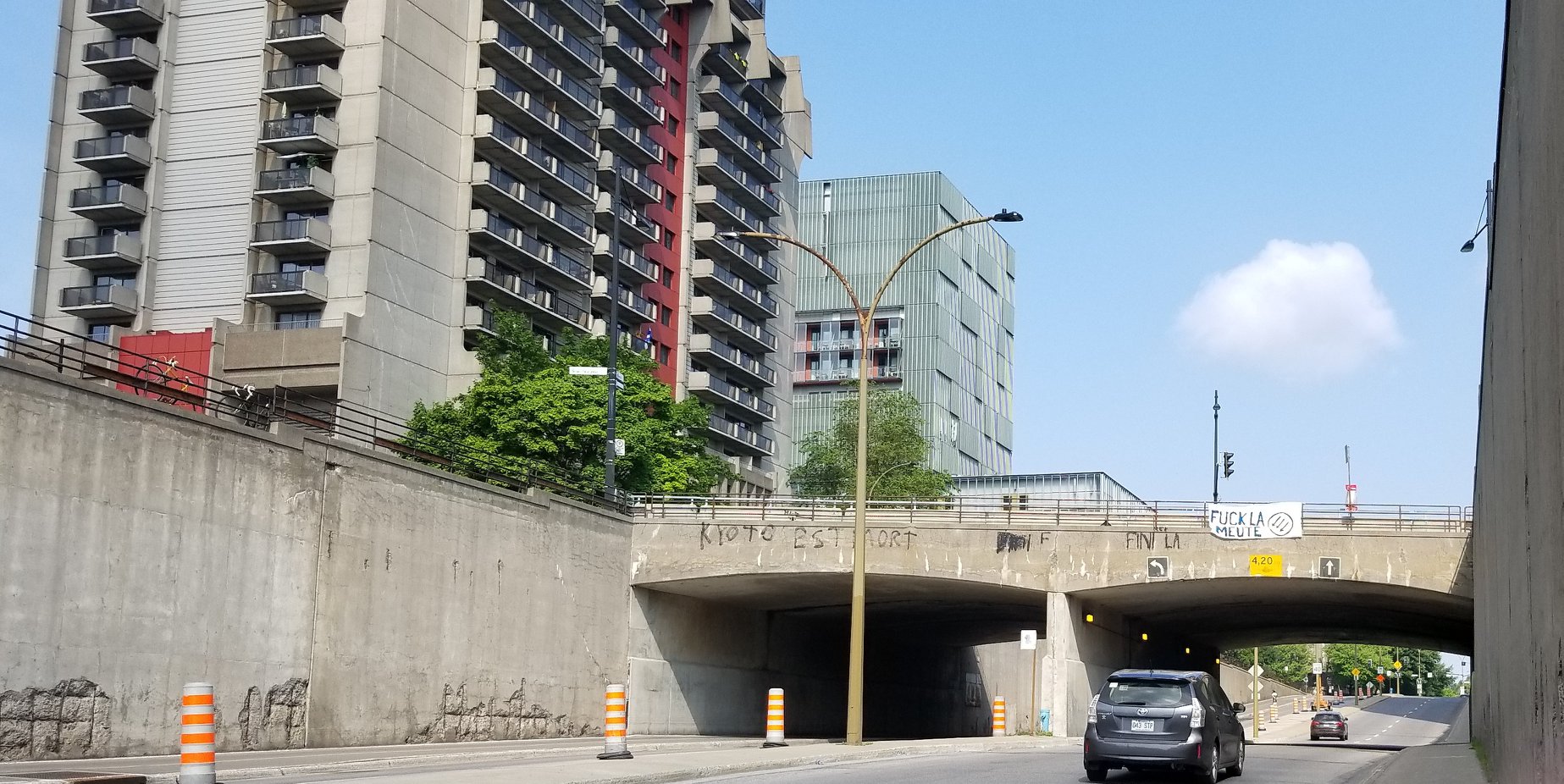 The morning of July 1st, BASH UQAM dropped two banners against La Meute and racism off the Berri street bridge in the Quartier Latin. 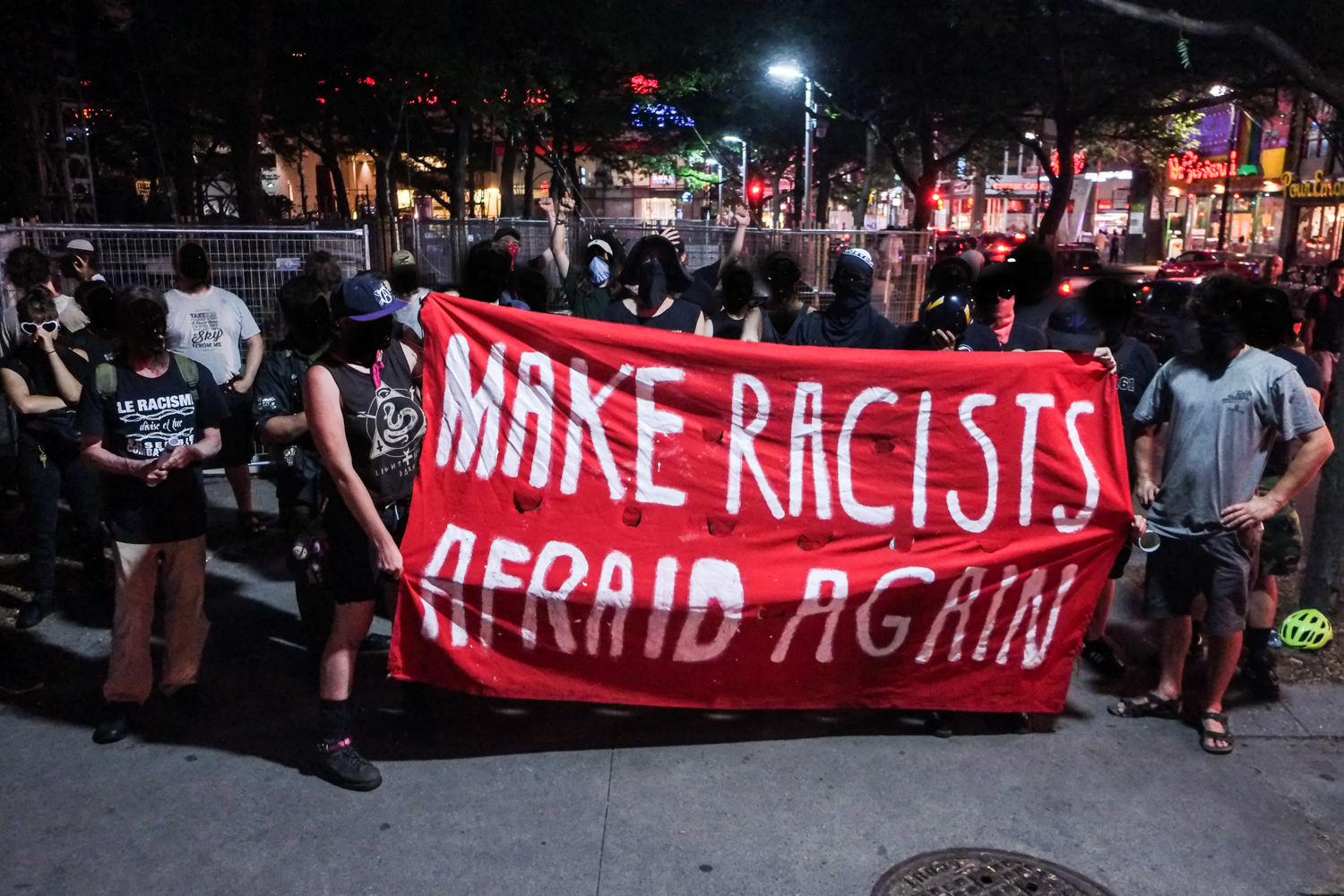 That evening a night demo had been called in case there was a need. Following the victory, around 75 people gathered and took a little photo to send a message to all the racist and hateful groups. 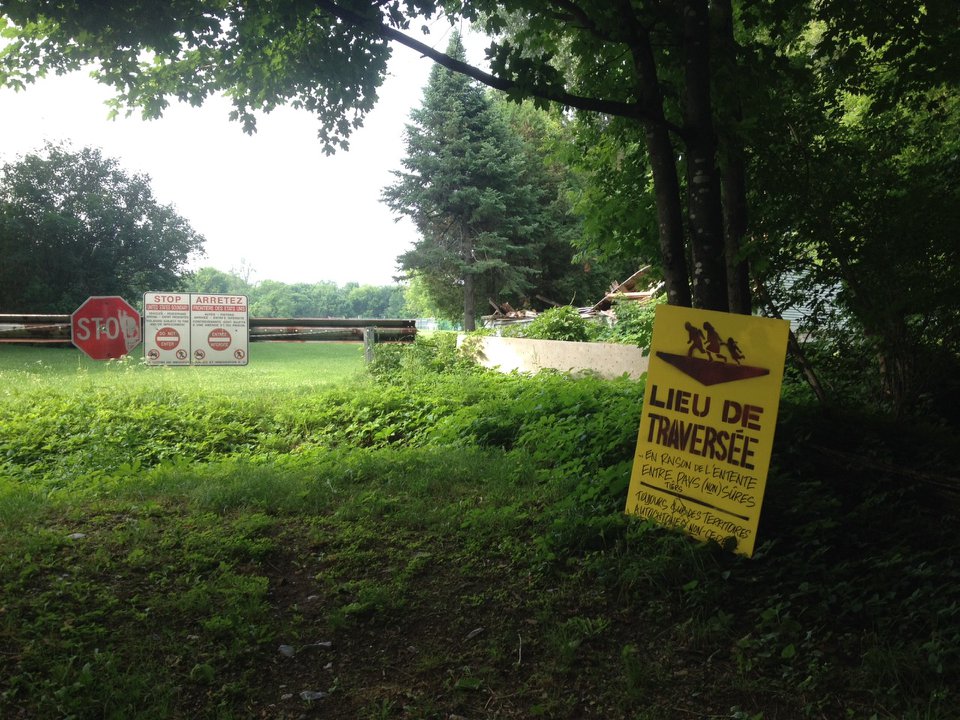 From June 29th to July 1st, Solidarity Across Borders did an info caravan through a number of towns and villages close to the US border, to strengthen solidarity with migrants. 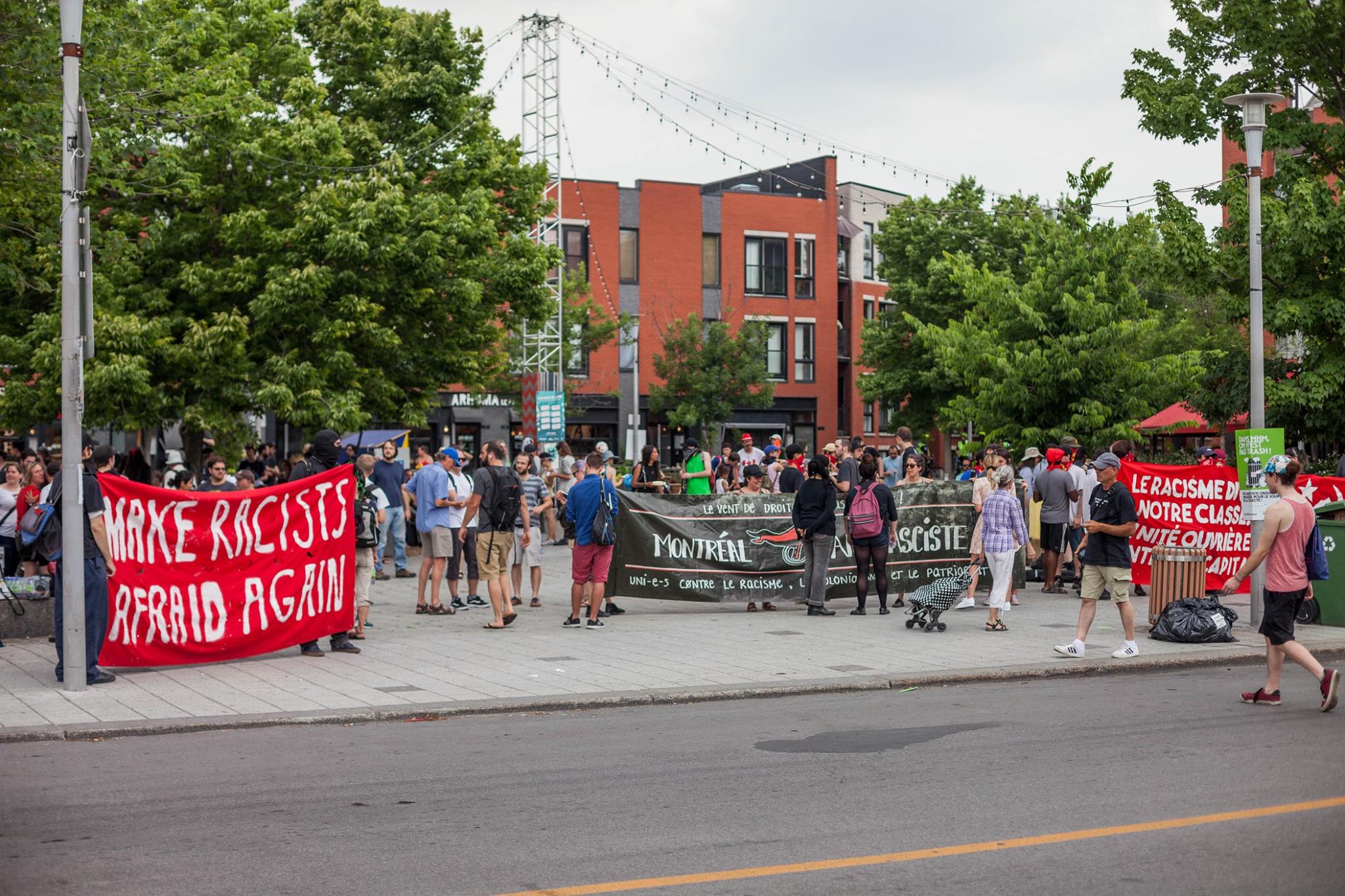 At noon more than 250 people joined a gathering at Place Valois in Hochelaga. At 1pm, around 200 people split into two then three groups to block the gathering of La Meute and Storm Alliance around Saint-Antoine street downtown, for 5 hours, preventing them from marching. At some point a group of 5 people from La Meute’s security attempted an exit, maybe to go pick up their water bottles and signs which had been left in a car to the south. They were pushed back with eggs, rotten tomatoes, and smoke bombs. Towards the end of the day a school bus was vandalized. It gave them some A/C for the ride all the way back to Saguenay…

A nice victory – we promised them hell, they got a taste of hell.

Let’s keep up the fight, fascism shall not pass! Another call to action will be published later in the summer, stay tuned!