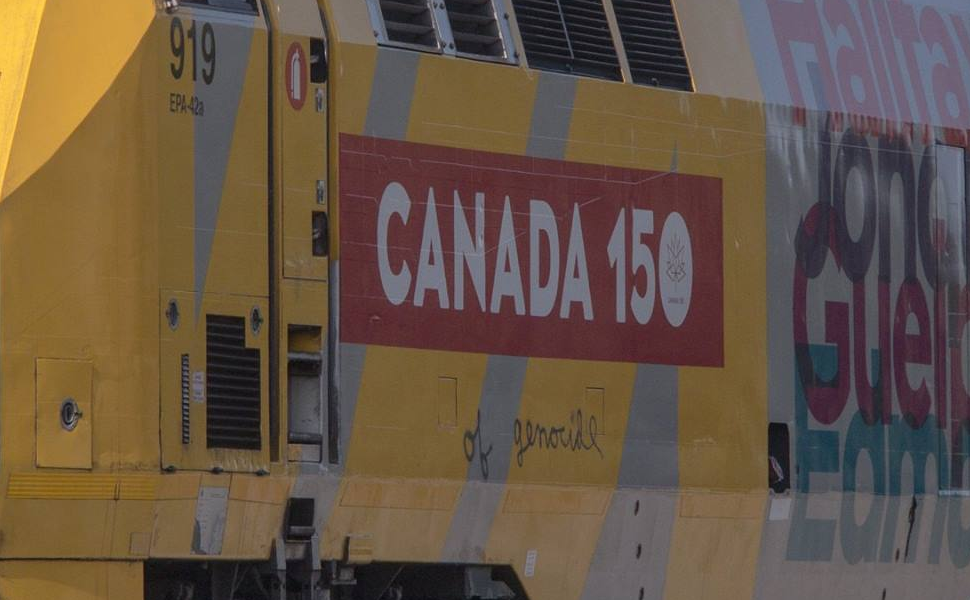 On Sunday September 10, we mobilized in solidarity with the ongoing resistance against the extractive oil industry in Gaspésie, in particular, Junex and its investors. Corporations like Junex (and their investors) collude with provincial and federal governments. These collaborations exemplify how neoliberal capitalism (as the current economic and political context) functions to sustain the settler-colonial state of Canada. Recently announced legislation allowing for drilling and fracking in rivers and lakes within so-called Quebec demonstrates such complicity to the point of absurdity – the state no longer seems to even care about making it appear that its role is neutral in paving the way for the poisoning of water and land for capitalist profit.

The demonstration met at Cabot Square, whose name was denounced, and a Mi’gmak flag was hung from the colonial statue, as well as a banner that read “Colonisateur ≠ explorateur” [coloniser ≠ explorer]. The first part of this demo wound through downtown before reaching St. Henri. Chants rang out of “Les pétrolières nous font la guerre, guerre aux pétrolières” [The oil industry makes war on us, war on the oil industry]. Some individuals within the demonstration had the goal of reaching the rail crossing at rue Courcelle just north of St. Jacques in order to set-up a temporary blockade. Several times in this south-west neighbourhood the police tried to control our movements, and force us to move in the direction of traffic. However, we evaded their attempts in creative and celebratory ways. There are fews things that can compare to the rush of exhilaration and playfulness some of us felt while out-manoeuvring cops on bikes, in vans, and on foot. 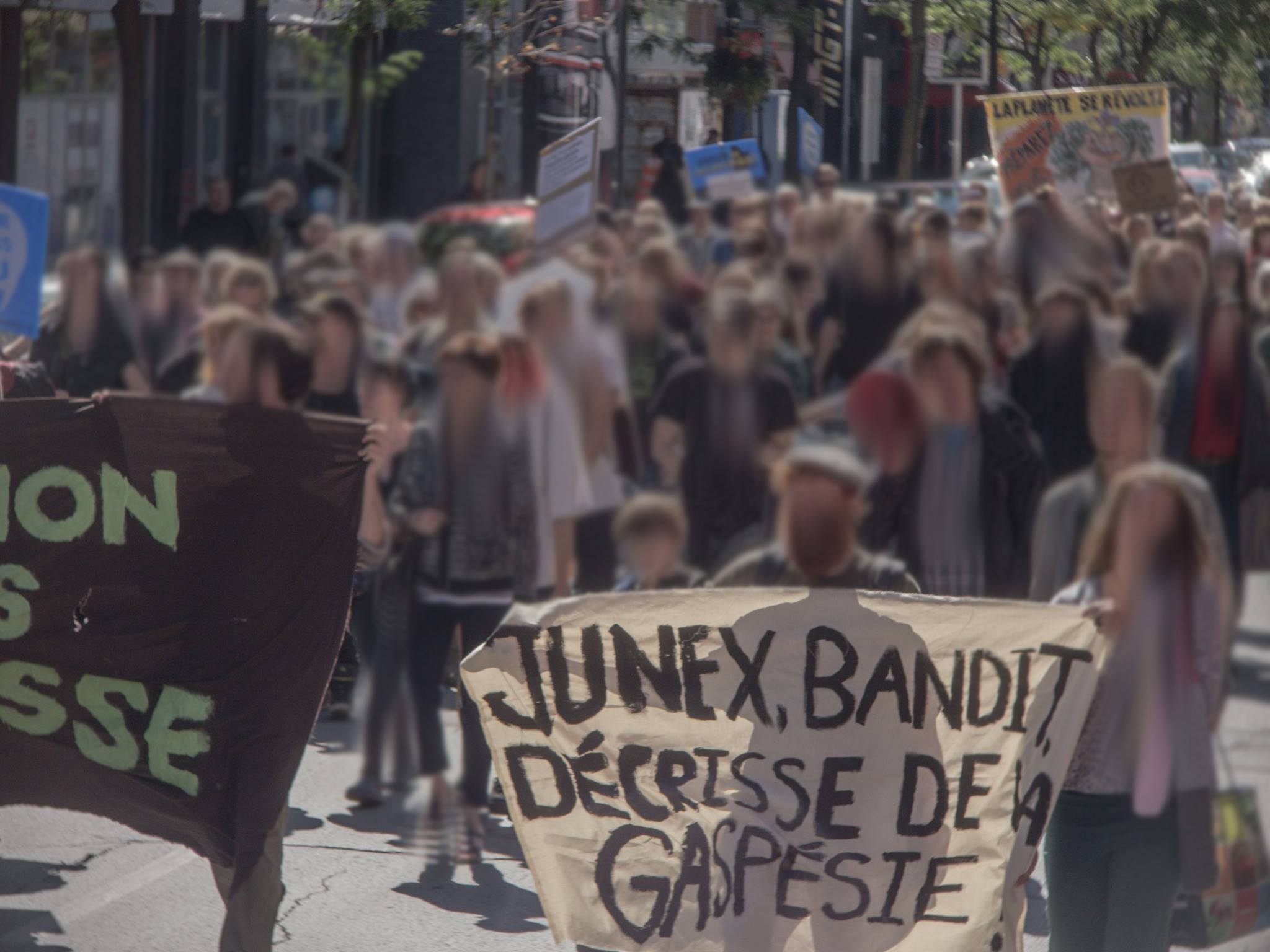 At a critical moment, and to the surprise of the bike cops, the demo veered off St. Antoine and north towards the rail tracks. This part of the demo erupted into a victorious sprint to the tracks where we quickly took the space, set-up the parameters of our blockade, and began serving food. Shortly after, a Via Rail passenger train came into view. This created a lot of concern amongst many people on the tracks–not all trains can stop so quickly. There was a real risk of people getting hit by the train. Freight trains cannot make such stops, taking long distances before coming to a complete stop. The section of rail it would have passed was quickly cleared, but fortunately for us it came to a stop and nobody was injured, and we managed to hold the tracks for over an hour. Police attempts to establish communication with ‘our leaders’ were met with trolling and hostility – police exist to serve and protect the ongoing colonial genocide that ‘Canada’ depends upon. We made the decision to exit the site collectively on our own terms in order to minimize the potential for arrest. Three people face charges for alleged participation in this demonstration. 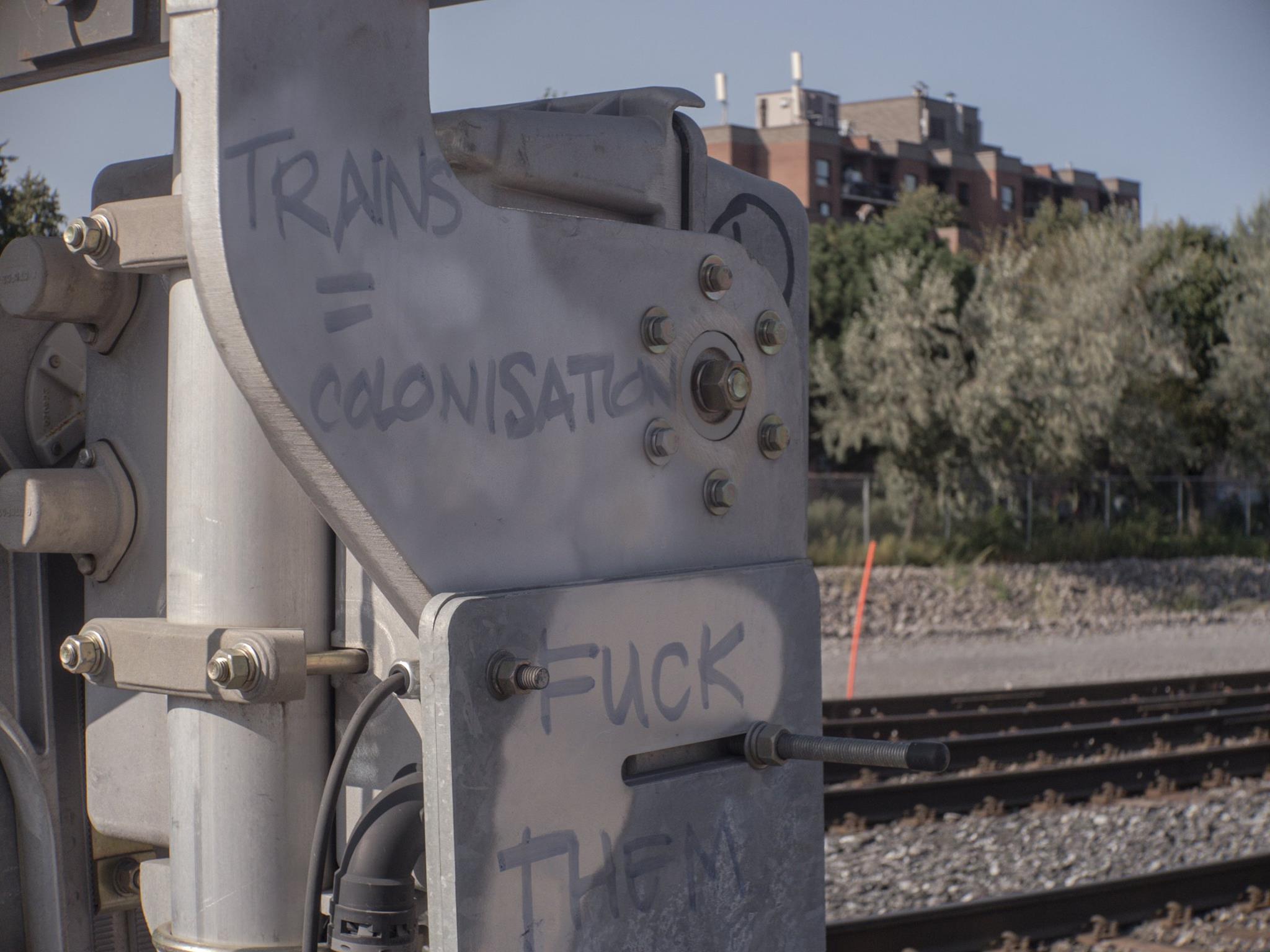 The demo and rail blockade was a victory. We achieved our goals in creative and ad-hoc ways even when faced with moments of adversity. We put our bodies on the line to show solidairty with those confronting and resisting Junex and their fracking project in the Gaspésie region. It’s not enough to sing songs and sign petitions, we must put real pressure on the infrastructures and people that enable the settler state and society to continue its rampage of the land and indigenous bodies. We respect a diversity of tactics: that’s why the demo in general was a success. People showed up at Cabot Square representing a variety of left-leaning ideologies and ideas about activism. This, in turn, enabled other actions to happen within this space. As a result, we walked away with a feeling of how powerful even a small group of committed people can be against the state, the police, and the corporations.

The following text was read aloud before the demonstration took the streets:

This protest is an answer to the Camp by the River’s call for a week of actions against ‘resource’ extraction economy in Gaspesie, mi’kmaq territory. After the occupation of Junex’s office in Quebec, this grassroots protest wants to spread the word about the ongoing struggle. The ‘resource’ extraction economy’s drilling projects are threatening the waters and the forests, declaring war against all forms of life inhabiting the territory. Taking sides for other possible worlds, we are blocking the streets of the metropolis to bring back to the face of this world the territorial conflicts it created by pillaging the resources it requires.

We are marching in solidarity with the mi’kmaq people, whom Junex’s and Petrolia’s oil drilling projects confront again with 500 years of brutal colonialism. We refuse to dissociate the question of territories from the decolonial struggle, because the existence of the Dominion of Canada’s political and economic institutions was born from colonialism. Just as Shunbenacadie’s (so-called Nova-Stotia) Mi’kmaq Treaty Truck House is fighting Alton Gaz’s destructive project, the Camp by the River wants to break down the colonial corporation’s grip on the territory. To do so, we must collide with existing bounds with the territory and the ancestral forms of sovereignty which undermine its exploitation and pillaging. For all those reasons, we support the Mi’kmaq Traditional Council and the Mi’kmaq Warrior Society, who have been relentlessly fighting institutions imposed by the colonizers.

We also support Kahnawake and Kanehsatake warrior struggles, and acknowledge that Ti:otake (the island of Montreal) is their territory, and that it once was, before the settlers arrived, a meeting place for indigenous peoples, Kanienkeha:ka, Anishinaabe, Mi’kmaki and Wyandot.

In our defence of the land and the rivers, we aim towards decolonization and support the ongoing struggles. If we are marching today, it’s because one month ago a group of native and non-natives took action and concretely blocked Junex’s drilling project by building a barricade. The central role of oil in the canadian economy was revealed by the sheer quantity of material and effectives deployed by police to put an end to the barricade. The next week, the swat, supported by a SQ tank, took back the land liberated by the earth and water protectors, arresting one of them, Anishinaabe Freddie Stoneypoint. We are also here to denounce this political repression.

Canadian and Quebec institutions relentlessly promote and support the ‘resource’ extraction economy. This situation demands that we find new ways to organize and think our relationships. We can no longer dialogue with what entirely depends of what is killing the territory.

The solidarity we are building will have to take the offensive. What we are trying to protect and the current situation require serious means. The ‘resource’ extraction economy is vulnerable, since its infrastructures are spread over all the territory. By blocking this economy, we are taking the basic means to live and decolonize Turtle island.

If we want to strengthen solidarities across the territory, we must voice History’s most horrible and concealed truths. That’s why our protest begins at Square Cabot, in Montreal, where the city and the State wished to celebrate so-called explorer John Cabot. This servant of english imperialism was never more than the starting point of the biggest genocide in history, just like Cartier for the French. The existence of this statue is an insult to all the peoples who continue their struggle to liberate themselves from their colonial chains.