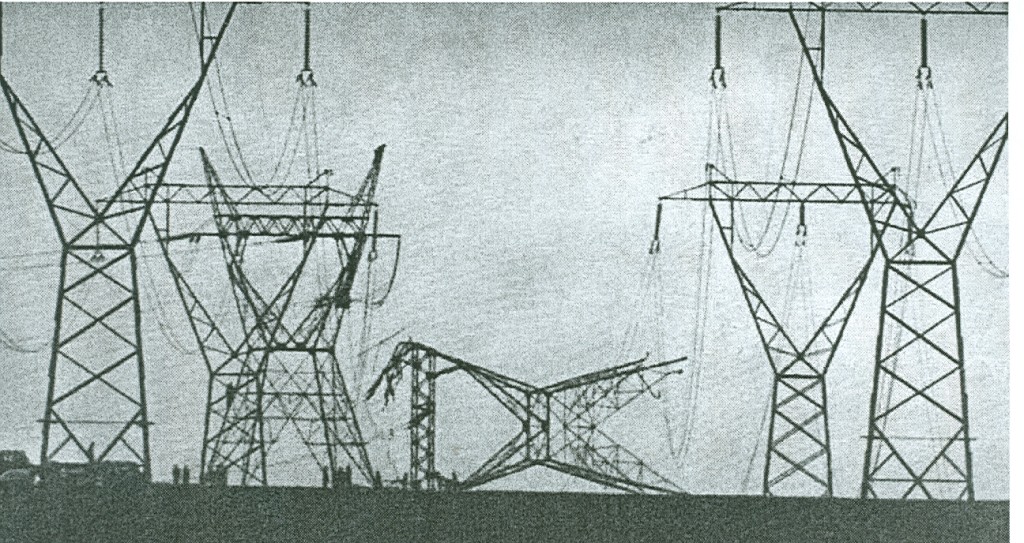 735 000 volts. This is what will pass through the new very high tension line that Hydro-Quebec wants to construct as of this year. The trajectory of this line is 400km long and will transport electricity from the Chamouchouane central to Sanguenay-Lac-Saint-Jean, passing through Lanaudiere, towards an eventual post that does not exist at the moment, in Terrebonne, called Judith-Jasmin. This will be linked to the Montreal region by a second segment of 19 km towards the Bout-de-l’Ile post. This is the most important hydro line in 20 years, estimated at 1,3 billion dollars. In fact, it’s the 12th line of this scale in so-called “Quebec”.

But firstly, they need to clear-cut the path where pylons will be planted. The deforestation has already begun in the north and in Lanaudiere. It has caused multiple expropriations and partially crosses the hunting grounds of Attikamekws in the north, St-Michel-des-Saints, St-Zenon, Ste-Emelie-de-l’Energie, St-Alphonse-de-Rodriguez, Rawdon, etc.

The project has been contested by many residents, farmers and ecologists for the past 6 years: “Useless, environmentally devastating and economically unjustified” (Citizens Under High-Tension). Beyond any doubts, it is a categorical refusal. The BAPE (Bureau of public audiences on the environment) has recommended the government wait until they have more information, to deepen the study of the impact and to take into consideration the opposition of the area. Nonetheless, the State has adopted a decree imposing the pursuit of the construction. Hydro-Quebec gave 4 million dollars in compensation to the Regional County Municipality of Lanaudiere and another one million to Manawan as compensation to make them swallow their salads. But there are still people who oppose; most have land concerns, they are angry property owners because the value of their houses will decrease or because they have farms and their animals can’t handle the strong electromagnetic fields of these high-tension lines. They refuse to sign the letters sent by Hydro-Quebec that requests residents permission to cut trees on their lands as Hydro will not have compensated them personally in cash. In response Hydro is harassing them and has obtained an injunction. Even if it is heartwarming for people to be mobilizing against Hydro-Quebec, this refusal only slows the process of systemic destruction and doesn’t aspire to halt it. We can even say that the motives of this opposition are absolutely contradictory to the desires of wild freedom that live in us. Our desire is to expand the field of possibilities, so we wish to propose other avenues to break the realization of this hydro project. As of this moment, the project is going ahead and the deforestation has already begun.

The Hydro-Quebec mafia has no interest in retreating faced with a project like this that represents enormous profit. In fact, the era of combustible fossil fuels is in decline. Facing the drying up of petroleum resources, the costs of extraction and transportation have become too high. The turn to green has been in the works for a few decades and in this context, hydro-electricity, perceived as a renewable and green energy, becomes a precious commodity. The large global corporations of commerce and finance are in the process of restructuring and transforming the industry and transportation in order to adapt to “green energies”. The new Minister of Transportation of Quebec has for an innovative mission the electrification of public transportation with new hybrid and electrical vehicles. Electrical cars become more and more accessible, Hydro installs battery recharge stations in every corner of so-called “Quebec”, even field vehicles will be electric in the near future. And all this with the objective to maintain the speed and the productivity of the industry. The infrastructure projects of energy transportation, as with roads, railroads, ports, pipelines and airports, are indispensable to the expansion of industry, a tentacular project in itself.

A myth is built around hydro-electricity as a green and renewable energy source. We brag about it almost as if it was the national joy of so-called “Quebec” with its numerous fresh water rivers of high flow. In reality, we should perceive hydro-electricity as an exploitable resource, commodifiable as much as iron, uranium or petroleum. Today, the territory is completely disfigured, there remains only a few high flow rivers that haven’t yet been invaded by dams. The electricity itself that they speak of is actually a gigantic enterprise of ecosystem destruction, of river pollution and the destruction of ways of life of communities that depend on the river for survival. When a dam is constructed, the river is blocked and a reservoir of water that floods a large surface of the territory is created. The river in question overflows from its bed near the dam and dries up along all its length. The trees and plants that have been flooded die and release methane and carbon dioxide into the water and the air. The methane and the carbon dioxide are greenhouse gases; it is reported that 12% of greenhouse gases emitted on the colonized lands of the Canadian State originate from hydro-electric dams. Another consequence of these floods is the methyl-mercury contamination of the water, originating from the release of fossilized inorganic mercury in the soil. Once the ground has been flooded by water, the mercury is released and transforms into methyl-mercury, a neurotoxin that is consequentially found in the food chain. The fish, animals and humans that consume it may develop a variety of illnesses, such as cardiovascular disorders and cancer. It has been accordingly discouraged for people to consume the fish of these rivers for a period of 30 years following the flooding of a basin. To summarize, the plentitude of fresh-water rivers of so-called “Quebec”, in the past potable, have all become toxic. The animals and the humans that depend on them for drinking water and food are poisoning themselves or losing a source of potable water. As a result: thousands year-old ecosystems and ancestral forms of life disturbed and destroyed.

The first intention of Hydro-Quebec is evidently the creation of consumer markets with the United-States, with a pretty discourse singing praise for hydro-electricy as being cleaner than coal electricity. On their website, they make the comparison. What they don’t say, is that its the shitty industry put in place with its logic of monopolization since the beginning of colonization by the Europeans 500 years ago that causes the destruction of life. Hydro-Quebec therefore explores all the american markets and talks of even undertaking other projects of dam construction for the few fresh water rivers still intact. They obviously don’t have any reservations regarding the real damages caused by their thirst for wealth.

The bleeding of electricity

Hydro-Quebec owns approximately 62 hydro-electric centres. Since the beginning of the 2000s, the great rivers of the James Bay area and the North Shore have been used to feed a hydro-electric complex (i.e. the Caniapiscau, the Opinaca, the Eastmain and Ruper), and seriously disrupted following the installation of hydro-electric centers (i.e. Sainte-Marguerite, the Romaine and Toulnustouc). These famous high tension lines transport the electricity coming from the North and supplied to the entire province, its urban centers, its suburbs, its industries and its mines. As an example, supplying a single mine in heating and electricity, to render its below ground environment inhabitable for the people who work in it, is the equivalent energy consumption of a city like Trois-Rivieres. As those who oppose the project say, the province has no need to produce more electricity. In fact, most of the electricity produced is already surplus. At the moment we consume only 15% of the electricity produced, the rest is lost through transportation, or even watered because it isn’t profitable to stockpile it in batteries. Actually, if the produced current isn’t consumed right away, its lost. Therefore, this 735 000 volt line will transport energy coming from the dams in the north: James Bay, Manicouagan, and the new dams of La Romaine on the North-Shore, projects that have faced intense resistance by the inhabitants of the region during the past years. The State accordingly justifies this project by saying the new dams provoke congestion on the existing lines.

Let’s not forget that Hydro-Quebec is a State company that has the monopoly on matters of electrify, that frequently gives contracts to companies with cloudy numbers, that imposes high fees, that expropriates land in exchange for ridiculously low compensation, and who works solely with the goal of favoring the industry. Here, what is important to us goes far beyond the value of houses. There is the annihilation of the environment, a reality erased by all kinds of false publicity of Hydro Quebec. Because in reality, the energy of the industry comes from a carbon thermal center, nuclear reactors or hydroelectricity,the paradigm stays the same: productivity, the pillage of territories and the expansion of the market. No energy dedicated to industry could be clean.

We are fighting to re-appropriate our lives. We have the intention of destroying what destroys nature, because we need it to be well and live healthily. Industry, dams, mines, and deforestation are devastating parasites. It suffices to imagine being a bird flying in the sky contemplating the scenery to realize the devastation that has been initiated is irreversible, to see the holes in the forest, to see the flooded lands in the bassins of the dams. We quickly understand that the ecology is far from being a priority of Hydro Quebec and its shareholders. They pay themselves hunting and fishing trips in resorts for the rich, and appropriate the rest of the lands by buying cottages, they build chains and fences, put up signs that say “private property, access forbidden”. Those responsible for these companies aren’t entitled to forgiveness.

We honour all acts of resistance, we salute the courage of communities struggling for self-determination and wild freedom. We are those who oppose the ravaging deforestation in the forest of Ouareau, with the Cree who are opposed to the clear-cuts in the forest of Broadback, with Six Nations who are also fighting against deforestation in the Red Hill Valley related to the high tension line in the south of so-called “Ontario”, with the Mi’kmaq who are fighting again fracked gas, with the Mohawks who threaten to block the Energy-East pipeline, with those who occupy Lax U’u’la (Lelu island) in blocking the construction of the Pacific Northwest LNG terminal and with all the accomplices with wild and combative spirits.

In this very moment, deforestation of the company of the region has begun, as well as the establishment of access roads. There is still time to stop the construction and it isn’t the State or any representative, even those with good will, who will help us. What are we waiting for? 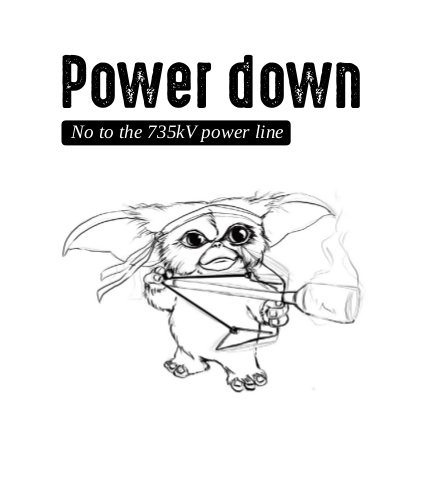