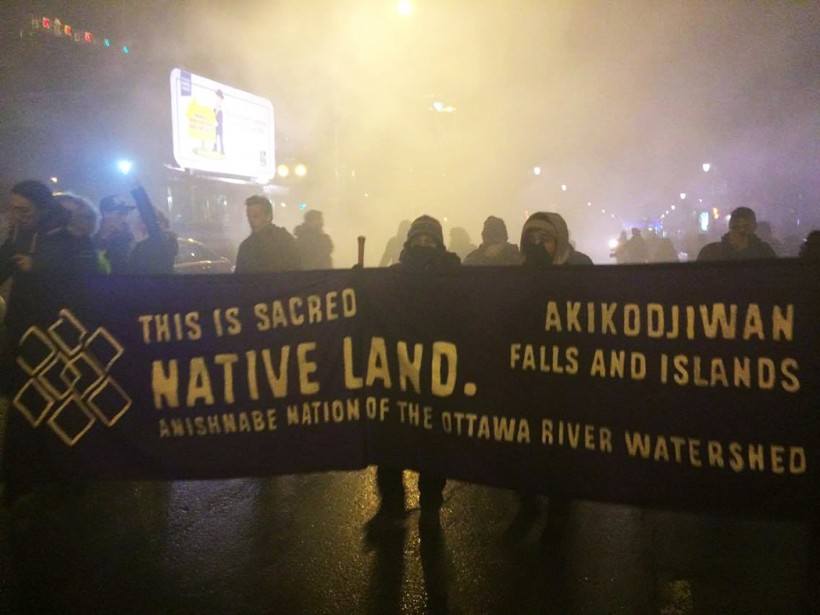 On the night of Monday, April 11, a demonstration in Montreal in response to the second police killing in under two weeks attacked the SPVM. Sandy Tarzan Michel, an Anishinabe man, was murdered by police on the anishnabeg reserve in Lac Simon, Quebec, last Wednesday, April 6. Police shot him several times after running him over with a police cruiser. Sandy’s nineteen year-old brother was also assassinated by police in Lac-Simon in 2009.

After Sandy was murdered, other people who live on the reserve confronted local police and tried to block the entry of provincial police (the Sûreté du Québec) who were called to assist the local force, leading to three arrests. When someone is killed by police in Quebec, a different police agency is called in to “investigate”, and the SPVM has since received the assignment in Lac Simon.

Around 100 people gathered outside St-Laurent metro station and listened to speeches from Anishinabe organizers. As the demo took the street, participants could be seen donning and distributing masks. The demo turned east on Ste-Catherine as bike cops flanked both sides of the march at the point where the most masked people were located. Over the next forty-five minutes as the demo proceeded relatively calmly, people were clearly expressing their grief, sadness, and anger in different ways, with some marching silently and encouraging others to do the same, and others chanting slogans wishing violence upon the police.

At the intersection of Ste-Catherine and de Lorimier, members of the crowd struck the flanking bike cops on each side with rocks, while setting off smoke grenades on the sidewalks that obscured the cops’ visibility. The bike cops quickly fled. With no cops in the immediate vicinity of the demo, a few minutes later, people paint-bombed and smashed the windows of the Ministry of Public Security building on Parthenais. The Ministry of Public Security oversees the provincial prisons in Quebec (which are disproportionately populated by Indigenous people) and the Sûreté du Québec – both institutions that maintain colonial occupation in so-called “Quebec”. The riot police charged the demo quickly thereafter, and succeeded in dispersing the demo despite some attempts to fight them off with volleys of rocks. No arrests were made.

As anarchists, we initiated attacks in this space because we’re not struggling for less murderous police, but for the destruction of all forms of policing. When the police kill someone, sexually assault someone, imprison someone, we believe in vengeance, but we don’t want to stop there. By opening up space and time in the streets through attacking the police, people create the conditions to destroy other components of the material infrastructure of colonial society. We believe this is an important step to nurture the relations of care, trust, and reciprocity that are essential to any rupture with the colonial, capitalist, and patriarchal control of life. In the particular setting of this demo, we acted to open the possibility of complicity with Indigenous people who see the inherently colonial institutions of Canadian policing, in their entirety, as enemies. While aware that some Anishinabe participants were calling for a peaceful protest, we hope that others recognized us as possible future accomplices.

After Monday night, we’ve noticed some self-proclaimed settler/white allies reacting harshly to the direct actions that took place against institutions they ostensibly oppose. The way in which they have taken one or two individuals’ call for a peaceful march to represent the interests of a whole community speaks to the failure of allyship politics. The idea of being a good ally by following the instructions of an oppressed group inevitably confronts the problem of contradictions amongst people of the identity category in question. In so-called Canada, there is no shortage of combative anti-colonial resistance to take inspiration from; whether it be from the people who confronted police on the anishnabeg reserve last Wednesday, the struggles against ecological devastation in Elsipogtog and Lelu Island, the fight from the barricades over two decades ago during the ‘Oka Crisis’, or the continual war against colonialism that has been fought on many fronts since settlement began.

There are a multiplicity of ways that people are fighting the systems that harm them and their environment. While some Anishinabe and other Indigenous people want the institutions that dominate them to be violently confronted, others place hopes in the channels that these institutions present to them as means of change, such as symbolic protest. Would-be ‘allies’ need to reckon with this reality, and find our own paths in fighting domination instead of following a representative out of guilt and moralism.

We want to foster relationships of complicity, rather than allyship, with all those who struggle against systemic violence. Fuck the police, fuck quebec, fuck canada.