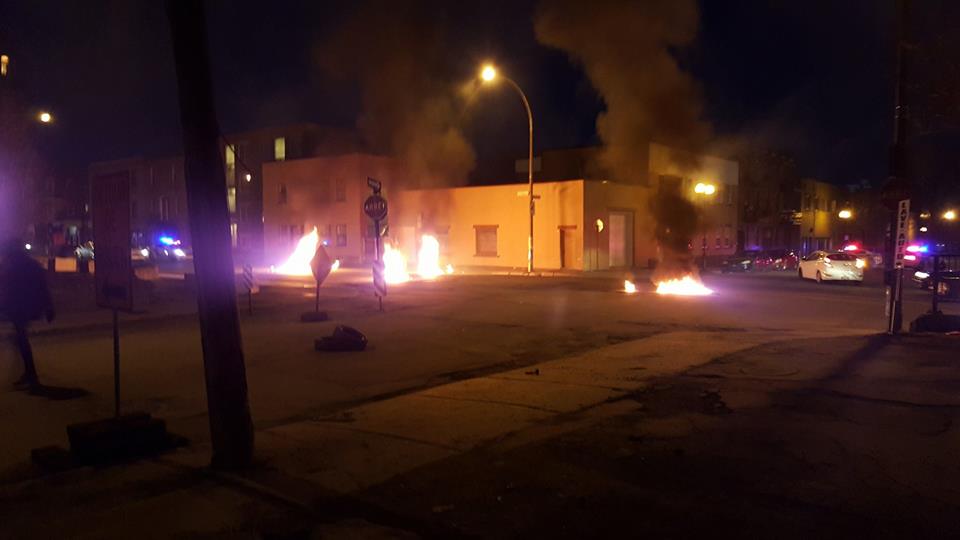 After having participated in what was called as a demo against the police in Hochelaga on Thursday April 14th, we had the urge to share some reflections outside of our living rooms (towards yours perhaps?).

First off, we were fucking excited to see a flyer circulate that was calling for a neighborhood demo in Hochelag’. We want to be able to participate in moments of struggle in the neighborhood and not only downtown and/or in demos called on Facebook.

We can clearly point out that the demo felt more like an action than a demo, because only around thirty people answered the call. Could it still have been a demo even if it was called in this way? Probably not. It seems difficult to subtly circulate flyers, less than a week in advance, and have a hundred people show up. But we don’t feel like people should have called it an action either, in which case we would have the impression that the invitation can’t be public (for safety reasons) and that there would be a clear objective, that people must follow. So we fall into the trinity cul-de-sac typical of Montreal; demo/action/demo-action. We don’t feel like what happened was a demo, and we don’t want it to be called an action either. We propose employing another term for this kind of offensive march: a ‘balade’ (roughly translates to stroll). It maintains the spirit of a march, which can be wandering, and we would add a connotation of combativity – no matter the form that this offensiveness could take. And the invitation could be made publicly, and people would know that there is space in the balade for them to take their own initiatives. The balade is open like the demo, offensive like an action.

This moment was called as a demo and the offensiveness wasn’t specified, so the situation lacked transparency for people who came and participated – this is dangerous for everyone. The vagueness of the call-out meant that some of the people who showed up weren’t adequately prepared for this kind of moment. It would have been worth mentioning in the flyer that people should come ready to participate in a black bloc, or to wear clothing to disguise their identity. This would have then allowed people to expect to participate in a combative demonstration. Although we understand that people don’t want to necessarily reveal the details of what they have in mind when they send out an invitation, we nonetheless believe that people should have a minimum of information to decide if they want to participate, and if that’s the case, to prepare themselves mentally and physically. It’s a matter of security and confidence, and these are essential in the long-term for our capacity to hold this type of offensive position.

Also, the starting point of the demonstration was highly problematic. Around thirty masked-up people in a park is going to freak out the neighbours, and this is how we found ourselves with two cop cars on our backs even before anything had really began. In the future, we need to find places that are more subtle to assemble or else the same scenario will repeat itself. Consequentially, because the cops showed up from the get-go, the people who had more information to share weren’t able to – or only in a highly rushed and even shouted manner as we attempted to get onto Darling street to go up to Ontario. Having a better starting point would have probably resolved, to a certain extent, the lack of transparency of the flyer.

Props to the gang, after all, because we knew to stick together from the moment when the cops showed up. We have the strong impression that if everyone dispersed from the beginning there would have been arrests. The fact that we decided to continue together, to trust each other, and to follow the instructions to the exit point clearly saved a good number of us from being arrested.

Props to everyone who charged at the cops to de-arrest that person who got snatched by police.

Props to everyone for the ferocity and the violent tenacity that allowed us to hold the cop cars at a distance while the condo real estate company Royal Lepage was attacked and while people found the way to escape a potential police trap.

Props for having attacked the fucking cops who permit this colonial, patriarchal, and capitalist world to exist against us.

Props for a balade in Hochelag. In hoping that we find all kinds of strategies to continue the offensive.

See you in the next black bloc!