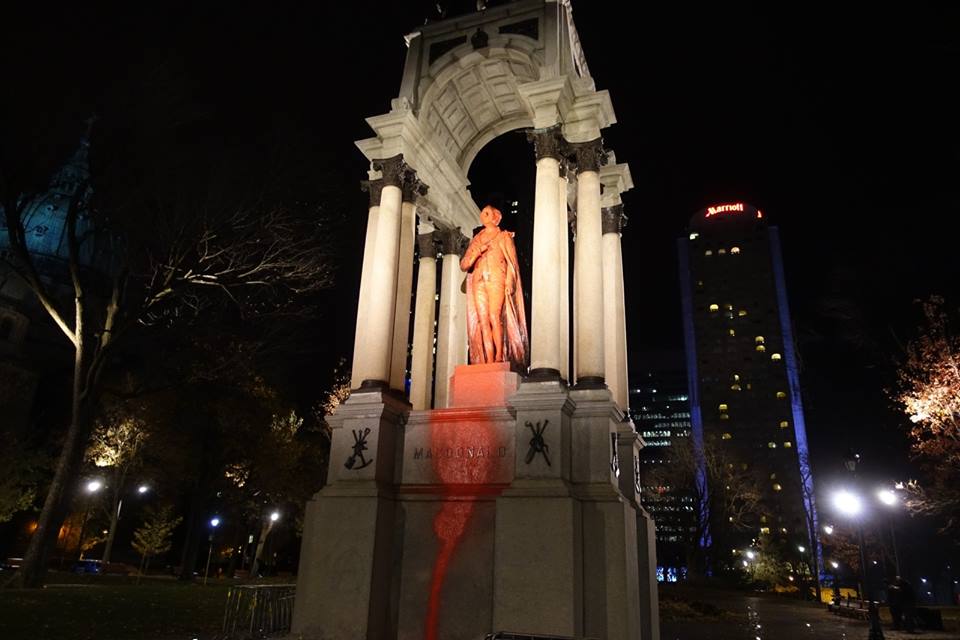 From the Anti-Racist Resistance Collective of Montreal (CRAM)

(The Anti-Racist Resistance Collective of Montreal (CRAM) anonymously received a link to the following video earlier this morning: https://vimeo.com/242431388 … The video includes a link to the callout below. We are sharing this info with the public, but we are not responsible for this action.)

MONTREAL, November 12, 2017 — On the eve of an important demonstration against hate and racism in Montreal, a group of anonymous local anti-colonial, anti-racist, anti-capitalist activists have successfully defaced the historical monument to Canada’s first Prime Minister, John A. Macdonald, located in downtown at Place du Canada.

According to Art Public Montreal: “Among the monuments erected to the memory of Macdonald, the one in Montréal is the most imposing and elaborate.” The monument, built in 1895, is also now covered in red paint.

– A video of the action is available here (posted anonymously online on vimeo):

– Photos of the defaced monument are available here:
http://i64.tinypic.com/63ubfa.jpg
http://i68.tinypic.com/2jdffac.jpg

– A photo of the original monument is available here:
https://tinyurl.com/yctxbyuk

The individuals responsible for this action are not affiliated with today’s anti-racist demonstration (www.manif12novembre.com) but have decided to target the John A. Macdonald statue as a clear symbol of colonialism, racism and white supremacy.

The action today is inspired in part by movements in the USA to target public symbols of white supremacy for removal, such as Confederate statues. It’s also motivated by decolonial protests, like the “Rhodes Must Fall” movement in South Africa. As well, we are directly inspired by protests by anti-colonial activists – both Indigenous and non-Indigenous – against John. A. Macdonald, particularly in Kingston, Ontario, Macdonald’s hometown. We also note efforts elsewhere in the Canadian state to rename the schools named after Macdonald, including a resolution by the Elementary Teachers’ Federation of Ontario who denounced Macdonald as the ‘architect of genocide against Indigenous people.’ The defacing of the Macdonald Monument is also appropriate in the context of the whitewashing of Canadian history this year during the “Canada 150” celebrations, and various calls to action, including the ‘375+150 = Bullshit’ graffiti action this summer.

With all that inspiring and amazing anti-colonial and anti-racist activity targeting statues and other symbols, we decided to make a little contribution from Montreal.

John A. Macdonald was a white supremacist. He directly contributed to the genocide of Indigenous peoples with the creation of the brutal residential schools system, as well as other measures meant to destroy native cultures and traditions. He was racist and hostile towards non-white minority groups in Canada, openly promoting the preservation of a so-called “Aryan” Canada. He passed laws to exclude people of Chinese origin. He was responsible for the hanging of Métis martyr Louis Riel. Macdonald’s statue belongs in a museum, not as a monument taking up public space in Montreal.

Videos, photos and text of this action have been shared anonymously with some Montreal-area anti-racists, to distribute more widely, and to inspire more on-the-street anti-colonial actions locally.

We also express our heartfelt support and solidarity with the protesters taking today’s streets in Montreal in opposition to hate and racism, as well as the upcoming anti-fascist mobilization to confront the racist, Islamophobic and anti-immigrant La Meute and Storm Alliance in Quebec City on September 25.