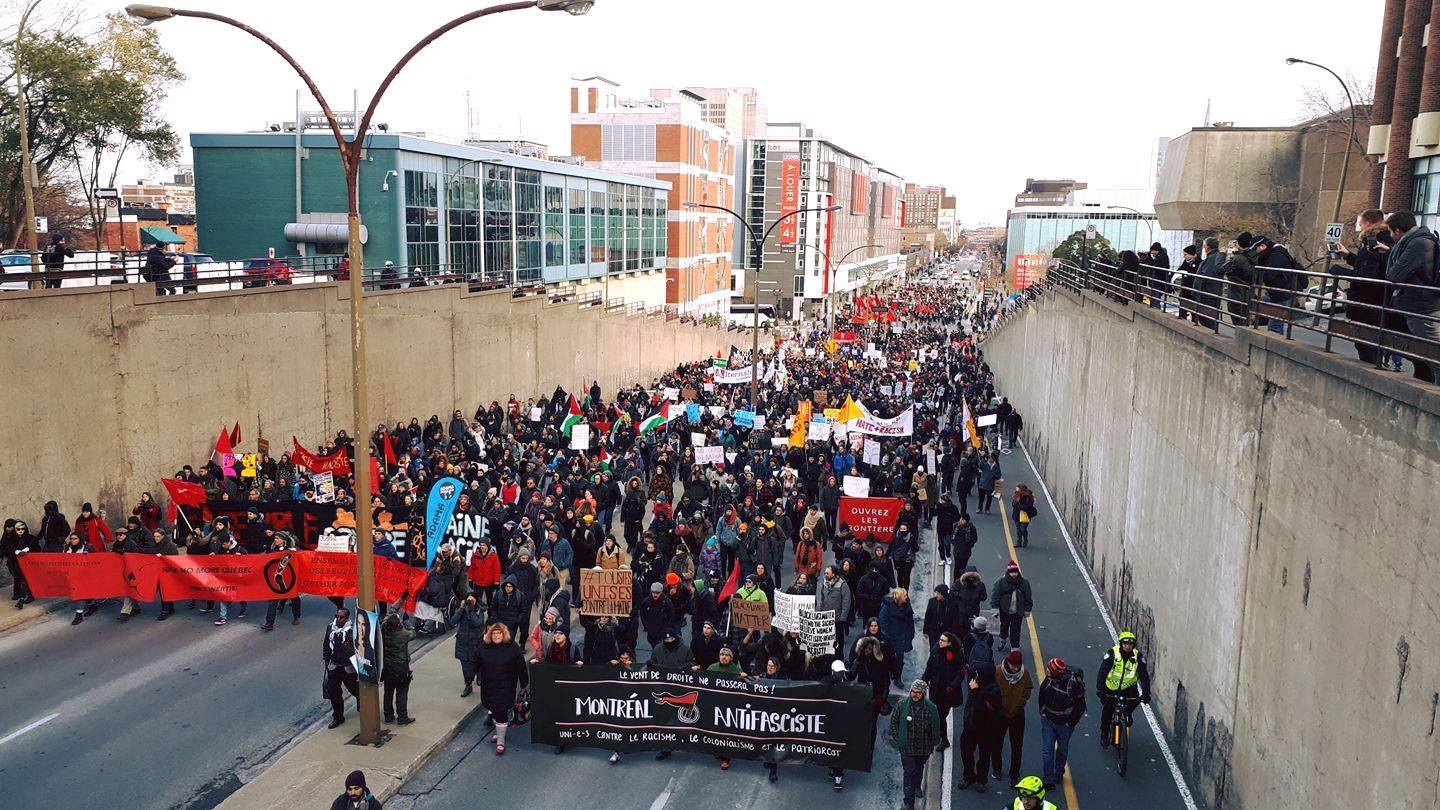 On November 12th, 2017 a demonstration of about 5,000 people snaked through Montreal under the banner “large demonstration against hate and racism”. This was a good show of force, and tactically an important step on the part of the organizers in a context where far-right groups have been able to match or out-mobilize anti-racists at times in recent months. The demonstration was clearly organized under a left coalition type of model, and as a result, suffered from some rather questionable populist language in their mobilizing call-out. Some of us were a bit concerned about a possible drift towards the de-contextualizing and delegitimizing of the concept of “hatred” which could likely come around to bite anarchists and other radicals in the ass in the future.

Some of us came to participate in the demonstration with critical solidarity, what follows is the text we handed out to participants in the demo and passers-by:

(some will recognize that the bulk of it is taken from Against the Logic of Submission, by Wolfi Lanstreicher)

Many of the people at this demo are incensed by the whole drift towards fascism and other forms of authoritarianism in the current political climate. However, there is a constant tension to be consistent with one’s own values and ethics, for the sake of practicality, and especially in times of mass anxiety. With that in mind, as anarchists, we offer a critical take on the discourse of being “against hate”.

Having made the decision to refuse to simply live as this society demands, to submit to the existence it imposes on us, we have put ourselves into a position of being in permanent conflict with the social order. This conflict will manifest in many different situations, evoking the intense passions of the strong-willed. Just as we demand of our loves and our friendships a fullness and intensity that this society seeks to suppress, we want to bring all of ourselves to our conflicts as well, particularly our conflict with this society aimed at its destruction, so that we struggle with all the strength necessary to accomplishing our aim. It is in this light, as anarchists, that we would best understand the place of hatred.

The present social order seeks to rationalize everything. It finds passion dangerous and destructive since such intensity of feeling is, after all, opposed to the cold logic of power and profit. There is no place in this society for passionate reason or the reasonable focusing of passion. When the efficient functioning of the machine is the highest social value, both passion and living, human reason are detrimental to society. Cold rationality based on a mechanistic view of reality is necessary for upholding such a value.

In this light, the campaigns against “hate” promoted not only by every progressive and reformist, but also by the institutions of power which are the basis of the social inequalities (not referring to “equality of rights” which is a legal abstraction, but to the concrete differences in access to that which is necessary in order to determine the conditions of one’s life) that incorporate bigotry into the very structure of this society, make sense on several levels. By focusing the attempts to battle bigotry onto the passions of individuals, the structures of domination blind many well-meaning people to the bigotry that has been built into the institutions of this society, that is a necessary aspect of its method of exploitation. Thus, the method for fighting bigotry takes a two-fold path: trying to change the hearts of racist, sexist and homophobic individuals and promoting legislation against an undesirable passion. Not only is the necessity for a revolution to destroy a social order founded on institutional bigotry and structural inequality forgotten; the state and the various institutions through which it exercises power are strengthened so that they can suppress “hate”. Furthermore, though bigotry in a rationalized form is useful to the efficient functioning of the social machine, an individual passion of too much intensity, even when funneled into the channels of bigotry, presents a threat to the efficient functioning of the social order. It is unpredictable, a potential point for the breakdown of control. Thus, it must necessarily be suppressed and only permitted to express itself in the channels that have been carefully constructed by the rulers of this society. But one of the aspects of this emphasis on “hate” — an individual passion — rather than on institutional inequalities that is most useful to the state is that it permits those in power — and their media lapdogs — to equate the irrational and bigoted hatred of white supremacists and gay-bashers with the reasonable hatred that the exploited who have risen in revolt feel for the masters of this society and their lackeys. Thus, the suppression of hatred serves the interest of social control and upholds the institutions of power and, hence, the institutional inequality necessary to its functioning.

Those of us who desire the destruction of power, the end of exploitation and domination, cannot let ourselves succumb to the rationalizations of the progressives, which only serve the interests of the rulers of the present. Having chosen to refuse our exploitation and domination, to take our lives as our own in struggle against the miserable reality that has been imposed on us, we inevitably confront an array of individuals, institutions and structures that stand in our way, actively opposing us — the state, capital, the rulers of this order and their loyal guard dogs, the various systems and institutions of control and exploitation. These are our enemies and it is only reasonable that we would hate them. It is the hatred of the slave for the master — or, more accurately, the hatred of the escaped slave for the laws, the cops, the “good citizens”, the courts and the institutions that seek to hunt her down and return him to the master. And as with the passions of our loves and friendships, this passionate hatred is also to be cultivated and made our own, its energy focused and directed into the development of our projects of revolt and destruction.

Desiring to be the creators of our own lives and relations, to live in a world in which all that imprisons our desires and suppresses our dreams has disappeared, we have an immense task before us: the destruction of the present social order. Hatred of the enemy — of the ruling order and all who willfully uphold it — is a tempestuous passion that can provide an energy for this task that we would do well to embrace. Anarchist insurrectionaries have a way of viewing life and a revolutionary project through which to focus this energy, so as to aim it with intelligence and strength. The logic of submission demands the suppression of all passions and their channeling into sentimentalized consumerism or rationalized ideologies of bigotry. The intelligence of revolt embraces all passions, finding in them not only mighty weapons for the battle against this order, but also the wonder and joy of a life lived to the full.

Whether you call yourself an anarchist or not, to cling to this ruthless political system at a time when, in most peoples’ eyes, it’s legitimacy is in severe decline is to put the ball completely in the court of reactionaries like Trump, La Meute and Storm Alliance or alternatively, progressives like Trudeau, Zuckerberg, and the NDP. The open and outright white-nationalists and the liberal progressives are simply two sides of the same coin, based in the same progression of the same western civilization. Hence the same discourse around law, order, civility and rights.

While the right takes the mistakes of the anti-globalization movement and turns it into a racist “rebellion” against neoliberalism, towards economic nationalism, we must begin to articulate our own rebellion against this society. A rebellion that takes this as the battle of life against death that it is, one that acknowledges a complete break with the present order as the only realistic solution to our problems. Not only must we organize for self-defense against racists, and respond to the attacks of the powerful against the poor and marginalized. But we must also organize to create our own power and resources for ourselves, build relationships that chip away at whiteness and patriarchy, and launch attacks against the institutions of white-supremacist, colonial, Canadian society.

For a healthy hatred of white-supremacy, capitalism, authority and all social hierarchies!

Not our website, but good for staying aware of local anarchist initiatives: mtlcounter-info.org