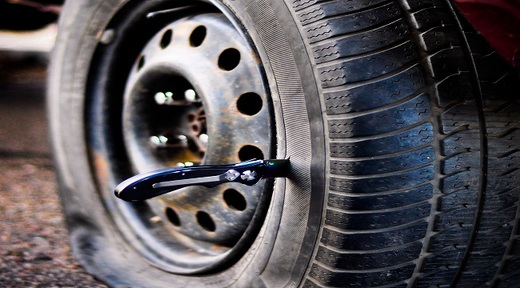 On March 15, 2017, a dozen or so condo owners in Saint-Henri dug their cars out from under the biggest snowfall of the winter, only to learn that their tires had been slashed while they slept.

We carried out this simple action on the eve of the 20th annual Protest Against Police Brutality, in Hochelaga, to emphasize that the struggle against policing and the struggle against gentrification are one and the same: the creation of a world hostile to social control and all forms of domination.

It required minimal planning and could have been done at any of dozens of locations in the neigbourhood.

Through acting, we reflected on tactical choices in the targeting of individual (if random) yuppies and rich people in the context of anti-gentrification activity. Damaging luxury cars is often named as a desirable way of doing so. It was apparent that a bit under half the cars in the condo parking lots we visited were of luxury brands. We slashed tires of all the cars. Many yuppies decide to display their wealth by other means than a BMW or Mercedes. Regardless of their consumer choices, it’s worthwhile to make them feel unsafe in the neighbourhood by damaging their property. And targeting all condo owners’ or yuppies’ vehicles may make it harder for the cops to catch people in the act, as they will attempt to do if the practice continues to spread, and harder for owners to secure their vehicles, in indoor parking for instance. However, it may be warranted to focus on luxury cars for forms of vandalism that are more visible to passersby than slashed tires, in the interest of actions being intelligible to neighbors and people on the street.