A couple hundred people gathered yesterday evening at Place Valois in Hochelaga for the 20th annual edition of the Demonstration Against Police Brutality, organized by the Collective Opposed to Police Brutality (COBP). It was the day after the largest snowstorm of the year in Montreal, and the mounds of snow lining the streets meant obstacles for both demonstrators and the cops. Refusing the protest framework demanding less brutal police, we carried with us the memory of March fifteenths past and their legacy of anti-police revolt. Also, rocks.

The words of a report-back from the last March 15 in Hochelaga seven years ago still ring true:

“We went to that demonstration intending to attack the police. Apart from all the weapons we brought, we carried with us a desire to no longer see a single cop walk the streets the next day; at least without a limp, a headache and a feeling of fear that no overtime pay could reconcile. We went out into the streets to hit them as if we could actually smack them the fuck out of our lives, with no guilt, remorse or shame about it. While acknowledging that we have yet to realize the depth of our desires (cops aren’t yet running for their lives), we can still move our lives and projects in that direction.”
– Measuring the Meaning of a March, in March, in Montreal 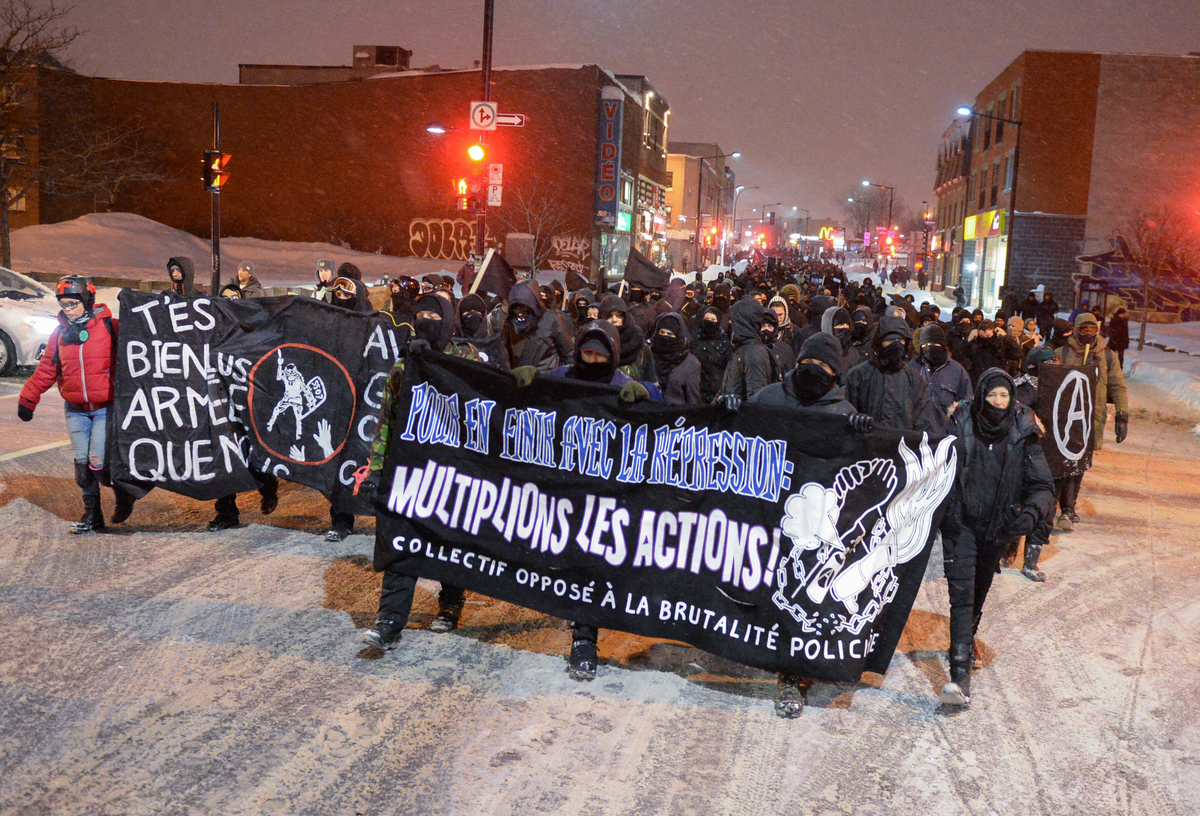 After a speech by the COBP, the crowd set off west down Ontario Street, about a third of which was masked. A dozen black flags and a couple reinforced banners could be seen near the front of the demo, in addition to a leading COBP banner. There were no police marching alongside the demo, as they kept out of projectile range from all directions, and were likely also dissuaded by snow conditions. While some police followed along parallel streets, apparently at least some of the riot squad had to take the metro, possibly due to the storm disrupting their original transport plans. Some rocks were distributed and additional projectiles sought along Ontario, though without much success, as everything was covered in snow. We rapidly and uneventfully crossed Centre-Sud and reached the eastern edge of the downtown core, a firework set off above us to announce our arrival in comfortable and well-known terrain. Individuals in the bloc asked the front banner to slow down several times; it felt like the demo was running after itself, with no good reason to be. This made it very difficult for people running late to join, or the demo to stay tight. We would like to see future demos slow down, or even stop, when there isn’t an immediate threat from police – allowing more smashing, graffing, wheatpasting, barricading, dancing! 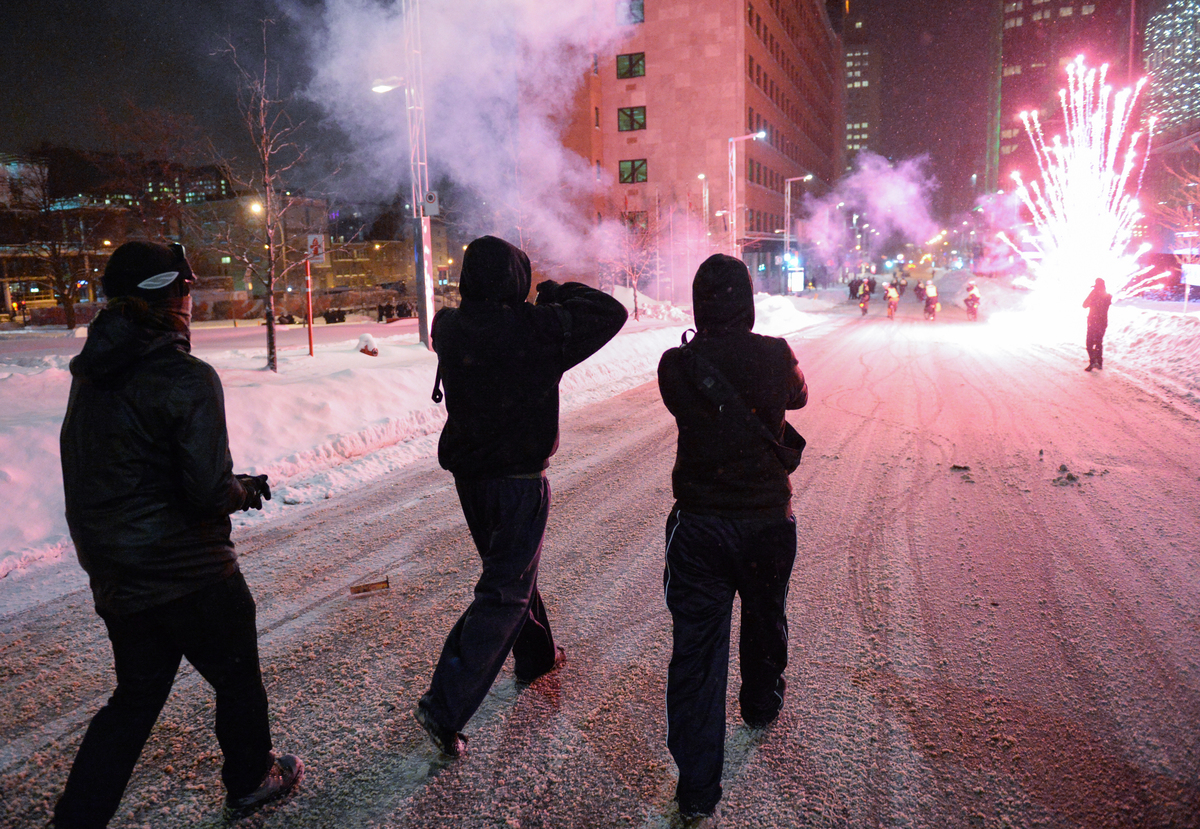 Approaching the area around the Montreal police (SPVM) headquarters on Saint-Urbain Street, police in cruisers and on bikes ahead of the demo were attacked with mortar fireworks. As the crowd amassed around the intersection of Ontario and Saint-Urbain, more fireworks were shot at the police mobilizing to defend their headquarters, then at half a dozen police on horseback approaching from the east. “Get those animals off those horses” almost came true as the horses bucked in fear, causing the horse squad to call it quits for the night.

Rather than congregate at the police headquarters and allow the cops to move in, we continued west on Maisonneuve. A few blocks later, more fireworks were shot at cops ahead of us. A photographer tracking and filming a member of the bloc from a close distance had his camera knocked from his hand, prompting a more general confrontation with media at the front of the march. Rocks and snowballs were thrown at a mainstream media cameraperson, who was then charged with a reinforced banner and knocked to the ground, while his hired goon was beaten with flagpoles from behind the banner. 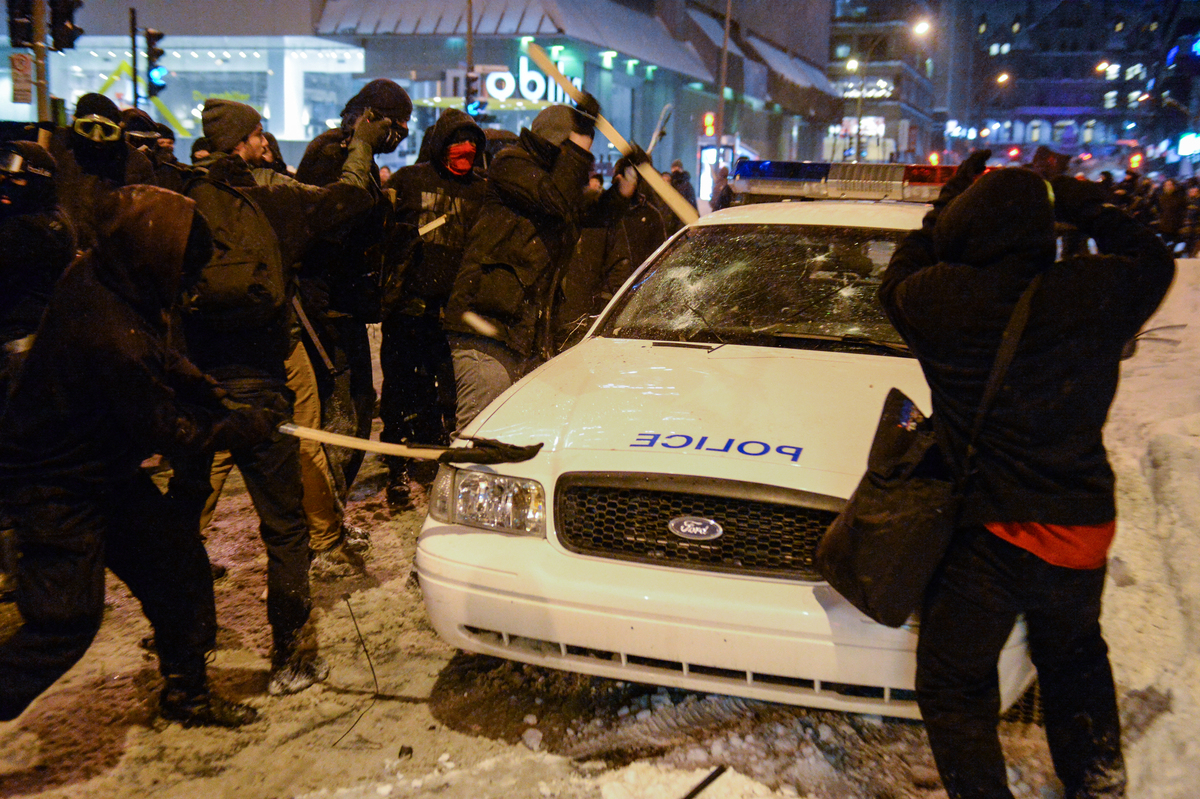 A lone police cruiser was spotted to our left, parked on Union Street. A crowd quickly swarmed and thoroughly smashed it. On the same block, heading south now, display windows of the Bay department store (one of the oldest colonial businesses of Canada) were smashed and tagged with graffiti. After about fifteen minutes of a determined energy translating into conflictual action amongst the hundred-and-fifty-strong crowd, the cops executed an effective dispersal and kettling maneuver. Riot police lines ran up both sides of the demo, while bike cops chased and closed off exits from behind. Many dispersed on side streets ahead of the cops, but a few dozen people were fed east on Sainte-Catherine into a trap at Place-des-Arts, as more riot cops emerged from Saint-Urbain and blocked off the only remaining exit route.

This never should have been allowed to happen; our strength is on small streets that give police less mobility, so of course they funneled us towards the most open space downtown. Turning west on St. Catherine against traffic, and offensively attacking the vulnerable bike police who succeeded in intimidating us towards Place-des-Arts, would have at least allowed for a better dispersal.

Instead, hearts sank as the cops quickly tightened the kettle of thirty people against a side of a Place-des-arts building. But with shouts of “On fonce!” (“Let’s push!”) and an inspiring confidence and swiftness, before secondary cop lines could form, those kettled pushed against the riot cops blocking the sidewalk from the east and broke free. More riot police tried to block off the new exit routes, but there weren’t enough of them, as people raced through snow banks and snow-covered parking lots, for the most part getting away. Unfortunately, around ten people reportedly ended up in a new kettle that formed in the parking lot outside the SPVM headquarters. They had backpacks seized and were presumably photographed, but were let go without any tickets or charges. The demo ended with no arrests.

For combatting the police’s inevitable dispersal strategy, with some planning ahead, a reinforced banner crew could have moved to one of the sidewalks to block or at least delay flanking police lines from getting in position (perhaps accompanied by fire-extinguishers that could be discharged to slow their advance). Throwing projectiles at the flanking cop lines has proven ineffective, as most of the crowd is moving too quickly to fight in cohesive units, making it difficult to throw enough rocks to have an impact on police movements. Let’s also bring the lesson into the future that mortar fireworks were somewhat successful in keeping police at a distance, especially in a terrain where more conventional projectiles were hard to scavenge.

In recent years, the prospect that the black bloc could take time and space away from the police on March 15th has felt remote, so yesterday was definitely inspiring. On one of the two days of the year (the other being May Day) that police prepare for year-round, we were still able to significantly evade police controls, and get conflictual with confidence. This speaks to how we should prepare for demos throughout the year with more confidence in what could be possible. It’s clear that we can bring conflict to the streets in a way that doesn’t signal the end of the demo, as we’ve come to expect, but rather the start of something.

We’re also left with some strategic questions in relation to demos that we’d appreciate a conversation around. When the police are intentionally and constantly keeping their distance from the demo, when and how should attempts be made to seek out confrontation with them? What other goals do we have in such situations? How can we use the space and time we have in these moments to better prepare for the eventual police attack?

LET’S NOT GIVE THE POLICE EVIDENCE!

A note to the independent journalists of the city: it can be hard to distinguish you from mass-media, who generate incriminating evidence that they readily hand over to police (and who we are going to attack at every chance we get). Distinguish yourself by your behaviour – only film from a distance, and don’t film the attackers themselves, only the attackers’ targets. Despite whatever good intentions you likely have, if you film people doing crime, it can and will be used to solidify evidence against them (even when wearing a mask, other clothing items or facial features are regularly used by police to identify suspects). You don’t wanna be that guy that actively endangers demonstrators by exposing them to police violence, so please take this seriously.

Two more things: never film at the starting point or in the first fifteen minutes of a demo, to allow everyone who plans to wear a mask to have an opportunity to put it on safely. And before publishing videos, always blur the bodies of people who are masked. Check out this tutorial if you’re not sure how.

We’re encouraged that Document Everything’s coverage of the demonstration uses all of these techniques; individuals in the bloc are blurred, and the targets of actions are filmed rather than the people attacking them. During the swarming of the police car, the screen cuts to black and we only hear the sounds of destruction. 99% Media’s coverage also blurred individuals smashing the cruiser, but we’d like to critique that they released High-Definition close-up footage of unblurred masked individuals shooting fireworks at cops – no-one’s bloc attire is perfect, and footage like this can put people in a jail cell.

Unfortunately, Document Everything, subMedia, and a few other independent journalists who are clearly on our side were attacked by the bloc – we’d like to see people in the bloc be less indiscriminate towards anyone with a camera. Let’s paint and smash the cameras of any mass media without hesitation, but let’s also take the time to explain to independent media what practices endanger us. Conversely, Maxime Deland (whose incriminating photos were later published by TVA Nouvelles, and who seems to be the mass media’s go-to photographer for confrontational demonstrations) went unnoticed within the bloc because he looked like independent media – here’s his face for next time.

AGAINST POLICE, NOT THEIR BRUTALITY

We’re thrilled that this year the COBP decided to stop using the failed strategy of denouncing the most egregious behavior of the police, and instead called for decentralized direct actions against them, while expressing inspiration by several attacks on police and surveillance over the last year. The COBP explicitly supported the conflict with the police in their communique the day after the demo:

“We applaud all the autonomous groups that mobilized for March 15th, and that get organized all year long to build a balance of power against the SPVM and all police forces…”

“…We witnessed a proactive March 15, with diversified, offensive, and effective actions.”

“We salute the way in which militants fight the police state, and this despite the violence of its response.”

We’d like to see this taken one step further by next year’s demo being called as against police, period. This year the itinerary was chosen based on the locations of past police murders, and a symbolic acknowledgment of the struggle against gentrification in Hochelaga. Walking through the residential streets of Centre-Sud for a half hour to meet this symbolic goal of starting in Hochelaga didn’t feel worthwhile to us. We think for future years it makes more sense to prioritize routes that give us fighting advantages, because revolt is the best form of memory.