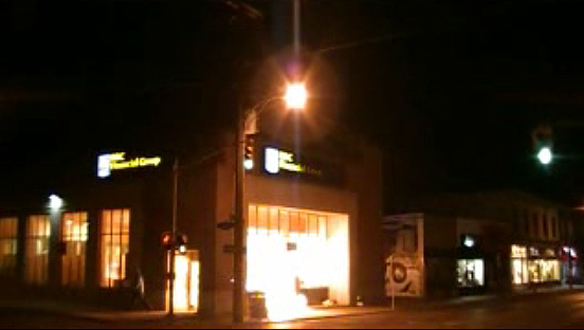 From Stones and Sticks and Words

May 18 is an important day for me. On May 18 the FFFC[1. Don’t ask me what FFFC stands for, because I don’t know.] firebombed a Royal Bank of Canada branch in a wealthy ottawa neighbourhood. One month later, on June 18, I was arrested, along with Roger Clement and one other person.

It was alleged that I had thrown the firebomb that started the fire at the RBC, and I was charged with three counts of arson to property. The charges were ultimately dropped due to a lack of evidence against me.

Roger plead guilty and was sentenced to four years for his role in the arson of the RBC and his role in a previous action against a different RBC branch.

The third person was never charged with any crime related to the arson or any attack on any RBC.

I think that the timing of the arrests was picked to coincide with the opening of the The People’s Summit, which was part of the anti-globalization protests happening in Toronto. The police and whoever else was part of the decision-making process that resulted in our arrest that day wanted the news cycle to be full of stories about the arrest, rather than about The People’s Summit.

Nothing I write here is an admission of guilt to any so-called crime.

I’m not an advocate of non-violence, but i support “forms of resistance which maximize respect for life and oppressed peoples’ rights[2. The quote is part of the 4th Peoples’ Global Action Hallmark]”. I’m not an advocate of non-violence, but like any right-thinking person I believe that violence should only be used as a last resort. Arson of property is not violence, as violence is only and exclusively directed towards living beings: humans, animals and plants. Arson is a non-violent option open to reasonable people who want governments and corporations to stop killing people, animals and the planet. 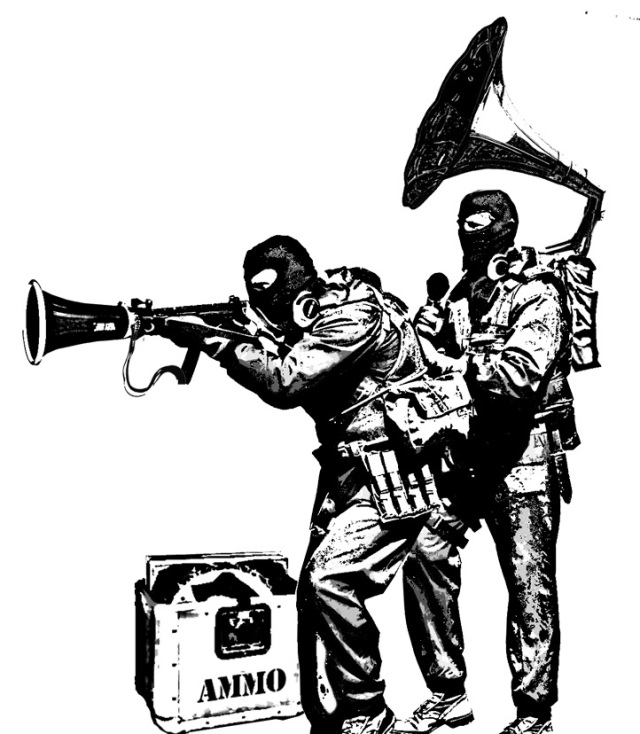 3. Building capacity and skills for resistance

Fighting the capitalist and colonial state and economic system with the goal of winning for now and forever will require learning how to break the law and get away with it. Arson, and any type of highly illegal direct action, requires that activists learn to avoid surveillance, police scrutiny, political repression, etc.

In planning and doing these actions activists will learn the skills they need in order to do them effectively and successfully, in ways that contribute to specific campaigns, and help to build movements for social justice. For example, it is essential to find a secure method for publicizing illegal actions, and a secure method to talk about them given the context of police surveillance.

4. Using up State and corporate resources

This is good for 2 reasons:

a) It forces “our” governments to spend resources targeting us rather than targeting resistance abroad. We want them to be worrying about “their” population, not helping to plunder the people of Afghanistan, Iraq, etc.

b) We want them to react to us, and we want to hurt their bottom line, both through militant direct action, and their reactions to our actions.

Arson and other militant direct action provide an opportunity to dialogue and debate about strategies for system change, as well as about the specific action in question. Proponents can reach out to people who aren’t certain about the necessity, utility and/or desirability of an action, and/or of militant direct action, and ought to listen carefully to their concerns.

It is also an opportunity to identify individuals and organizations opposed to militant direct action.

Finally it is also a good time to criticize those who are opposed to the use of militant direct action.

It is key to remember that dialogue, debate and even criticism is not about being self-righteous, dogmatic or rigid – remember that people’s opinions change over time, and give them the time to change their opinions.

Economic disruption is a tried and true method for causing corporations and governments to change their behaviour.