With the rise of Donald Trump’s malignant right wing troll army and the extension of Toronto’s tentacles into every cavern of our cities, the anti-pipeline movement in Southern Ontario has been spread a little thin this year. We’ve pulled off a couple work-stoppages, some night-time sabotage, and made our best effort at storming the closed-door meetings of the NEB, but on the whole we’ve lacked a coordinated strategy. But we felt it appropriate that on the eve of 2017 and at the tail end of Enbridge’s Line 10 pipeline expansion plan, we deliver one more message to the shareholders, architects and cheerleaders of this cross-continent calamity.

In the wee hours of December 13th, a crew of 30 activists and land defenders crashed the central staging grounds of the Line 10 construction crew. Working on some hard-won intel, we were able to blockade the driveway of S/A Energy before they dispatched their workers to the few remaining construction sites along Line 10. While the company scrambled to figure out what was happening, we quickly built a fire, turned on our sound system, and made contact with workers to let them know we were giving them the day off and that non-work vehicles would be allowed to eventually leave.

They weren’t universally pleased with this pronouncement and we were soon forced to face down the grills of moving trucks. Complications arose when we learned that Enbridge had prematurely laid off several of the workers and we had to figure out strategies that would allow those folks to get home without being tricked into letting workers sneak out. We tried to stay sympathetic to their situation, though the consistent misogyny and transphobia were tough to stomach. We were quick to remind them that our battle is not with the working class grunts of this project, but with the sociopathic slimeballs who orchestrate these atrocities. 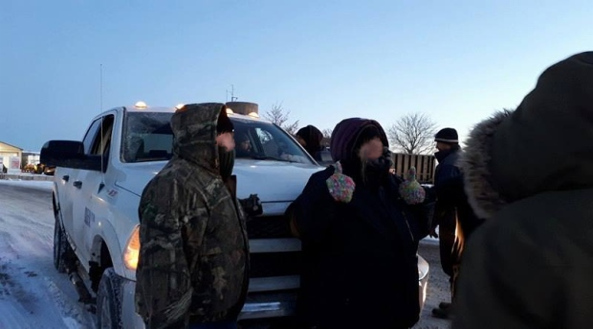 Enbridge’s plan for line 10 is to replace 35 kilometers of pipeline running between Hamilton and Binbrook. The line is 55 years old and has been the source of many “smaller” leaks in the area, each of which wreak irreversible damage on the surrounding ecosystem. Enbridge of course has no concern for the watershed or communities around the pipeline, and wants only to increase profits and so they are nearly doubling the diameter of the pipeline in order to accommodate more oil. The expansion of this pipeline means an increase in Tar Sands extraction. It’s important to remember that even when pipelines aren’t actively spilling, the oil trudging through them poisoned millions of gallons of water an hour in its production. The Line 10 project is part of Enbridge’s larger pipeline expansion plan which (as predicted) has been rubber-stamped by Canada’s farcical National Energy Board. The only meaningful accommodations that Enbridge has been forced to make have nothing to do with conservation of life or land, but rather preserving the integrity of two upper class golf courses which Enbridge has agreed to build around so as not to disturb any games this summer. These are the values reflected by Canada’s only environmental oversight on this project – protect wealth at all costs, disregard anything that stands in the way.

Enbridge’s pipelines have been sites of Indigenous resistance across Turtle Island, and Line 10 has been spared no opposition. Earlier this year, Haudenosaunee land defender Todd Williams effectively stopped work on the pipeline for 3 months. Although Enbridge has informed Indigenous communities about the project, they haven’t actually been given consent – luckily for them the “consultation process” with First Nations has recently been decided in the Supreme Court to not include the necessity of consent. Essentially, telling Indigenous people about the plan is good enough, no need to wait for an answer. As we have learned in so many other battles there is no legal option for resisting this project, no reason to ask for permission – taking direct action to shut down pipelines is the only avenue of solidarity left.

Our occupation of S/A Energy’s headquarters lasted from about 6am until 2pm. Spirits stayed high throughout the day as we warmed our toes by the fire, showed off some slick dance moves, and enjoyed a hot homecooked taco buffet out of the back of a pickup truck. We were kept on our toes by the perpetual shenanigans of the police and S/A managers who were desperate to see the work day continue as planned. One of the most dramatic moments came when a line of S/A work trucks attempted to make a back-door escape across a snowy field and over a roadside ditch. Though one truck made it out, some fast moving bloackaders were able to head-off the second truck, and watched as it oafishly rolled back into the ditch. A loud crack let us know that the axle of the truck wasn’t happy, and the spinning of the tires let us know that the truck wouldn’t be moving anywhere without a tow. We laughed and celebrated the thought of S/A sabotaging their own work trucks in such a cunning plot.

Throughout the day we negotiated the gradual exit of off-duty workers, but managed to successfully prevent any work from happening. At one point we were confronted by an irate and dramatic landowner who was leasing his property to S/A – we held our ground and advised that he consider leasing his lot to people who are not actively destroying the land on which we all live. Yes, we are all just trying to make a living, but for those capitalists who are invested in the exploitation of the land and those who live on it, don’t be surprised when people try to get in your way. The time has past for “I’m just doing my job” to fly in the face of injustice.