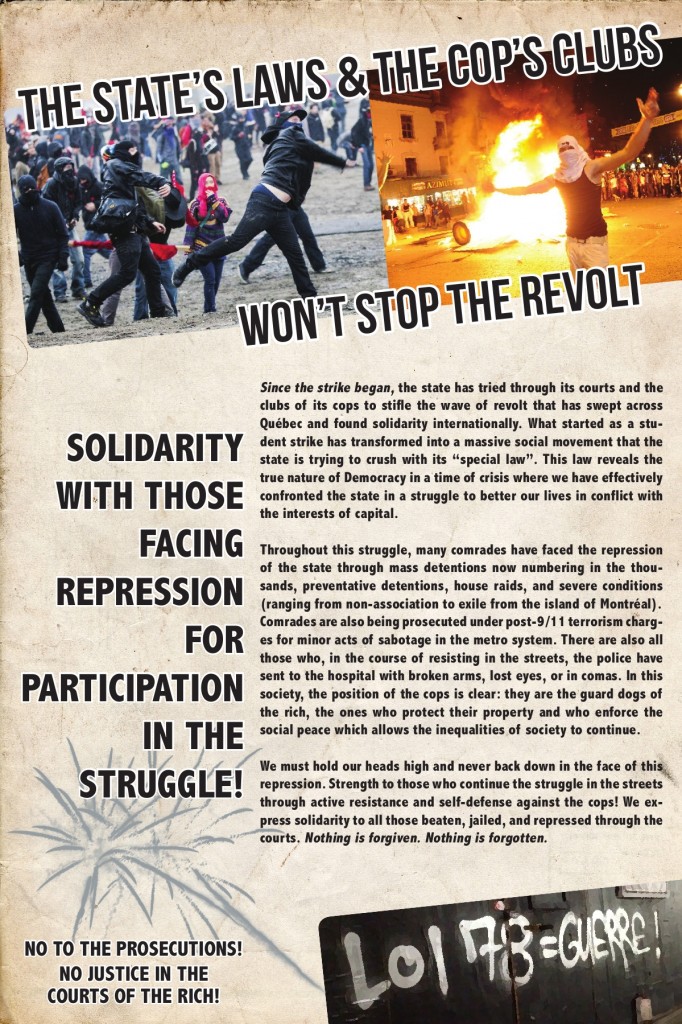 SOLIDARITY WITH THOSE FACING REPRESSION FOR PARTICIPATION IN THE STRUGGLE!

Since the strike began, the state has tried through its courts and the clubs of its cops to stifle the wave of revolt that has swept across Québec and found solidarity internationally. What started as a student strike has transformed into a massive social movement that the state is trying to crush with its “special law”. This law reveals the true nature of Democracy in a time of crisis where we have effectively confronted the state in a struggle to better our lives in conflict with the interests of capital.

Throughout this struggle, many comrades have faced the repression of the state through mass detentions now numbering in the thousands, preventative detentions, house raids, and severe conditions (ranging from non-association to exile from the island of Montréal).

Comrades are also being prosecuted under post-9/11 terrorism charges for minor acts of sabotage in the metro system. There are also all those who, in the course of resisting in the streets, the police have sent to the hospital with broken arms, lost eyes, or in comas. In this society, the position of the cops is clear: they are the guard dogs of the rich, the ones who protect their property and who enforce the social peace which allows the inequalities of society to continue.

We must hold our heads high and never back down in the face of this repression. Strength to those who continue the struggle in the streets through active resistance and self-defense against the cops! We express solidarity to all those beaten, jailed, and repressed through the courts. Nothing is forgiven. Nothing is forgotten.

NO TO THE PROSECUTIONS!

NO JUSTICE IN THE COURTS OF THE RICH!

Copies in print available at La Belle Epoque and L’insoumise