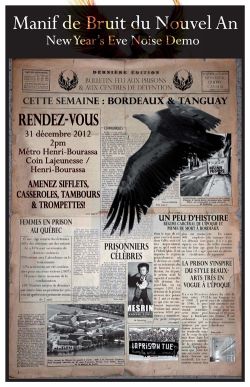 On December 31, 2012, New Year’s Eve, there will be a demonstration heading to the prisons, Tanguay and Bordeaux, in the north part of the island of Montreal, near metro Henri-Bourassa. Carrying on a tradition from around the world, we will go wish a happy new year to those who are being held behind bars.

Prisons were created to isolate people from their communities. Noise demonstrations at prisons are a material way to fight against repression and isolation. Noise demos permit the creation of links between prisoners and people on the outside, who can together share their opposition to the bars, the guards and the world that needs them.

In the last few years, the student strike and the G20 brought some of us a bit closer to this reality. During the strike, some of our friends spent time behind the walls of the Tanguay Prison for Women and the Riviere-des-Praries Prison for Men before being released with extreme conditions including curfews, non-association and exile to wait for their trial. In the wake of the G20, friends who were charged with conspiracy, mischief, etc, also spent many months in prison. We know there are more trials coming.

In the last few years, the government has been busy expanding the prison system. They are currently spending an estimated $4 million dollars constructing 22 new prisons and expanding many existing prisons across the country. The project adds up to about 9,500 new beds for prisoners. In the same vein, new laws are being passed, like C-10 and C-38. Bill C-10′s overall goal is to to put more people in prison for longer and Bill C-31 ensures mandatory detention, loss of the right to apply for permanent residency for at least 5 years and loss of the right to sponsor one’s family for refugees who are charged with “crossing the border irregularly”. It’s never been a better time to go yell at the walls of a prison.

Because no one is free until we are all free. Inside as well as out, let’s revolt!