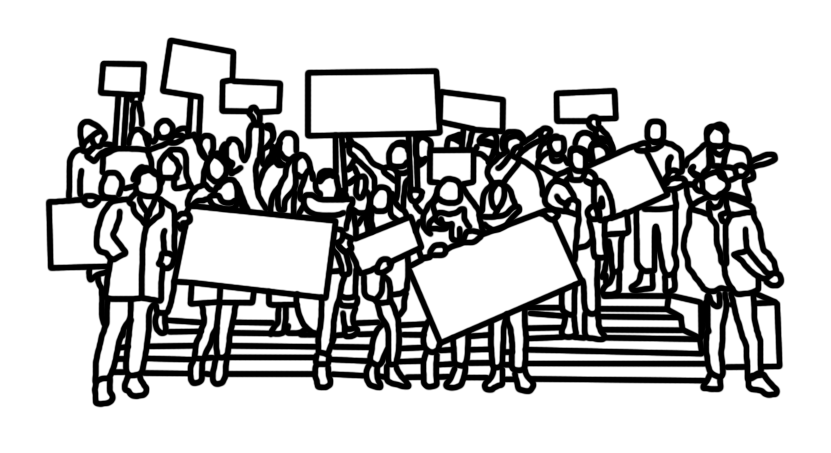 The election period brings its own complications for those who wish to directly take part in a campaign like the one for paid internships and for the recognition of studies as a job. For many months now, interventions have burst forth from all sides, intentional or not, to hijack, divert or neutralize the organizational ability of interns in struggle, towards partisan or corporatist ends. These initiatives, in combination with manoeuvres by the government, come from partisan committees rather than national student associations.

The first example – At the end of March, the Minister of Finance brought down the provincial budget, in which $15 million per year has been announced, earmarked for a financial compensation package during the final internship in teaching. After years of cutbacks in public services[1], no one is fooled: It is indeed an electoral budget in which gifts are being distributed. Financial compensation for final teaching internships has been demanded for more than a dozen years by local and national associations, whose involvement has gone up and down without seeming to lead to any concrete gains. Why has the government decided to move now? The strike! A little more than a year of sustained struggle for the payment of all internships and a serious threat of a stoppage of classes and internships in many programs and many regions was sufficient to make those in power see the need to act. While pressing the demands of CRAIES[2], and completely aware that the most combative elements in the struggle could be found in large part within the education programs, the measures announced serve, no more no less, to divide the movement and cut off it’s ability to organize. It must be said that the strike days are starting to accumulate and administrations like the one at UQAM are showing some openness to paid internships in every program. The Minister of Higher Education herself has publicly announced, following a high profile action by CUTE UQAM, within the framework of the Summit on higher education, that a major project to explore the possibility of paid internships in many programs would be put in place. In short, if the weakening of the movement seems real following the budget, it is however a knife that cuts both ways: this concession also indicates that the days of the stoppage gave concrete results and it is foreseeable that an unlimited general strike could lead to all interns receiving a salary. It is however necessary to avoid dividing the movement and give the government other escape routes of the same sort.

This is what brings us to the second example. Following this “victory” half-heartedly demanded by CRAIES and UEQ[3], it was tempting to want to reproduce this recipe. That is the idea held by the Quebec Association of Student Midwives (AESFQ), who have undertaken to imitate the campaign of CRAIES, in an accelerated fashion, within an electoral context, thinking that in this way they can obtain payment for their internships. Thus begins the speeches and photos with politicians, like Gabriel Nadeau-Dubois and Jean-François Lisée, press conferences at the National Assembly, memes on social media, all of it only to demand paid final internships for midwife practice. The FAECUM[4] is of the same opinion. It encourages the executive of the Social Services Student Association at the Université de Montréal (AESSUM), where the struggle for the payment of all internships is well rooted, to organize a campaign for their discipline only, while sharing with them their worries about seeing this association participate in the strike movement. However, such corporatist concessions would have resulted in weakening the movement as a whole even more and to make all campaigns by program or field of study stagnate. The movement for the payment of all internships has helped reinvigorate the campaigns for the payment of the final teaching internships and for the payment of internships in the study of midwifery, by linking them to a general movement that is rooted in the recognition of the interns’ work and, more broadly, of the work of women, both at the local level and on a global scale. The last thing that is needed right now is to split the movement into specific struggles.

The third and last example. During last winter and spring, activists of Québec Solidaire (QS) from almost everywhere, took it upon themselves to circulate a petition around campuses in favour of paid internships that are mandatory for receiving a diploma. That is notably the case of the QS Campus Association at the Université de Montréal and the QS Sympathizers Group at the Université de Sherbrooke. Rather than being destined to be tabled in the National Assembly, this petition is part and parcel of the new QS strategy that permits the organization to collect voters’ data in view of involving them in the electoral campaign[5]. Rather than use the pre-election period to invite students to mobilize for paid internships on the campuses, they divert this struggle towards recruitment and to promote voting for a party. But the equation that “a vote for QS = a vote for paid internships” is misleading. Firstly, because the campus committees of QS are not involved in the struggle for paid internships and don’t participate in the activities and meetings in the educational institutions nor within the regional coalitions for paid internships, though everyone is welcome. However it is above all because, even if the position of QS indicates that the party is in favour of the payment of all stages, its electoral programme is itself not specific about the theme of the payment of the final stage in teaching[6]. It would therefore be better advised for QS activists on the campuses to rally around the movement and organize the strike rather than to re-route the movement from the street towards the ballot box; a strategy that has never been proven effective.

Minister David has put in place a round table with the national student associations to extinguish the fires that we have lit. It is important now to respond in a judicious way. It doesn’t matter which party will take power, we will organize the strike and we will lead it until the end. Let us not be distracted by the elections. That is the watchword that the groups and associations united within the Montreal and Outaouais coalitions have given themselves, for paid internships.It is only in this way that the government will give in.