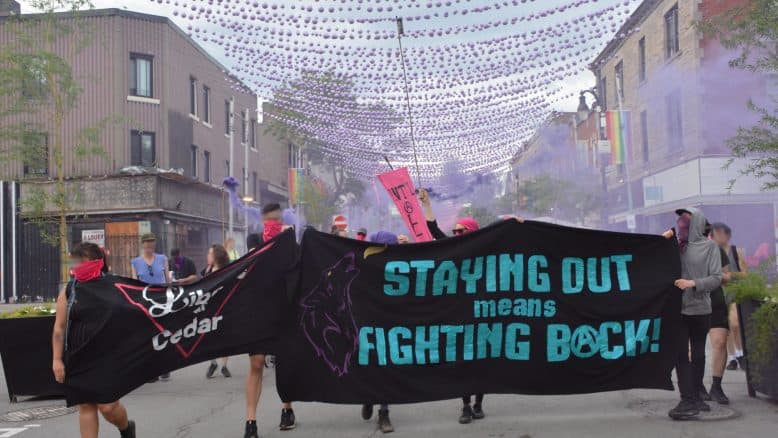 SPEECH given at the SOLIDARITY WITH CEDAR & DROP ALL CHARGES AGAINST PRIDE DEFENDERS demo, MONTREAL, July 28th.

Thank you so much for coming – everyone – beautiful queers and trans people, anarchists of all stripes, anti-fascists – allies. It is going to be an amazing night of sending our love and solidarity to our friends in Hamilton and Cedar in prison. To start out with we have a just a few things to say…

We come together today, on the ancestral territory of Anishnabeg and Haudonousanee peoples, more specifically the unceded land of the Kanien’kehà:ka Nation, in order to protest and show our queer and trans rage following the events of the last week. It is important to be stated that the colonial mechanism that stole this land in the first place, allowing so called Montreal to be built, also targeted the cultural terrain of sexuality and gender for hundreds of years. While many of our identities are so different, the concepts and notions of gay or queer or trans that non-indigenous people use are constructed in reaction to, and from white Christian colonial and capitalist culture. The very fabric and fibre of these words, while clearly imperfect, is not new, and pays hommage to the people whose bodies were born into conflict with the heterocolonial project. We recognise that numerous indigenous cultures respected more than two sexualities and genders, celebrating their two-spirited community members. For five hundred years the colonial project of the State has attacked these people, trying to extinguish or assimilate them. But indigenous land sovereignty is inseparable from sovereignty over bodies, sexuality and gender self-expression. We honor the fighters who have struggled long and hard to restore sexual diversity and gender fluidity back into their cultures and we recognize our queer struggle as being intertwined with an anti-colonial struggle as well.

On June 15th, 2019 in Hamilton, “Ontario”, Pride was attacked by a group of far-right homophobes, christian fundamentalists, neo-nazis, and queer bashers. As they did in 2018, they arrived with massive homophobic signs and banners, and immediately began to scream insults and slurs. They aggressively harassed individuals, made jokes about rape, and threatened physical violence. Things quickly escalated as the bigots violently confronted people who were holding a fabric barrier in an attempt to block them from disrupting Pride. Initiated by the far-right activists a brawl broke out – queers who refused to allow their presence to go unchallenged were attacked, but fought back. Several friends were injured and required medical attention. The police did nothing during this hour-long conflict, and only stepped in at the end when there was nothing left to do. The haters knew they couldn’t sustain their presence any longer, and welcomed the police escort out of the park. After being kicked out of Pride, this same group chased and assaulted queer youth in the neighbourhood, and then went on to attack people at Toronto Pride the following week.

Since these events, the Hamilton Police have felt quite threatened – communities that feel empowered to use force to defend themselves undermine their unquestionable authority. Over the course of the last week, the police have consequently been targeting and harassing known queer anarchists in the city as punishment for folks standing up for themselves. Our dear friend Cedar (who wasn’t even present at the event!) was arrested on Saturday, and was on hunger strike for five days. They will stay in jail until a lengthy probation hearing, a vengeful and punitive measure carried out by the police because Cedar publicly criticized the police’s actions. Later this week, two other queer friends have been arrested and charged with probation breaches based on suspicion of being present at Pride. Not a single homophobe was charged all week, despite the widespread circulation of their names, faces and videos of their violent actions, until public pressure finally forced the police to charge Christopher Vanderweide with assault with a weapon. We oppose the colonial prison system, but the repression the police directed to those they suspect as Pride defenders first is once again truly revealing of their age-old position and purpose: protecting racists, misogynists, and homophobes.

Queer might involve our sexuality or our gender, but to us it means soo much more. It’s a territory of tension that we must defend. We stand in solidarity with Cedar and those accused in connection with this event, as well as any queers held in prison for bashing back. As queers and trans people, we know that our existence has been fought for bravely by those who have come before us, not only against homophobes and neo-nazis but also against the police. Queer militancy has a long lineage. We remember, 50 years today, the Stonewall Rebellion, on June 28 1969, as a four-day anti-police riot led by Black and Latina drag queens, kings, and transsexuals, like Marsha P. Johnson et Sylvia Rivera, in New York’s Greenwich Village. It went on to become a rebellion that was both gay and trans, for in the words of Queen Allyson Ann Allante, a fourteen year old participant at the time, “because it was the first time that both came together to fight off the oppressor and it set a good precedent to do it many times since. It was a big milestone for both communities because they were both in unity to fight the common oppressor, which at that time was the police and the mafia, who controlled the gay clubs.” While remembering the flying bricks and high heels exploding from gay trans anger, we can’t forget that the gay liberation movement that blossomed systemically tried to silence and marginalize the participation of trans women of color, trying to centre attention on a white gay respectable narrative. We see this tendancy 50 years later and we know that our communities still have internalized and externalized transmisogyny and racism to work on, and we see the imperativeness of fighting common enemies like the police or the far-right, shoulder to shoulder. We remember police attacks here in Montreal, stemming back to the attack in Truxx Bar when 143 party goers were arrested and charged for indecency in 1977. We remember also Sex Garage in 1990, when the SPVM descended on 400 gay club goers, violently beating them with their batons and the ensuing 36 hour fight. We know that queer and trans homeless youth and sex workers still face police repression constantly on the streets – the only reason that the Gay village of Montreal is now this far East of downtown is that in the lead-up to both Expo ’67 and the 1976 Summer Olympics, the SPVM carried forth a brutal criminalization campaign on the city’s queers – beating up and arresting many people as well as closing down bars. We know that worldwide queer people, especially those who are racialized, are disproportionately attacked, criminalized, incarcerated and even murdered. American transphobic hate crimes have tripled in the last five years and we see a similar trend here – our work is so far from being over! Yesterday the 11th American trans person to be murdered this year was found in Kansas City – Brooklyn Lindsey, yet another black transwoman trying to live her life. We remember Sisi Thibert, who in September 2017, was stabbed in Pointe St. Charles, Montreal. This sadness and pain stays with us always. Our existence will continue to be threatened unless together, we fiercely defend ourselves, our friends, as well as the spaces we create. But marginalized people are doing that on the daily. The far-right group that mobilized in Hamilton is not too different from far-right groups that have been fought against in Quebec. Queers are coming together, like in Hamilton and countless times before, to hold, feed, listen to, and fight for each other. We know that we need to make ruins of domination in all of its varied and interlacing forms and that none are free until all are free. Fighting back is always legitimate. We are going to dance and take up space tonight, be beautiful and revolting together, as a way to blend our queer love and queer rage for the fucked up attacks on our friends in Hamilton and the police’s consequential repression. We know that we are strong together – let’s fucking show it. We are here tonight to say :