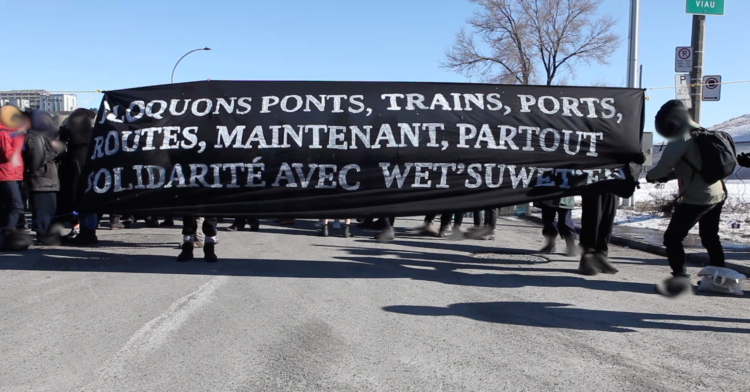 A group of around 100 protesters blocked the Viau entrance of the Port of Montreal Saturday afternoon for about 30 minutes. The group arrived at the port at around 2:15pm today and erected a barricade and several banners in front of the port entrance, blocking incoming and outgoing traffic. The group then held a demo through the streets of Hochelaga-Maisonneuve.

This action took place in solidarity with the Wet’suwet’en who are fighting against the continued occupation of their unceded territories by Coastal GasLink (“CGL”) and the RCMP. This action comes on the heels of multiple rail blockades which have taken place in so-called Montreal in recent weeks.

We are here to show our solidarity with Indigenous people all over “Canada” who have been blocking ports, government offices, roads, and railways to create economic disruption and force an end to the occupation of Wet’suwet’en land.

On March 2nd, the Gidimt’en checkpoint published a video calling for continued solidarity actions, asking allies everywhere to keep the pressure on and clarifying that no agreement had been reached regarding the CGL pipeline.

We are here in support of the Wet’suwet’en and inspired by the firekeepers who kept a rail blockade going for more than three weeks in Kahnawake. While this blockade was dismantled voluntarily on March 5th, the firekeepers have moved their fire and acknowledged that they are ready to take more action as is necessary, given that CGL and the RCMP are still in the territory.

This is a crucial time for all of us to act. We are here to send a clear message out west that people all over Canada have their eyes on Wet’suwet’en, and that we know that the tentative agreement reached between the government and the hereditary chiefs last week doesn’t include the removal of CGL from their territory, which is a principle demand of theirs. Places like Tyendinaga, Kahnawake, and Listuguj have been holding it down for so long. We understand this is also a time to gather energies and prepare for the struggles to come. To settlers living in Tiotià:ke and elsewhere, this is a moment where our solidarity is needed more than ever.