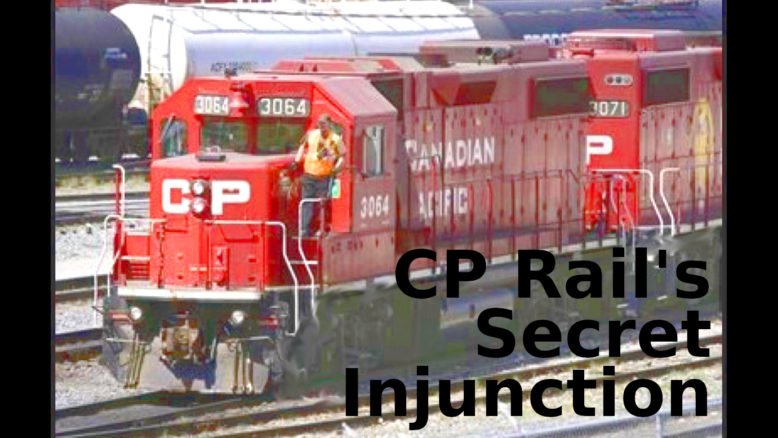 Sometime on Friday March 6th, 2020 in a secret courtroom on University Ave in Toronto, CP Rail will make a motion to have their interim injunction be extended to an interlocutory one. Didn’t know CP had an injunction just like CN Rail’s? Neither did anyone but CP Rail & Justice Myers – until they decided to serve recent Hamilton arrestees at their homes after 9pm last night.

We spent too much time thumbing through several hundred pages of documents today, and grace you with the highlights here.

The Superior Court of Justice (Ontario) heard the motion for an interim injunction on February 25th before Justice Myers. It was granted, and then varied on the 26th. There’s a hearing on March 6th to extend the injunction. That said, evidence sheets were captures and printed in early February, so they’ve been preparing for awhile.

The injunction itself has an enforcement order, directing police to enforce it immediately. Upon arrest, one would sign a condition stating they’ll abide by the injunction and released, or be brought before the court to be proceeded against for contempt of court.

The injunction not only includes an order to stay 50 feet away from the outside rails of the tracks, and to not trespass, obstruct or block, but also “directly or indirectly intimidating any of CPR’s employees, contractors, agents…”. It also includes interfering with deliveries and contractors to a site, as well as “aiding, abetting, counseling, procuring or encouraging in any fashion any person or entity to commit or attempt to commit the actions mentioned”.

But also nearly an exact replica of the CN injunction overall.

Things get slightly more interesting when it comes to the section that includes the evidence needed to file for the injunction – namely to prove or affirm that blockades will irreparably harm their business.

Most of it is still boring, but here are the clif notes:

William Law, who is the district inspector in charge of Ontario and Quebec within the CP Rail police confirmed that red flags and flares on tracks indicate operators must stop immediately. Crews observing them are not permitted to pass beyond them.

“The Hamilton Blockade” (their words, not ours)

That’s it. We did say only slightly more interesting.

Now mask up, get out there, and get away with it.