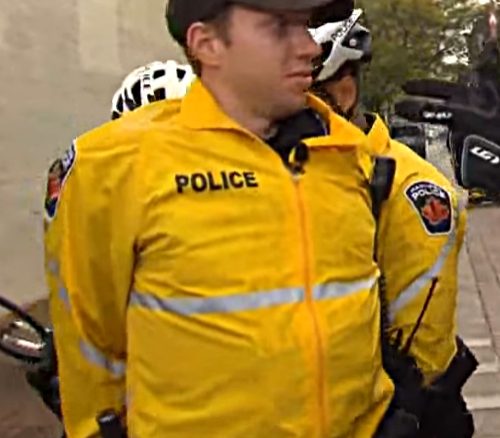 His name is “Shane”.

That’s his undercover name, and his real name. “Shane Bond”, is what he told us – with “us” being the different communities and circles in Hamilton he tried to infiltrate.

Shane was just another dude when he showed up. To be honest most of us didn’t take notice – at least not at first. There were no leading or intrusive questions. He didn’t incite divisive arguments or spread gossip. He was quiet – maybe even boring. And while he did persistently harass some women in our community to grab a beer despite rejection it didn’t scream “cop” so much as misogyny – an experience that’s unfortunately still somewhat normal in our circles. 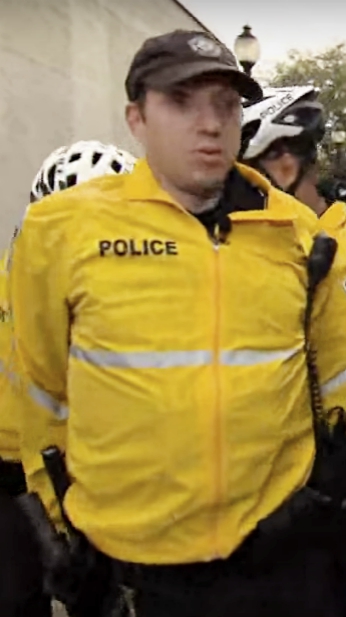 To those who engaged or paid attention, Shane presented himself as a bicycle riding part-time painter, complete with a shitty ‘supercycle’ bike and painting pants. He had an apartment at 20 Emerald Street North – a Hamilton Housing building for folks with low income – that was furnished with a leather couch, some photos, and some paintings. Shane had “a girlfriend” who “worked at a private day care” who no one met, and a muscular feminine presenting friend with below-shoulder length brown hair “from Dundas” who came to at least one event.

Shane’s arrival came after several years of dedicated anti-pipeline organizing and heightened anti-gentrification efforts. He was known to attend The Tower for events and socials, Hamilton 350 meetings, anti-pipeline events and a handful of public demos including an antiracist rally and a solidarity demo at barton jail.

Mostly, but not completely, Shane failed at his job.

For all the time he spent here trying to build relationships and ins he didn’t get far. It took some time to connect with people who interacted with Shane, verify their stories, and write this text but with some reflection we know that Shane didn’t have much more to offer his higher-ups than that which any casual observer could. He wasn’t successful in his intended infiltration. The only exception to this was that after having been around for two years, he was in the right place at the right time. Shane was shown a flyer for a demonstration against gentrification on Locke Street, which he attended, and he appears to be giving evidence against people charged in connection with it.

Ultimately Shane was best at was avoiding cameras – or at least ours. We had a hard time finding a picture of him. But as it turns out; back in 2011 Rick Mercer hung out with Hamilton Police and Shane – a then-yellow-jacketed ACTION cop – made a promo video with Mercer where you can see him shortly after minute 2:12. Since embarrassing shit never really disappears from the internet, we grace you all with his rat goof face anyway.

In His Words: Shane’s Backstory

Shane told folks he was from Saskatoon and BC. He seemed to know a good amount about both places, including detailed climate and geography. He said he painted part-time and sometimes attended events “right after work” in painter’s pants. His apartment was mostly-furnished, had art on the walls “painted by his mom” and what we understood to be personal photographs. He said he enjoyed loose-leaf tea – but almost always had shitty steeped tea with him.

At one point Shane went somewhere during his undercover operation here in Hamilton for approximately 6 months. Whether that was to actually be by his mom’s side in BC as she died, as he explained, or to infiltrate another community, we don’t know – but we strongly encourage those organizing around gentrification or pipelines to share his photo and any experiences they’ve had with him.

Shane’s political analysis was lacking and never really evolved despite attending workshops and events. He’d often try to relay ideas or sentiments using common terms or slang, but out of context. The result was abrupt, unsettling interactions like a sudden proclamation of “I’m so glad I’ve found someone else who hates the pigs!”

He was also seen more than once hovering around an area or group of folks listening in on conversations, and when he returned from his “trip to BC” Shane could recognize and recall people’s names perfectly, whether they’d previously conversed much or not.

Recently the Mining Injustice Solidarity Network (MISN) released a great reflection on their experiences & reflections with an undercover in Toronto. It talks a bit more in depth about how some indicators may not be enough to warrant expulsion from a community, but certainly a good reason to get to know someone more. Importantly, it also talks about ways we might be able to identify and confirm undercover. It’s worth reading.