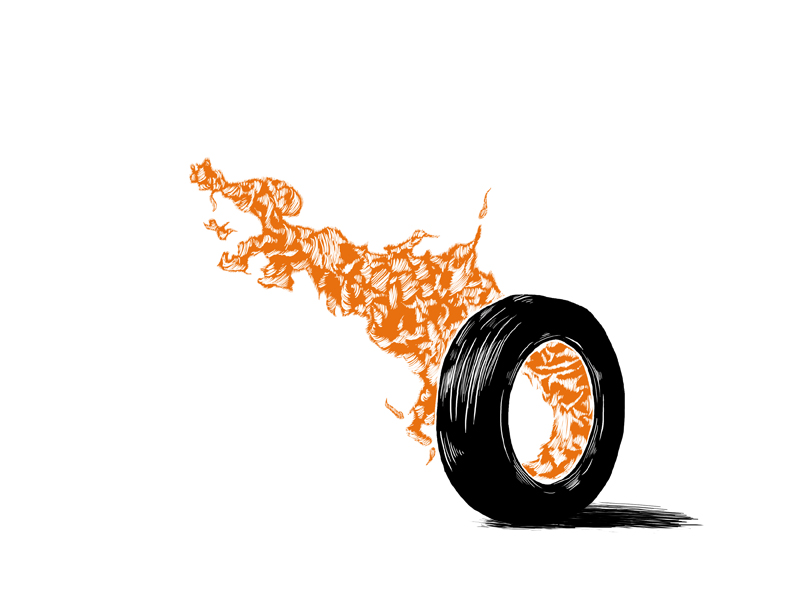 On the icy morning of Friday the 13th, we awoke at dawn to venture into the winds and cold, where we were met by the beautiful full moon in Cancer setting towards the horizon, as a hazy sun rose in the east.

Together, we blocked the morning’s rush hour traffic headed downtown along Notre-Dame Est in Hochelaga-Maisonneuve, with discarded Christmas trees and a pile of flaming tires. Above the street, a banner was hung from the railway bridge between the port and the wasteland. Jumping through the snow, dragging heavy things, watching out for one another, nurturing new skills, developing a multiplicity of tactics together, and building caring and meaningful relationships of struggle. Once the blockades were set and the fires lit, we quickly and carefully dispersed to get to warmth and safety.

This new year opens with the beginning of two “celebrations”: the 150th anniversary of the Confederation of so-called Canada, and the 375th anniversary of the colonial occupation, destruction, and genocide of Kanien’Keha:ka territory through the creation of the city of Montreal.

We wanted to express our disgust and rage for these celebrations by beginning the year with this action. We were also inspired by the war cry The Year for Indigenous Liberation. Another inspiring call was launched this week, 150, 375: Rebels come alive!, inviting the disruption of the colonial anniversaries of Canada and Montreal.

We believe in expressing our rage against all forms of control and domination, along with the cities, states and societies that uphold and require them.

We are inspired by anti-colonial and anti-capitalist struggles happening near and far, and the centuries of struggle of Indigenous nations and communities fighting for land, water, and life.

Check out some stories of these fights at:
Warrior Publications
SubMedia.tv

We want to manifest our revolt in all possible ways against the nationalist bullshit, the racist as fuck capitalist driven mechanisms of surveillance and repression, and the social cleansing and misogynistic entertainment spectacle that are the result of the anniversary of this city. And everything. Fuck everything.