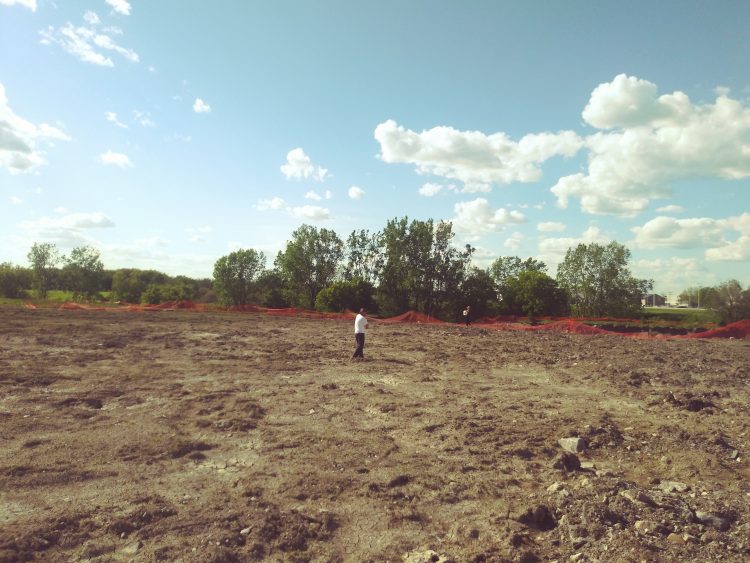 As we all know, the Canadian government decided to invest more than 56$ million into locking up hundreds of people in a brand-new prison in Laval, slated to open in 2021. On June 7th, we decided to take back this site of suffering and grief and transform it into a place of life and hope.

Thanks largely to a donation of organic seeds by a Quebec-based cooperative farm, we sowed the 377,500 square meter construction site with 490kg of oats, peas and fava beans. This action builds on the work of other community members and aims to encourage further efforts to stop the construction of the prison. We also see it as a way of preparing the ground for other projects to collectively reappropriate this land for the common purposes. No prisons, no borders!

The new prison in Laval is part of a 138$ million package announced by the federal government to accompany its 2016 National Immigration Detention Framework (NIDF). Of the total, 122$ million is allocated for the construction of two migrant prisons. Two Quebec-based firms, Lemay and Groupe A, have signed 5M$ contracts to build the prison in Laval. We are impatiently awaiting the announcement of the general constructor;

A true marketing ploy, the NIDF attempts to shift the public debate from the question of why migrants are detained in the first place to that of the conditions of their detention. In this way, the government prides itself in building a prison that camouflages the fact that it is a prison.

People who are detained often suffer psychological and physical violence at the hands of Canadian Border Services Agency (CBSA) agents. Since 2000, at least 16 people have died in CBSA custody.

Why do we oppose this prison?

Since its inception, the machinery of the Canadian state has been at the service of economic elites whose sole objective is to exploit resources here and in the Global South, in the process displacing Indigenous peoples throughout the world and extinguishing all forms of life. It is no secret that Canadian companies (Barrick Gold, Goldcorp, Pacific Rime, SNC Lavalin, etc.) working in Africa, South America and the Middle East are accused of violence (murders, gang rapes, forced evictions, etc.) and political interference. Old-style colonialism has been replaced by new forms of control over the bodies and wealth of the Global South, under unbridled capitalism and neoliberalism driving us inexorably towards ecological collapse.

The governments of the Global North promote a utilitarian vision of immigration where migrants are viewed solely as cheap labour; replaceable and temporary. But this migrant workforce has been created by ecological disasters (desertification, deforestation, air and water pollution, floods, etc.), economic and political crises, famine, war – in short, by destruction affecting the entire world, resulting from the greed of a handful of corporations and their masters, which organise this world order.

In this context, the prison, deadly and dehumanising, emerges as a global strategy employed by the west. The objective is twofold: first, to pursue an economic programme characterised by dispossession and unfettered capitalization of remaining resources by the private sector; and secondly, to establish spaces outside the law to confine those deemed “disposable” or a “burden.”

The investment of millions of dollars into the construction of a new migrant prison is not haphazard but exclusively economic necessity and is the result of decades of racist, xenophobic and colonial policies.

Our opposition to the detention of migrants is part of a broader fight against imperialism and colonialism.

— The Rise Up against Prisons and Borders Collective