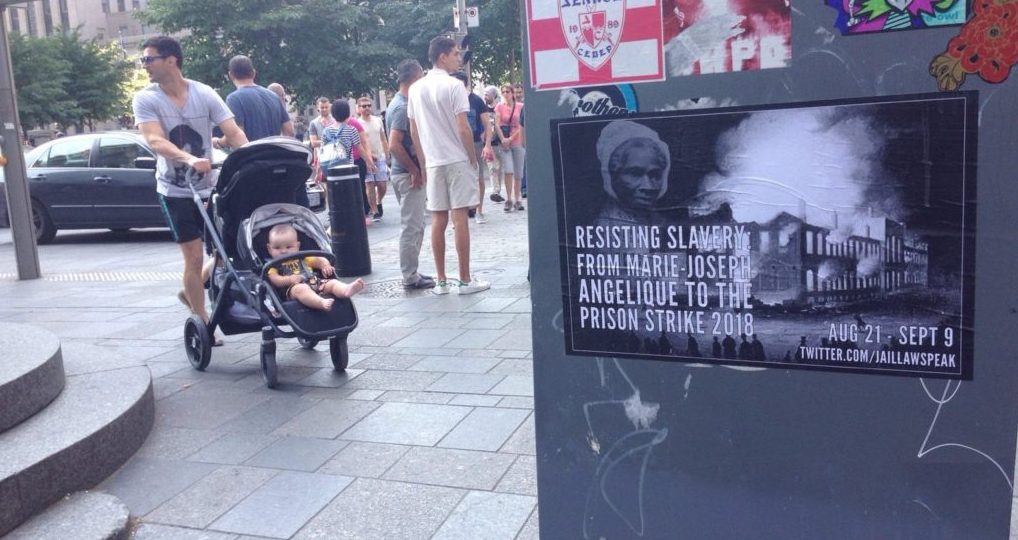 Some anarchists came together on the night of August 23rd to cover Montréal’s Vieux Port (Old Port) in posters that read in both French and English:

We postered along the same streets that Angélique was paraded down moments before she was hung, and then burned. Angélique, we remember. Slavery, stolen land, and attempted genocide define the contours of the ever-forming settler states of Turtle Island (North America). In solidarity with prisoners currently fighting slavery inside all US prisons, we wanted to (re)tell the story of Marie-Joseph Angélique. Angélique was a Black woman enslaved in Montréal during the 18th Century who was sentenced to torture and death for allegedly setting fire to her slave owner’s domicile, which resulted in the majority of the city of Montréal burning. We offer Angélique’s story as a reminder that Québec and Canada were engaged in the practice of slavery for over 200 years. We chose Angélique’s story because it connects the city we live in to the ongoing story of resistance to slavery on this continent.

US prisoners have used this strike to reference a long history of resistance to slavery. August 21, 1831 marked the start of Nat Turner’s Rebellion, a significant moment of resistance by enslaved people. August 21, 1971 also marks the day the state killed George Jackson, a Black revolutionary prisoner deeply involved in struggles for the liberation of Black peoples. Jackson’s death ignited an intense period of prison organizing. September 9, 1971 marks the start of the Attica Uprising, one of the most significant moments of resistance inside US prisons. Prisoners at Attica released a list of comprehensive demands to improve their living conditions. Those demands were never met but have clearly influenced the prisoners on strike today.

Resistance to slavery is an ongoing struggle for those facing incarceration in the United States. The 13th Amendment to the US Constitution states:

Neither slavery nor involuntary servitude, except as a punishment for crime whereof the party shall have been duly convicted, shall exist within the United States, or any place subject to their jurisdiction. 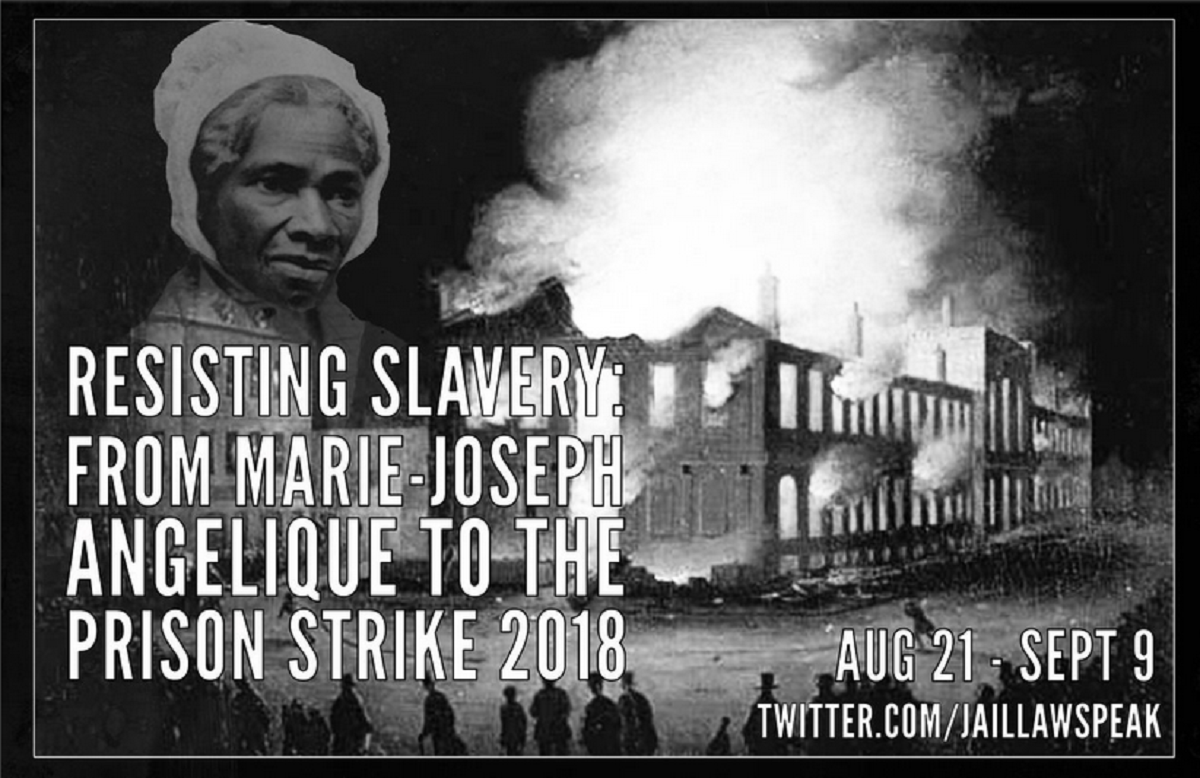 Slavery actively continues within US prisons. The 13th Amendment legally justifies the violent, brutal conditions that define this carceral system. These conditions are what prisoners across the States will be striking against over the next two weeks. And while Canada does not have a similar constitutional amendment, we view prisons not only as an apparatus of domination, but also as an extension of Canada’s settler colonial project. The primary aim for the settler colonial project is to control land for settlement and for the extraction of “natural resources”. It is through these capitalist relationships to land that the colonial system secures its wealth and future existence. However, First Nations, Inuit and Métis Nations are viewed by the political and economic elite as an obstacle to this settler future. The settler state and society have employed tactics and strategies such as: racialized and class-motivated surveillance, policing, military repression, and incarceration. Containment and control are not only central to the settler colonial project, but prisons and incarceration are a strategic part of keeping Indigenous people off the land, and thus less able to challenge state power.

Slavery, stolen land, and attempted genocide are the founding stories of the settler states occupying this continent, and they are the foundations of the systems we seek to abolish. We weave together these aforementioned moments in history to illustrate how they belong to a longer, more global context of colonial expansion, exploitation for profit, and great wealth for some humans at the expense of the objectification of so many forms of life.

Solidarity with the prisoners on strike, in memory of Angélique.

Against prisons, against slavery, against colonialism!