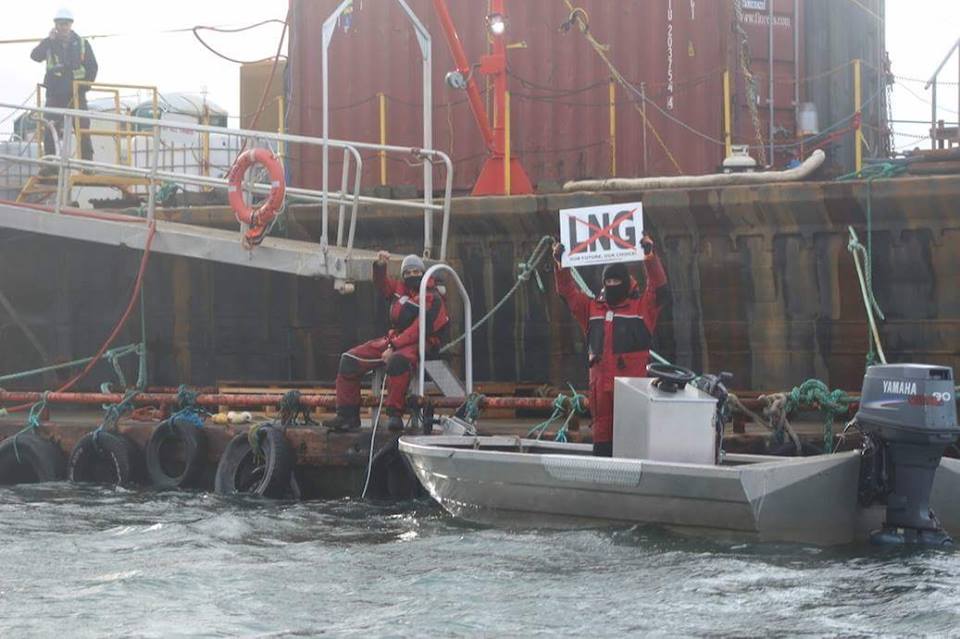 Resistance to LNG on Gitwilgyoots Territory

In late August, a crew of women of Tsimshian, Haida, Nisga, and Gitxsan bloodlines initiated the defense of Lax U’u’la (Lelu Island) and the Flora Bank1 from LNG industry destruction. The Gitwilgyoots Tribe Sm’ogyet Yahaan (hereditary chief) and Ligitgyet Gwis Hawaal (hereditary house leader), and their families began a defense camp on Lax U’u’la, which is Gitwilgyoots traditional hunting and fishing territory. They were also joined by various significant hereditary people from other Tsimshian tribes, and a motley crew of native and non-native outside supporters.

This camp has been set up to prevent any further destruction of their land, as Petronas and Pacific North West LNG (PNW LNG) are planning on building a $11 billion liquefied natural gas (LNG) plant on Lax U’u’la, which is at the mouth of the Skeena river near Prince Rupert, BC. They have been conducting environmental and archaeological assessments since 2012, which have resulted in over a hundred test hole sites and cut blocks, and have in the process cit down several culturally modified trees. This plant would be fed by 3 pipelines, including the recently provincially-approved Prince Rupert Gas Transmission (PRGT), owned by Trans Canada, which crosses through multiple indigenous territories, and which is currently being met with resistance from the Gitxsan people at the Madii Lii encampment. This proposed LNG plant has been opposed not only by the Sm’ogyet Yahaan, but has also been unanimously refused by the 9 allied Tsimshian tribes of Lax Kw’alaams, who turned down a $1.25 billion offer by Petronas at 3 separate meetings in Lax Kw’alaams, Vancouver, and Prince Rupert. Regardless, in preparation for the LNG plant construction, Petronas/PNW LNG have been trying to continue to conduct environmental and engineering assessments around Lax U’u’la, which include test drilling that are actively destroying habitat essential to all the salmon that run throughout the Skeena Watershed.

One of the major rivers that flow into the Skeena is the Wedzin Kwah (so-called Morice/Bulkley), which is the river currently being protected by the Unist’ot’en Clan, grassroots Wet’suwet’en and their supporters. The ‘Unist’ot’en Camp’ was also started to resist mega petro-infrastructure (including another major pipeline project of the Trans Canada corporation). The Unist’ot’en, Madii Lii, and Lax U’u’la are the first three bold frontlines against LNG development in the Skeena Watershed. At the time of this writing, others are organizing towards opening new action fronts in this bioregion.

The importance of the salmon is not abstract or theoretical. In addition to the negative mental health effects of disconnection and destruction of the land, most communities that live within the Skeena watershed rely on the salmon, oolichan, and other seafood to feed their families. Even if you are broke, and can’t afford food at the grocery store, you can still rely on the river’s steady supply of wild salmon to feed your kids and get through the winter. The same can be said of wildlife such as moose, deer, beaver, berries, etc…which would all also be heavily affected if these projects are realized. Many people also maintain a relatively autonomous income within the current capitalist reality by harvesting sustainably from this bounty.

Those who depend on our labour and obedience have always seen people’s ability to sustain themselves independently as a threat. Forced state dependence was and is a goal of colonization. Dependence must be created to limit community mobility to bordered areas (such as villages, cities, or reserves). These areas are easily controlled, and any resistance or insurgence can be monitored and mitigated. Those who know how to live with the seasons and off the land are a threat, as they do not need what the state provides to thrive.

The Canadian state and international corporations are investing in resource extraction projects all across so called Canada. The impact of these extraction projects on life-sustaining resources such as clean water, wild game, and medicinal plants in not an unintentional side-effect of capitalism. It’s killing two birds with one stone. The pipelines, mines, fracked gaslands, and railroad expansions are not individual projects—they are all part of the same effort to maintain a society and lifestyle that is dependent on dwindling natural resources, while at the same time destroying the potential for any life outside of the state’s control.

This struggle is also inextricably connected to indigenous cultural revival, decolonization of the land, our minds and social relationships, anti-patriarchy and genuine reconciliation between natives and non-natives. Of course, this also means the destruction of the state and capitalist economy.

To date, the resistance to Petronas/PNW LNG’s project has mainly been on the water. Their project is still in it’s initial stages, in that there are still some engineering assessments that need to be performed prior to beginning construction on the actual plant. In practice, this has primarily taken the form of trying to prevent the workers from performing any work, and disrupting environmental and engineering assessments. This means escorting environmental surveyors off of the Flora and Agnew Banks, preventing the drill boat from entering and anchoring on the banks, slowing down or turning back charter boats bringing workers to the barges. So far, these efforts have been limited and unfortunately has only temporarily shut down drilling operations. However, with the growing force of warriors and expanding solidarity it is still possible to break Petronas and Christy Clark’s dream.

There is also resistance by re-asserting that Lax U’u’la is used as a place of healing and ceremony. Infrastructure is continually being constructed and there are other preparations for defense of the island itself (which also serve to maintain and expand water operations). Several structures have been built, and once there is less consistent confrontation, there is the intention to use these spaces as a place to teach youth about ancestral ways of living off of the land, and to heal from the continued traumas of colonization.

For thousands of years, communities have sustained themselves by the plentiful offerings from the Skeena River and surrounding landmasses. These resource extraction projects threaten to destroy people’s ability to live off of the land, as opposed to the state. European colonization brought the near extinction of the prairie buffalo, and if we don’t fight, the wild pacific salmon will surely follow.

If we wish to see victory in this struggle against petro-corporations and the Canadian state we must continue to provide solid material support. We also need to proliferate social agitation and disruption of daily life in the population centers throughout this region and beyond.

There are many ways to show solidarity with this ever-expanding and fierce resistance. Funds are always needed for boat fuel/maintenance, and the camp is specifically trying to raise enough money to buy crab traps, new boats, and fishing line so that they continue to harvest food in and around Lax U’u’la, to provide for their elders and communities. You can also always come and visit the region on your own, with a buddy or with a crew to contribute on the ground of this growing defense camp. Struggle is always strengthened by a de-centralized and broad attack, solidarity can also include resistance to industrial developments in your own backyard (Site C Dam, the Trans Mountain and Line 9 being just a few examples). These projects are also facilitated by the bureaucrats who work for the governments and companies and who’s offices are located in urban centres. In the past, solidarity has been shown through noise demonstrations and other actions against these offices and company infrastructures.

You can donate to the Lax U’u’la defense through their GoFundMe page at: http://www.gofundme.com/lelu_island

1. A lot of the focus of this struggle has been the eelgrass and the Flora Bank, and how this habitat is essential to development of juvenile salmon that run all throughout the Skeena. While we don’t want to diminish the importance of this habitat, we also recognize that these crucial areas do not exist in isolation. The Flora Bank can not be separated from Agnew Bank, the surrounding landmasses, and the currents, sediments, and creatures that surround and impact it in more ways than we can possibly imagine. We caution against the strong focus on the Flora Bank—if the LNG processing plant is moved to Ridley Island (a neighboring island not surrounded by the Flora Bank), it will still facilitate a capitalist society and reinforce a colonial state. 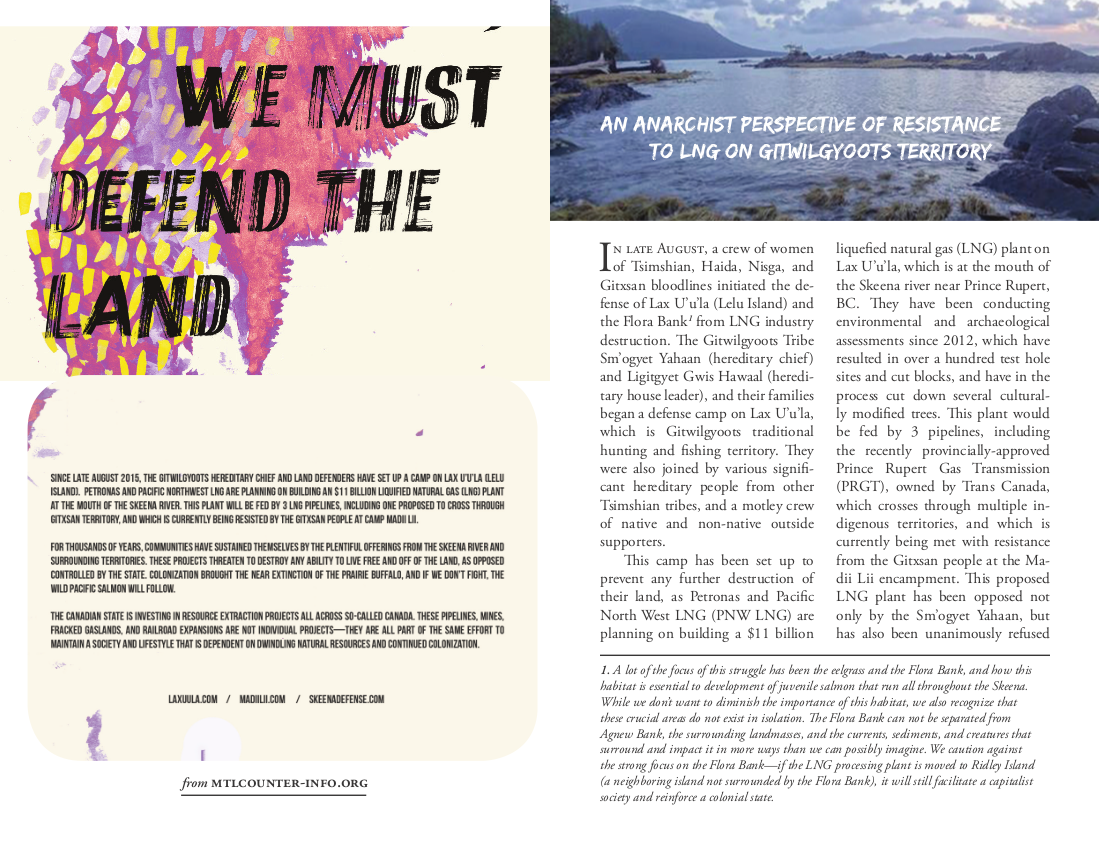