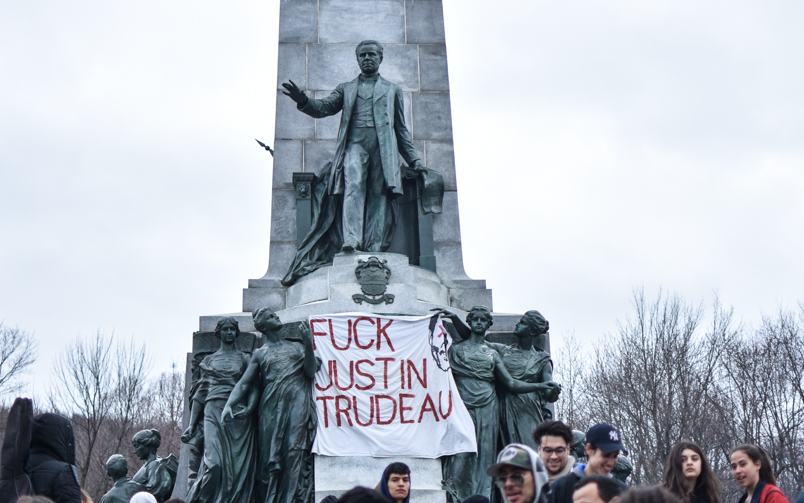 On April 20 2017, about ten of us went to the east slope of Mount Royal with zines and a banner. The zine, which we had put together in a bit of a rush just a few days before, was entitled Dank Anarchy —a joke and a working title that just never got changed. The banner said FUCK JUSTIN TRUDEAU. Our intention was to distribute the zine, display our banner, and finally, just hang out and have a good time.

It being the end of winter in Montréal, I’m really fucking not used to running. It is exactly 16:20, and as I puff up the hill towards my friends, jeers that it’s already over float after me. I reach the top of the hill and pull the banner out of its bag as I jog the last few steps, starting to unfold the thing as I approach. I’m asking myself why I just ran two and a half clicks to be at a 4/20 spectacle.

This project was born of a conversation a few months earlier, in which a comrade, recently moved from the cannabis-infused Western port of Vancouver, suddenly declared, “You know what I’ve always wanted to do? Anti-capitalist 4/20.” And then the comrade he was talking to was appropriately stoked. So a callout for articles for a zine was posted on a few places on the internet, submissions came in, and there were some discussions of what an anarchist presence at 4/20 might look like.

In Montréal, before and after winter, the east slope of the mountain is a place where people often relate to each other in a sort of naturally anarchic way. Okay, maybe that’s a stretch—but there is a lot of crime going on, not a lot of cops around, and people generally relate to each other in a less alienated, less hierarchical way than elsewhere. There are much larger gatherings on Sundays, when the tam-tams happen, and there are often low-key raves at the Mordechai Richler gazebo. The biggest thing, though, is 4/20, which brings out several thousand people each year, from a very wide range of ages and backgrounds.

Anarchists have largely abandoned spaces of this kind, or never engaged with them in the first place. That is at least true in Montréal, but seems to be the case all across occupied Turtle Island. To be fair, there might be some good reasons for this—like, for instance, a personal distaste for pot, or for the politics of weed legalization—but we think these spaces are actually a little bit fun to be in, especially for anarchists. Having lots of people around, and no one in charge, is generally a good environment for us, no matter what. Also, as much as we need critique, we should also try to see what is beautiful or worthwhile in any occasion of collective non-productivity (or to use the phrase of one @news commentator put it, any occasion of dolce far niente).

Besides, we make these spaces better just by hanging around. We can bring a little drama, a little lively conversation, to a space that is otherwise entirely passive, and where the only political messages present are the entirely unimaginative ones presented by Young Liberals of Canada and those too damn hooked on pro-market economic dogma. This reportback is offered in the hopes of pushing more anarchists to leave their living rooms and get a little rambunctious, a little ostentatious, in what social spaces remain for us to contest and partially create. While 4/20 is over, there are still music festivals coming up, pro-weed demonstrations and rallies, graduating class of 2017 field parties, and informal gatherings of all kinds (Rainbow Family anyone?), all across the territories of the United States and the Canadian state. We think that such events are worth attending in and of themselves, problematic as they may be – that writing them off beforehand, at the very least, is not very interesting.

So, some critical comments, and then a zine for y’all:

Over two hundred copies of Dank Anarchy, vol. 1 were distributed. Alas, the content was all in English, with a very short introduction in French. This wouldn’t be a problem in most places, but not the best for our context, where French is, for most folks, the main language of both casual social interaction and political discussion. This is even more true of those of a pre-university age—which, to be clear, was the group we were most explicitly trying to reach. The submissions we received were all in English, and our own capacity to translate was limited, so there wasn’t much to be done about it. But it ain’t good. Trying to reach out to people, it is best to use the language in which reading feels the least like a chore.

That said, we should have also printed more zines. There were literally thousands of people. We could have handed out four slash twenty times as many as we actually did.

The original idea was to have some kind of established presence with a banner (held up high), a tent, and maybe some kind of music. People would be drawn to us, where we could hand over zines and have a chat about it, if they were down. Our friends would be able to find us in the crowded space, perhaps catching sight of the banner from afar. But we weren’t early or organized enough to make that happen, at least not initially. We had wanted to set up further away from the central locus of activity, the angel statue, on a small hill overlooking it all – and thereby become our own locus.

We decided that the angel statue was a better place for the banner to hang, that it was better for angels to hold our proclamation than for us. People walked by with their eyes glancing up at it, looking variously tickled, perplexed, offended, or wholly nonplussed. One of us overheard someone say “That’s treason!”, so we felt that we had at least accomplished some small intervention into this otherwise pretty bland space.

So we were able to hang it and “seize the narrative” a bit (it was visible from a long way off, and featured heavily in the social mediatization of the event). But, it’s worth asking, to what end? The message of the banner did not directly relate to any article in the zine, and some people didn’t even realize that the zines and the banner were part of the same… whatever it was that we were doing. One of us eventually suggested to safetypin a smaller piece of fabric to the bottom of this multi-use reusable banner, which would say, of course, DANK ANARCHY.

Eventually, those of us who were left—who hadn’t found ourselves too high in an overstimulating space, who hadn’t gotten lost in the crowd—decided to grab some beers and hike up the mountain, in part because it was getting cold and in part because that would be a fun thing to do. On the way, we met a few more people, and handed out a few more zines, and also just talked to each other. Some of us in the crew hang out all the time; others, we hadn’t seen in a while. We had a fire. We had a view of the Plateau. An affable young stoner on welfare joined us to listen to hip hop we had playing, and hear us be ridiculous; he joined us on the way back down too, and got a zine. We haven’t heard back from him yet, but here’s hoping. It was as good a part of the day as any other, and good too in that we had become more ourselves, less the task we had assigned for ourselves.

If we had had more people involved, that probably would have gone some way towards making things go smoother on basically every front. As it was, the various parts of the thing were largely coordinated through a single individual who proved unreliable on a number of fronts; there was little communication before the event that didn’t go through this person. One zine submission slipped through the cracks entirely for the first edition, because in part, it was this one person responsible for everything, and he fucked up. A way to avoid this, obviously, would simply to have been more organized, more circular, from an earlier point. But that can be hard when other collective projects, the gauntlet of living under capitalism, and a bunch of friendships and hobbies are making demands of your time as well.

So that’s it. We did a thing for anarchy, a few of us got a little intoxicated on the way, and maybe we even learned something in the process. At least a few of us would like to do something else for next year too.

THE ZINE & ITS FUTURE

Featuring the work of Llud, Nausikaa, Eon, and shadowsmoke, published by underHILL and designed by the jean weed & alfredo budnanno syndicate, here it is, Dank Anarchy vol. 1, in an ever so slightly more polished second edition for generalized internet distribution. We might do a vol. 2 but don’t count on it. Check it out, and if you have the skills, maybe send an email to 420anarchie@riseup.net to help us make a French version.