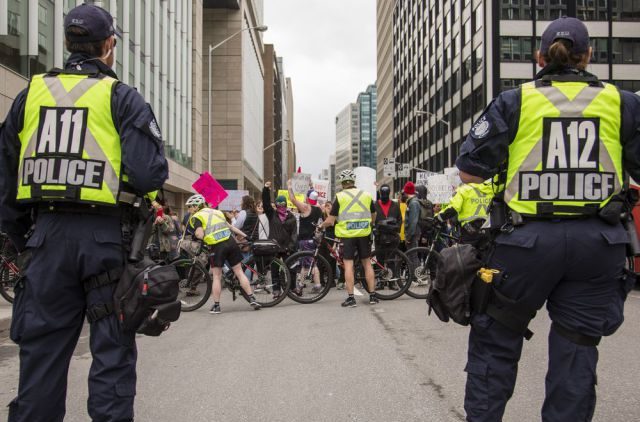 Each May, thousands of people meet in Ottawa for the “March for Life,” an initiative of organisations opposed to free choice and free information concerning the voluntary termination of pregnancy. This year, it was on May 10th that the anti-choice demonstrators took the streets of the capital city to demonstrate against the rights of women (and every person with a uterus) to control their own body, to have the right to an abortion. The Riposte Feministe organised a Montreal contingent to join the counter demonstration with feminist groups from Outaouais and Ottawa. We were about 50 people leaving from Berri-UQAM station that morning, caffeinated with indignation.

The demo departed from Confederation Park, downtown, where there were already activists distributing pamphlets to passers by. For about an hour, women and those of diverse sexual and gender identities spoke about the common themes of defense of bodily autonomy in all its expressions, colonial and imperial state institutions who silence the voices of gender oppressed people, and the right to safe, accessible, and legal abortions.

At 1:30pm, we left the park, strong and in solidarity, to block the departure of the “Pro-Life” demonstration, a hypocritical name that distracts from the real meanings of this conservative position: the desire to control women and their bodies, the discrimination against LGBTQIA+ people, and racism. Despite our smaller numbers, we formed a solid and vocal opposition that effectively prevented the anti-choice demonstration from advancing. After almost an hour of resistance, the antifeminist camp gave up and moved back. This was the most significant symbolic moment of the day.

The counter-demonstration split in two to attempt to again block the demonstration, who had continued their march on another parallel street. We took another smaller perpendicular street to reach them. The police passed us in order to create an impenetrable wall out of their bicycles to prevent us from crossing the intersection. This enclosure was a police repression tactic: one consisting of making a revolutionary radical subject exist; us, a dangerous and violent counter gang. The cops weren’t looking to destroy us, but rather to produce us as a political subject. As the Invisible Committee explained it in To Our Friends: “When repression strikes us, let’s begin by not taking ourselves for ourselves. Let’s dissolve the fantastical terrorist subject which the counterinsurgency theorists take such pains to impersonate, a subject the representation of which serves mainly to produce the “population” as a foil—the population as an apathetic and apolitical heap, an immature mass just good enough for being governed, for having its hunger pangs and consumer dreams satisfied.”

Our non-violent intentions were clear from the beginning of the counter-demo. We expressed our anger peacefully. The police repression that we experienced was therefore unjustifiable through excuses of safety. It is evident that the force they used served to legitimize the “Pro-Life” position. It was an undeniable demonstration of support for anti-feminist arguments, camouflaged under a supposed responsibility to protect the uncontestable freedom of expression in a neoliberal society.

The repression also served to reduce our positions to unfounded and violent postures. The cops succeeded in inverting the backlash, transferring the violence of the anti-choice position onto us, who were only affirming our rights to our own bodies. This allowed them to open the path for a openly violent masculinist and anti-feminist demonstration to turn toward our immobilized and thus vulnerable contingent.

The “peace line,” formed by cops, reinforced the old dualist paradigm, creating an opposition: on one side, the good citizens defending the right to life, and on the other, the gang of violent insurgents. But we must not forget that the real violence is found on the protected side. This demonstration reflects the rise of the far right and of fascism in North America. We could read slogans such as “All Lives Matter”, “Make Canada Great Again,” and “Not Your Body Not Your Choice”. The majority of these posters were held by cisgender white men. What’s more, there were many high school students, mostly coming from catholic schools, who came with their pro-life signs made in class, which reflects state and systemic indoctrination imposed from a very young age.

Let’s continue to denounce neo-nazi and fascist movements so we don’t normalize violence like this. Let’s be in solidarity with Indigenous peoples, racialized people, women, and people of diverse genders and sexualities! Despite the emotional, psychological, and physical difficulties, this counter demo brought forward activist voices past and present and served to remind us that we still need to fight. Thanks to the Montreal Riposte Feministe for reminding us of the living force of our community.