Despite a sizable turnout on a rainy day, May Day in Montreal left many feeling like the police succeeded in keeping our celebrations tame and orderly. The anti-capitalist demonstration started in two locations: a downtown contingent organized by CLAC (Convergence of Anti-Capitalist Struggles), and an anti-fascist, anti-borders contingent which would join the downtown one from the east. This was organized in part to avoid demonstrating alongside the PCR, authoritarian communists that CLAC persists in organizing with.

The downtown contingent saw clashes between the PCR and the police after a bank was vandalized with paint bombs, leading to an arrest of one of their militants. The east contingent had at least one hundred anarchists wearing masks, some of whom carried black flags. People seemed to be waiting to join the demonstration downtown before popping shit off, but unfortunately, before this could happen police flanked both sides of the demo. Once the demonstrations merged downtown, this flanking was deployed to a degree not yet seen in Montreal. Nearly 100 cops walked on each side of the crowd, so that along nearly its entire length at least one sidewalk was held by cops. 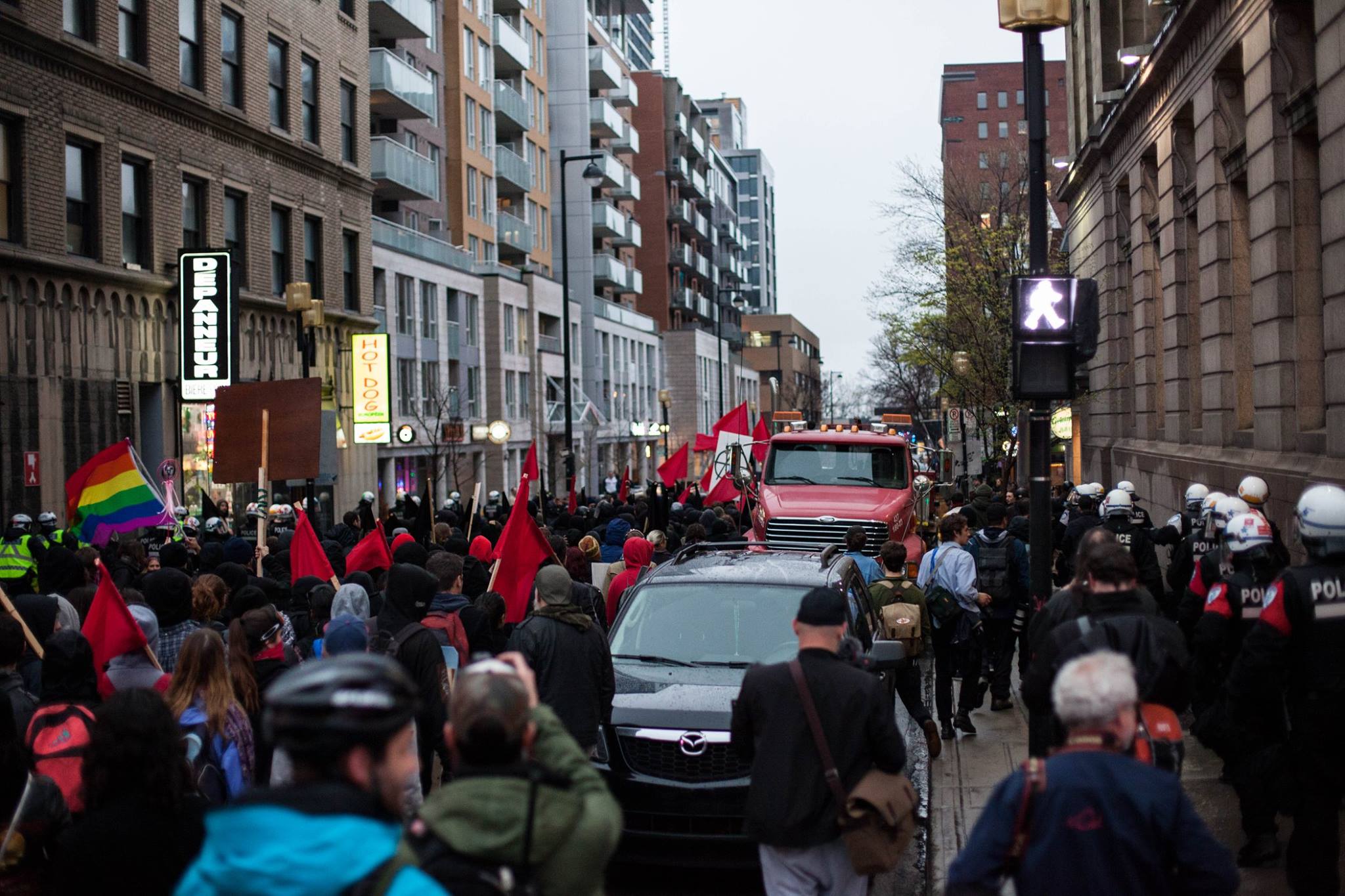 An atmosphere of vulnerability to these police tactics prevailed until the demonstration fizzled out hours later. It deterred major property destruction and attacks on police, without cops even having to crack down. At any given time, police on either side were ready to intervene, and the demonstration had neither side-banners nor enough density to be able to defend against the police attacks that would likely follow any unlawful action. Apart from a few luxury car windows being smashed, the tension never materialized into collective action.

The police have all year (and large budgets) to prepare for annual rituals of revolt that Montreal anarchists have been cultivating, such as May Day and March 15. The defeat of this year’s May Day reaffirmed that we should be experimenting with demonstrations (spread through word-of-mouth or social media) that don’t give police as much time to prepare. However, we don’t want to abandon these annual rituals either. Like December 6th in Athens, May Day in many cities, and the Day of the Combatant Youth in Chile, annual rituals of anarchist rioting can still serve us. There are many people who will only be in the streets with us on May Day when there’s no major social movement. Interacting with them, and preparing for moments of generalized social rupture when we will have to sometimes engage with a highly prepared and mobilized police force, make these traditions worthwhile.

It’s impressive how many anarchists came out on a rainy May Day, seemingly in affinity groups. Here are two proposals for how this significant potential could adapt to the recent development in policing tactics:

1. We need to start acting like a bloc, not just wearing black

As anarchists donning the black mask, we need to get better at staying together as a bloc. Our default is to be scattered through the crowd in affinity groups, or even alone. Although this is likely due to the social barriers of people not knowing each other, we need to start to overcome these to form effective black blocs rather than sparse clusters throughout the demonstration.

We need our own side-banners to help delineate and defend this bloc. Without side-banners, we have nothing to prevent police from easily cutting into the crowd to make targeted arrests. Side-banners also help to obscure police vision on who is doing what. They are a mobile barricade, and we need to start prioritizing their deployment. 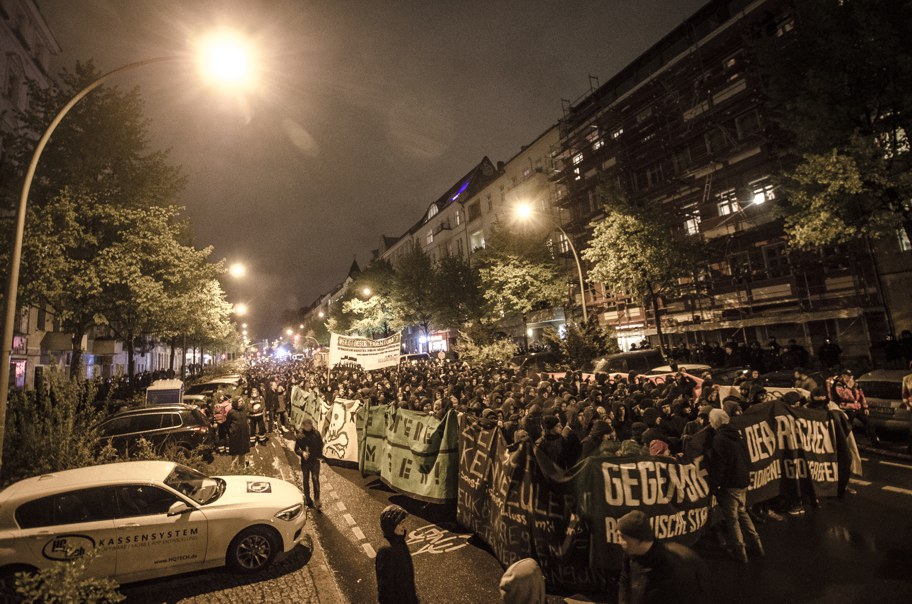 May Day in Berlin this year, where side-banners are used in succession to defend against police flanking.

As for where to position the bloc, we think it makes the most sense to copy the ‘Cortège de tête’ from our comrades in France, who during the Loi Travail revolts always had the combative section of the demonstration at the front. If you’re there to participate in the bloc, you know that you can always find it at the front. Although in the past, hanging back has meant that smaller groups receive less police attention and can more easily act, now that the police are lining the entirety of the demo this just leaves those smaller groups isolated.

Let’s refuse to allow ourselves to be pre-emptively kettled by police flanking us on the sidewalks. This could be accomplished by building a culture of consistently taking the sidewalks whenever we take the streets, before police can fill them. Past attempts to make this happen have always remained small and police have managed to push through. This is where reinforced banners and combative flagpoles could come in handy. If police try to take the sidewalks back from us, a team anchored by a reinforced banner could block their passage and make them vulnerable to projectiles thrown from behind the sidewalk and street banners.

Although many of us who show up for these moments don’t have organizing relationships outside of them, if we make efforts to prepare within our affinity groups in ways that will sync with the efforts of others, our rituals could take on a renewed force.

See you at the (mobile) barricades!