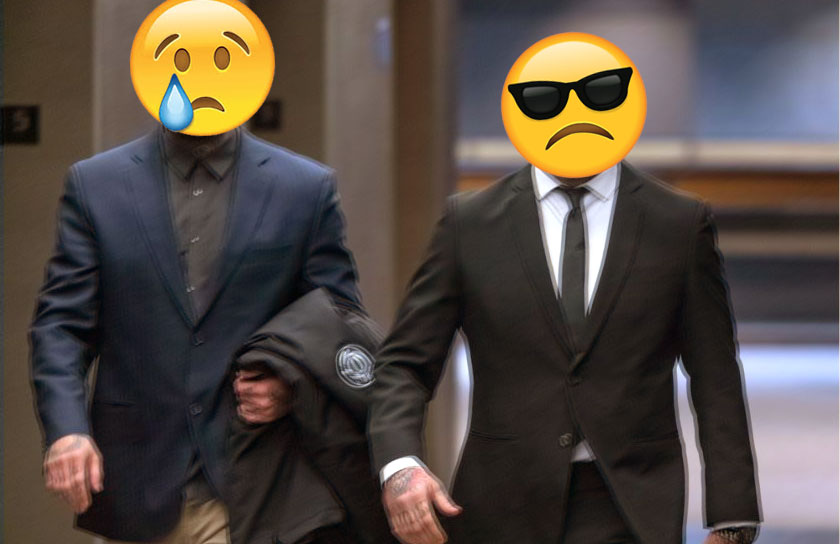 Montréal, December 12, 2019 — Today is the fourth and final day of the trial of the recognized leader of Atalante Québec, Raphaël Lévesque (alias Raf Stomper), at the Palais de Justice in Montréal. Lévesque is charged with mischief, breaking and entering, and criminal harassment. The charges arise from a stunt Lévesque and six other Atalante militants pulled on May 23, 2018, at the Vice Québec office.

We haven’t been all that interested in the trial up to this point. All we’re seeing is a court circus out of all proportion to the action that led to the charges. We are entirely aware of the fact that our perspective on the issue will differ from that of the media (which is a party to this little affair), the “justice system,” and the generally held liberal position of Québécois society. That’s why we thought it wise to explicitly formulate out position [for additional information, media can visit https://montreal-antifasciste.info or contact us at alerta-mtl @ riseup.net]

We think that the almost political character that this trial has taken on because the media was the target plays right in to the fascists’ hands. It would have been better if, from the outset, this action had been treated as what it was (a weak example of political theatre that would be quickly forgotten), rather than turning to the criminal justice system and shining a spotlight on Lévesque, giving him the attention he craves.

Furthermore, the substance of the case is very debatable and the outcome far from certain. Whatever the verdict may be, we see the whole exercise as a losing proposition. If Lévesque wins, he comes out of it vindicated and energized, which, one would suspect, will mean that he and his band of cretins repeat this sort of action in the future. If, on the other hand, he is found guilty of criminal harassment and/or mischief, jurisprudence that further reduces the playing field for legitimate direct action is established, not just for the right but for the left as well. Put differently, the state ends up with a new tool for suppressing opposition, whatever its source.

On the other hand, if the media reports about the trial from the first few days are accurate, it’s obvious that the judge fell face first into the trap the fascists had laid for her, in spite of the mass of evidence accumulated about the true nature of Atalante: depoliticization, even “de-demonization,” which is the desired outcome of the entire ruse.

The Palais de Justice is not a favourable terrain for the antifascist struggle. We’re not proposing a dogmatic blanket refusal to ever engage on this terrain, and don’t reject the possibility of using it if specific gains are possible, although the likelihood of this is extremely limited, but we certainly don’t believe that we should count on the courts to win this war, or even any important battle. The courts only exist to ensure one thing: the liberal order, i.e., the necessary conditions for the reproduction of state and the capitalist system that supports the systemic inequalities that our movements are working to eliminate.

We believe that the anti-racist and antifascist struggles must, first and foremost, be conducted daily in our living and working environments, in our communities, and in the streets, with constant information campaigns and the promotion of the values that motivate us. However Raf Stooper’s trial ends, the struggle will continue. Montréal Antifasciste, its allies, and its sympathizers will continue to track, expose, and generally disrupt the lives of the fascists from Atalante and all those who advance political projects based on inequality and exclusion—until we win!