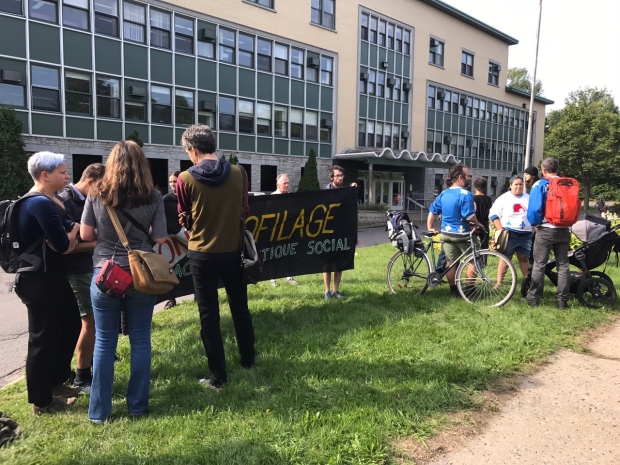 Montreal, 29 August 2017 — This morning, August 29, Montreal activist Jaggi Singh was arrested and charged with resisting arrest and taking another person’s identity, for having jokingly given his name to police as former Nordiques’ player Michel Goulet on August 20. He is being transferred to Quebec City, where he is to appear Wednesday morning at 9 am in Municipal Court.  This arrest came in the context of a far right hate campaign targeting Jaggi, including a petition promoted by the notorious racist group La Meute, demanding his arrest; a campaign that has been taken up by right-leaning political figures and members of the media over the past week.

More specifically, the absurd charges relate to Jaggi’s participation in an antifascist demonstration in Quebec City on August 20 where he was briefly arrested. Close to a thousand people took to the streets that day to protest against an anti-immigrant demonstration organized by the far right group La Meute. Jaggi spent the entire demonstration talking on a megaphone, playing music, and dancing with children, in front of the police. At a certain point the police took him into custody, but then released him after just half an hour. At the time, he released a public statement on his arrest, which can be read here.

While he was the only person arrested that day, Jaggi was not the organizer of the August 20th demonstration and had no official leadership role during that demonstration.

Nonetheless, the far right in Quebec considers Jaggi to be the leader of a conspiracy of antifascists, the federal government, and nefarious global elites. On social media, fascists and conspiracy theorists share memes making him out to be a larger than life figure, a kind of local puppet master responsible for anything done by the far left in Montreal. As such, they blamed him for the August 20th demonstration, which saw La Meute humiliated inside a parking garage for hours, and for violent incidents which took place that day. An online petition demanding Jaggi be arrested and charged with various offenses was started by and disseminated by members of the far right, including members of La Meute, the Front Patriotique du Quebec, Storm Alliance, and the Mouvement Républicain du Québec, amongst others.

That the far right are scapegoating one person of color for all the opposition they encounter is not surprising. However, the situation was exacerbated within days of La Meute’s August 20th defeat, as Quebec City Mayor Regis Labeaume publicly blamed ‘Singh’s gang’, and was quoted in the media stating ‘I hate Jaggi Singh’, declaring him persona non grata in the provincial capital. The Journal de Montreal followed up with a hit piece entitled ‘Jaggi Singh Superstar’ by Richard Martineau, as former PQ Minister Bernard Drainville had Jaggi on his radio show and demanded that he condemn all of the violence that took place on the 20th, scoffing when Jaggi explained that he was simply one participant in the demonstration and not in a position to make any blanket condemnations.

This is the toxic context in which Jaggi was arrested this morning. Not for the first time, political figures, journalists, and the far right have collaborated in developing a narrative which has subsequently had serious consequences for people’s lives. This is a pattern that has played out repeatedly since the first racist ‘reasonable accommodation’ crisis, and has only intensified through social media, especially in the current context against refugees crossing into Canada. While Singh is only one person, in no way anyone’s leader, it is important to condemn this dynamic for the way in which it has been weaponized time and again against social movements and oppressed people here.

We are calling on progressive allies, antifascists, and those who care about civil liberties, to show support to Jaggi and all others targeted as a result of the August 20th demonstration, and by the far right more broadly. One way to do this is to be present to show your support at the Quebec City Municipal Courthouse tomorrow morning at 9am. Rides are being organized from Montreal.