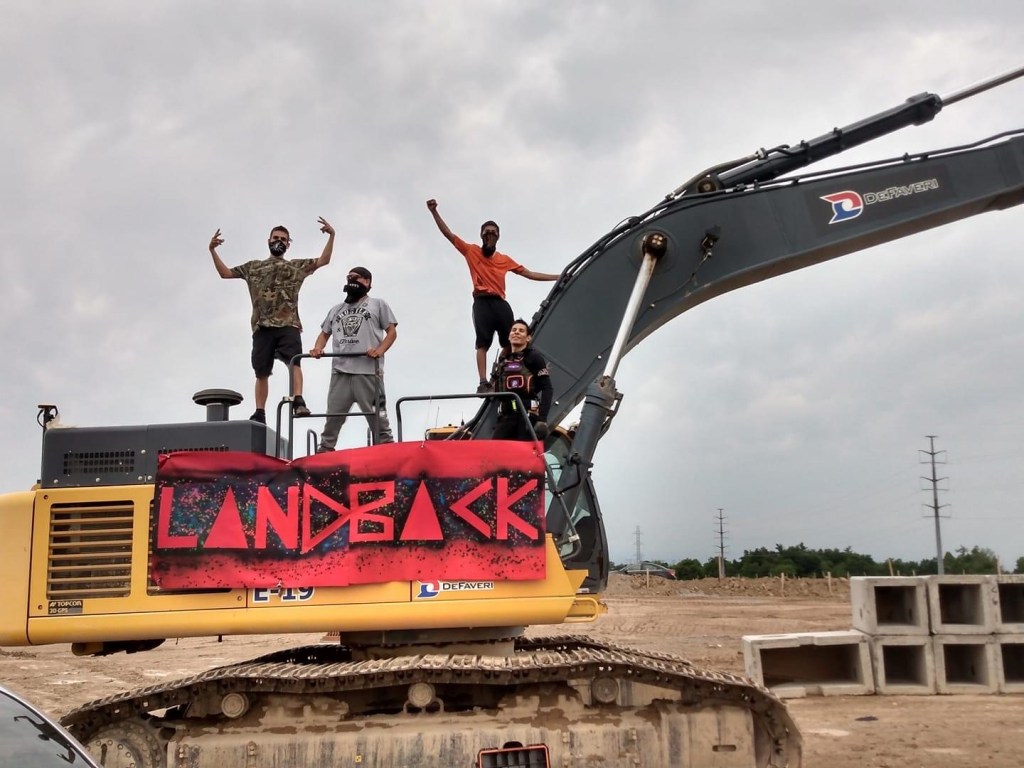 The McKenzie Meadows development in Six Nations has been stopped, and a #landback occupation has begun.

SIX NATIONS – Despite high winds and heavy rain, a group of Onkwehon:we land stewards began reclaiming the McKenzie Meadows development in Caledonia, Ontario on Sunday, July 20th. The land, at the corner of Fuller Drive and McKenzie Road on the edges of Caledonia is across the road from Kanonhstaton – “the protected place” – the site of a 2006 land reclamation that made international headlines.

If allowed to continue, the McKenzie Meadows development would see the building of 700 homes on a 108 acre parcel of contested lands.

This multi-national reclamation is occurring hot on the heels of the Highway 6 bypass shutdown, which were held in support of Mohawk Warriors in Tyendinaga who were raided by the OPP for standing in solidarity with the Wet’suwet’en.

The general sense of spirit at this site this evening speaks to the overwhelming urge to exercise the responsibility to take care of what little Onkwehon:we lands have been left undeveloped. A handful of community members were informed in April 2019 that the Six Nations Band Council (SNEC) had accepted an agreement on the previously dead deal for less than what was offered in 2013. The sum of $352,000 was funneled into the economic development trust fund and 42.85 acres are tied up in federal red tape awaiting a process to be added to the reserve land base. Those lands lie in limbo, similar to the Birch lands from 2006 and the Pines at Kanesatake from 1990.

The Six Nations Elected Band Council is a product of the Canadian government’s Indian Act and is directly accountable to the Minister of Indigenous Services Marc Miller. It was imposed on the Six Nations of the Grand River in 1924 by the RCMP. As a Federal Government entity the band council doesn’t hold any treaty rights, inherent rights, legitimate authority, over Onkwehon:we people to make decisions regarding their lands and rights.

2003 – Land purchased by 2036356 Ontario INC McKenzie Meadows development. Micheal Corrado and others are listed as owners.

2006 – Hundreds of Onkwehon:we people repulsed an OPP attack on land defenders who stopped the Douglas Creek Estates development from occurring on lands that became known as Kanonhstaton or “the protected place.” An occupation lasting years began, and Kanonhstaton became the flashpoint for many ongoing protests and actions.

2019: Six Nations of the Grand River says it has accepted an accommodation deal with a developer building two new housing projects in Caledonia. Ballantry Homes has given 42.85 acres of farmland and $352,000 to the Six Nations Elected Council as part of the accommodation deal to approve two housing projects: Beatties Estates and McKenzieMeadows on the east and west sides of McKenzie Road in Caledonia. The first part of the project in McKenzie Meadows is located directly across the street from the former Douglas Creek Estates site where the land reclamation in 2006 took place. A total of nearly 1400 homes are proposed to be built between the two projects.