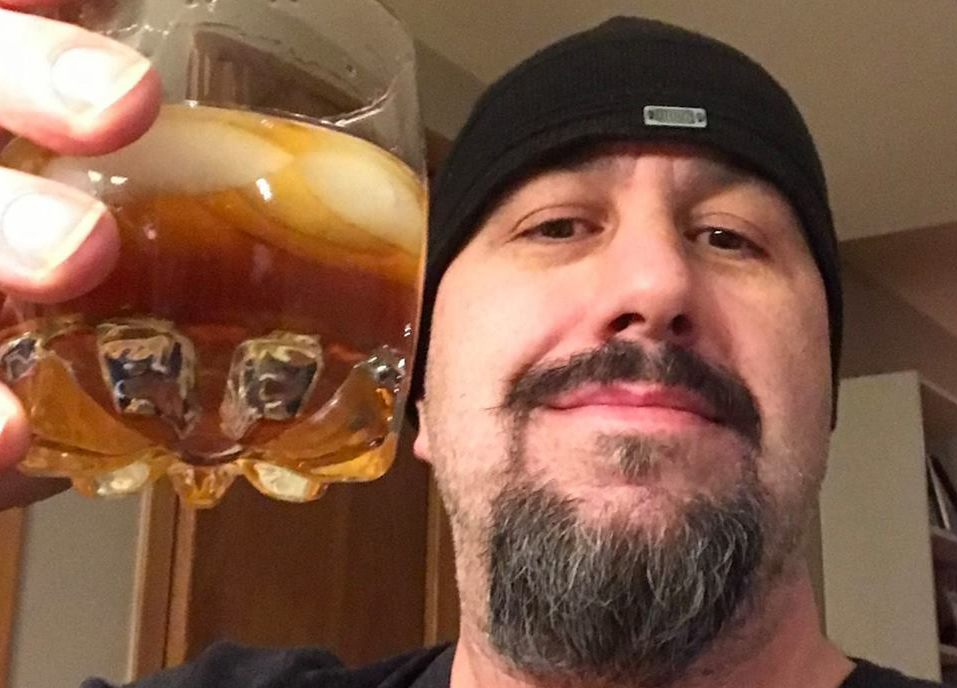 On Friday, March 15, 2019, less than 24 hours after the Islamophobic massacre in Christchurch, New Zealand, a Québec internet site published a French translation of the killer’s manifesto.

Why would someone be in such a rush to translate this document and amplify the killer’s message? This wasn’t a just some error that we can chalk up to a serious journalistic blunder: it was the intentional signal boosting of an Islamophobic manifesto. The translator’s online Islamophobia is extensive and well-documented.

Let’s not forget that what we’re talking about is a seventy-four-page document published by the killer as a part of a propaganda and public relations operation meant to explain why he did what he did, and that in it he pronounces his allegiance to fascism and calls on white supremacists the world over to imitate his actions.

So who was it that published the manifesto in French?

A tweet from Lesmanchettes.com encouraging people to read the Christchurch terrorist’s manifesto.

It appeared on the Les Manchettes website, a website that has existed since 2017 and that specializes in sharing and spinning fake news, conspiracy theories, and nationalist, conservative, and Islamophobic texts. Everything points to Les Manchettes being the work of one person, who maintains the site and signs most, if not all of the articles André Boies, who goes by the alias Bo Bois on Facebook. 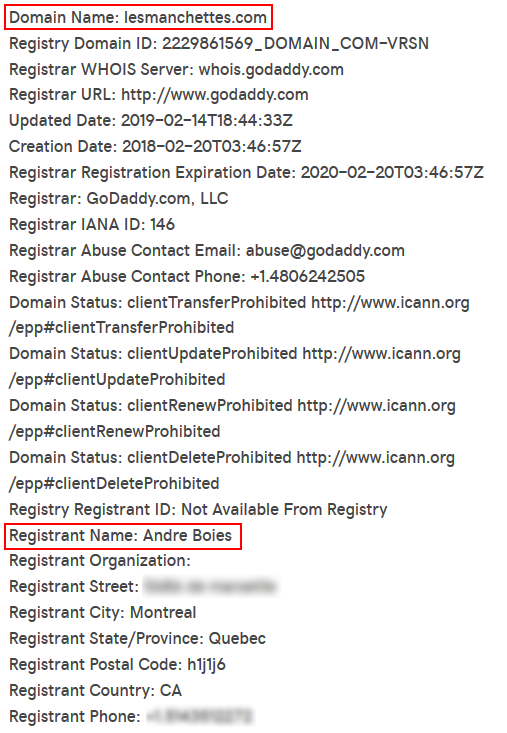 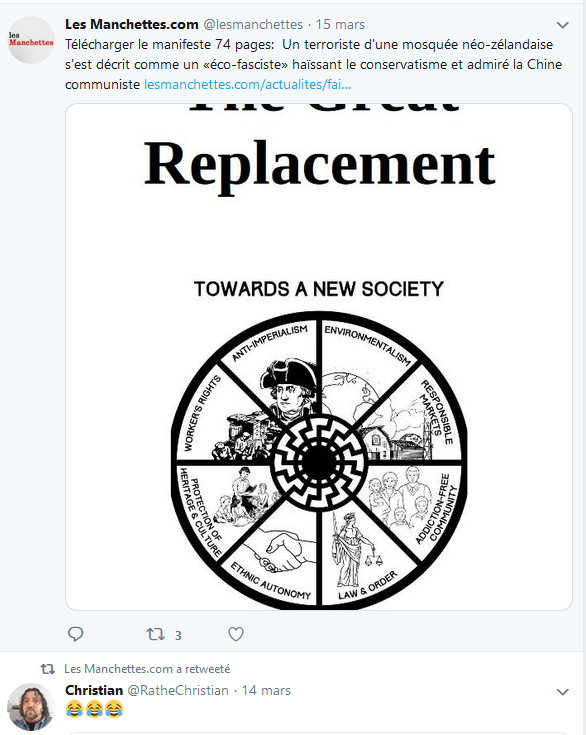 There is no doubt that Boies is the French translator of the manifesto and that he posted it. For one thing, he was quick to brag about it on Facebook:

André Boies admits to having translated the Christchurch terrorist’s manifesto to French.

If that weren’t enough evidence that he was the translator, Boies either did not know how or forgot to remove the metadata from the pdf of the document posted online, which identifies the owner of the software used in its production: 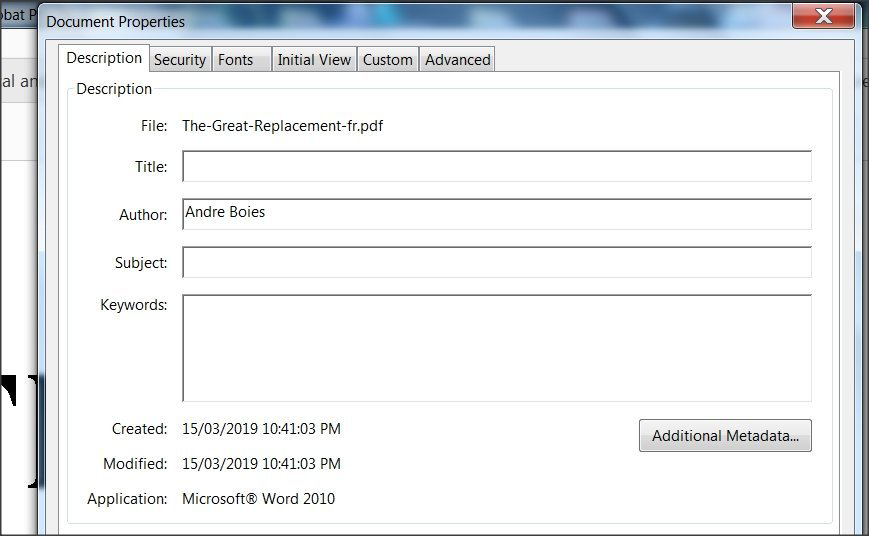 Metadata extracted from the pdf file of the Christchurch terrorist’s manifesto show “André Boies” as author.

In a discussion with some fellow Islamophobes, Boies says he made a copy of the video of the attack “au ka qu’on (le) censure” (sic) [in case it is censored]:

Who Is André Boies? 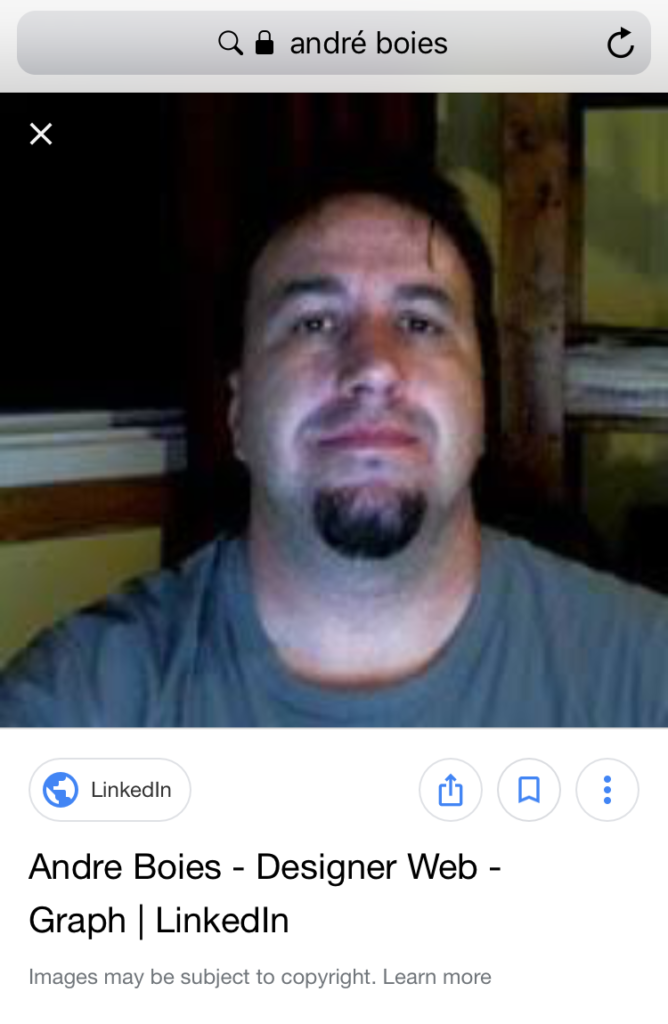 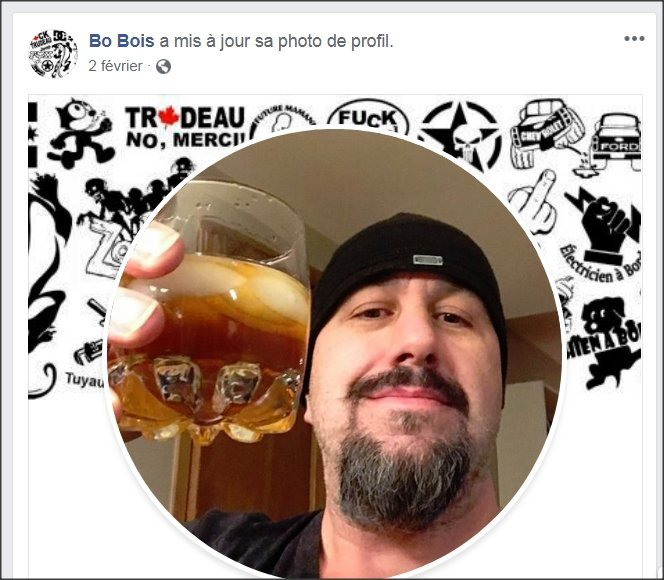 André Boies is a graphic designer who lives in Montréal. He is very active in Québec’s nationalist fascistic milieu on Facebook and Twitter and publishes at least one article a week on the Les Manchettes website. He owns a web design company called “Graphixab,” which is just one in a long list of ephemeral companies connected to him. He hopes to be of service to the Québec nationalist milieu, offering his skills to design stickers for far-right militants. 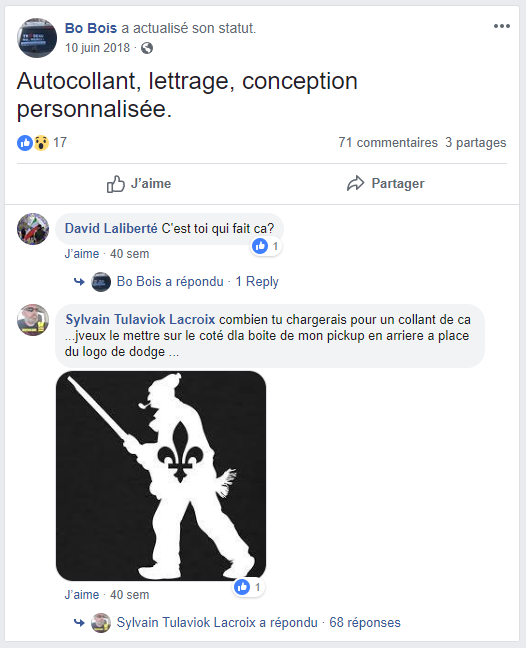 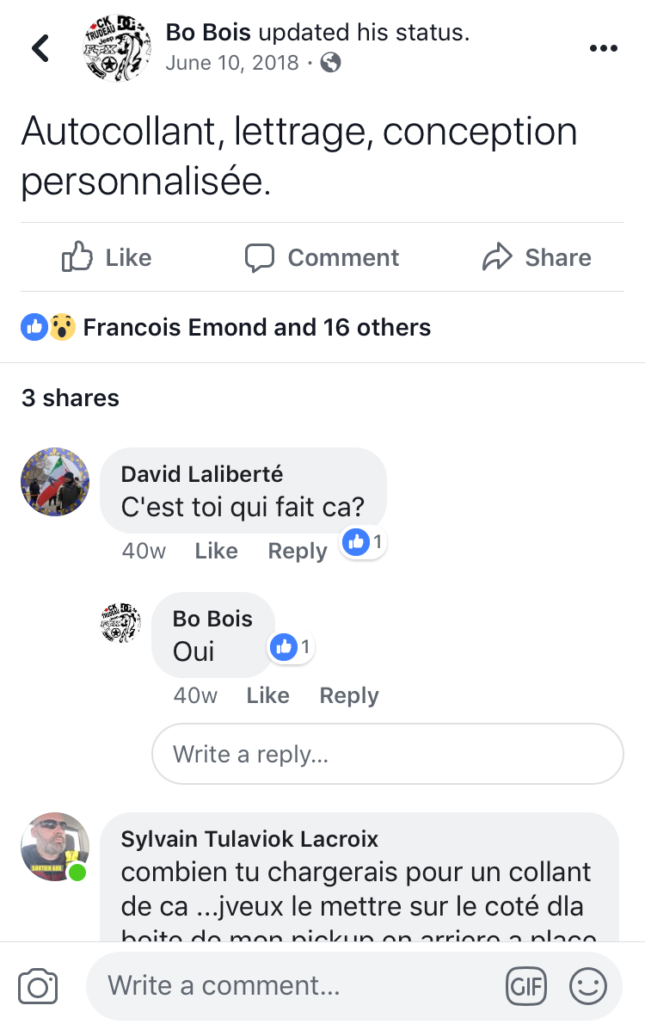 Boies, like most of the legion of goofs who make up the Québec far right, is obsessed with Islam, as he indicates in a number of ways, including in his online comments (Coudonc, tout le monde la [sic] dit que l’islam c’est de la grosse marde!) [Come on, everyone says that Islam is a pileof shit!]. He also uses his various company façades, including his “Sticker Deal” Twitter account, to advance conspiracy theories, e.g., that the action was a “false-flag attack”(Sondage: Pensez-vous que l’attentat survenu en Nouvelle-Zélande soit un possible false flag?) [Poll: Do you think that the New Zealand attack might have been a false flag?]. 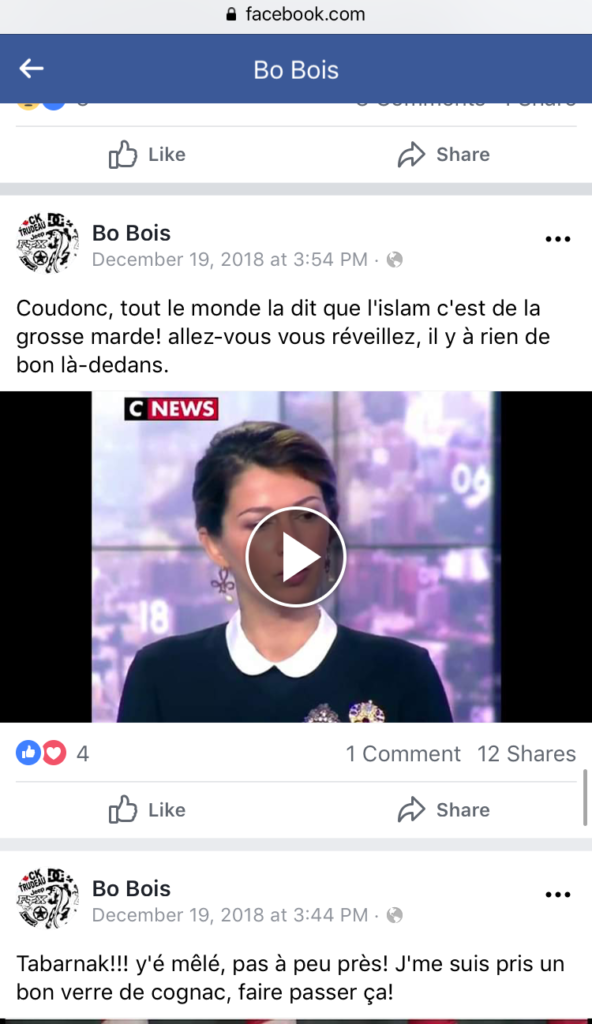 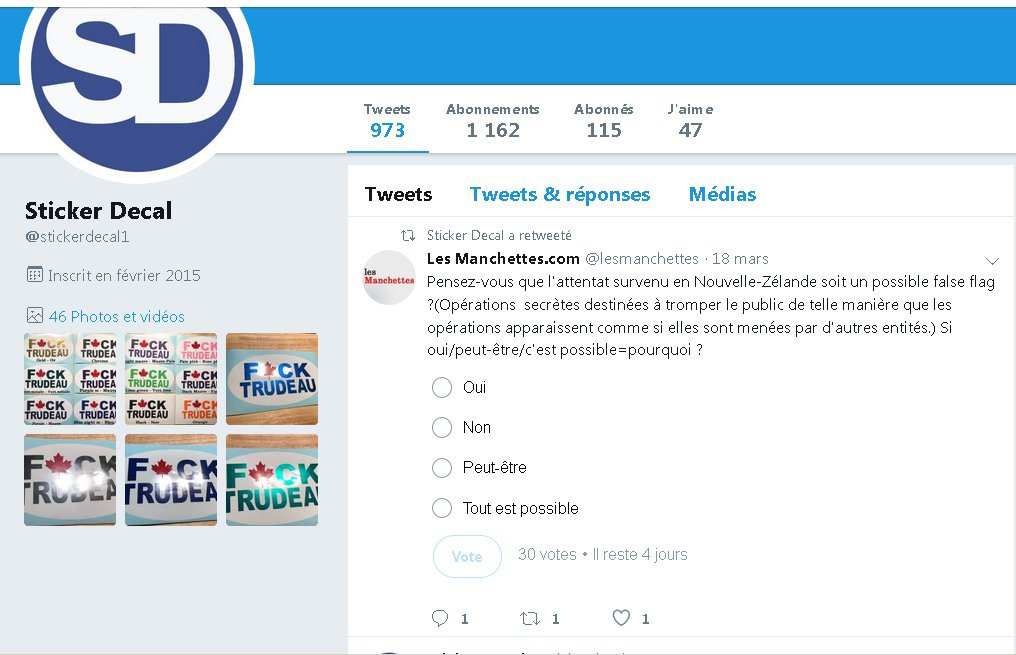 On line for only a few years now, his website includes dozens of bluntly and unrestrainedly Islamophobic articles of the kind that resonate with the vast majority of right-wing and far-right nationalist circles in Québec, and which are becoming increasingly normalized in Western society. Boies also uses his website to advance absolutely absurd and slanderous conspiracy theories, such as the idea that halal certification in Canada is used to finance terrorism! One only has to make a summary Google search to realize how obsessed he is with Islam and Muslims. 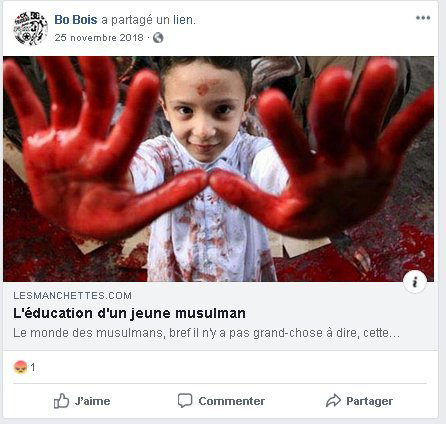 An example of the Islamophobic headlines found on André Boies’ website.

Here is a sample of his Islamophobic and xenophobic posts (including a graph supporting the “great replacement” theory, which is at the core of the Christchurch killer’s manifesto): 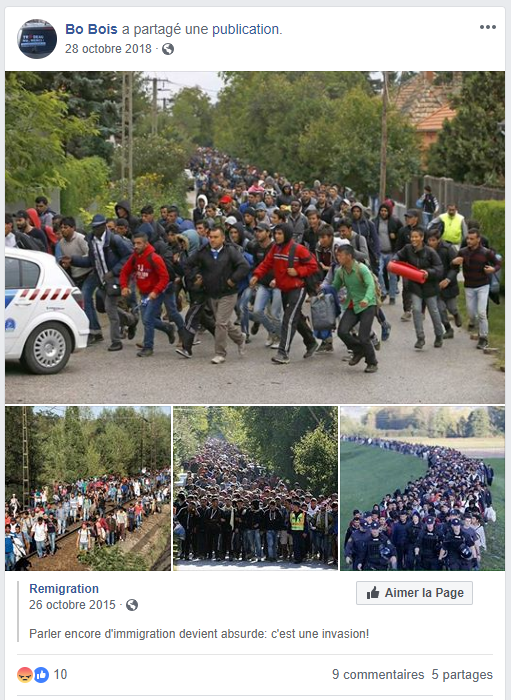 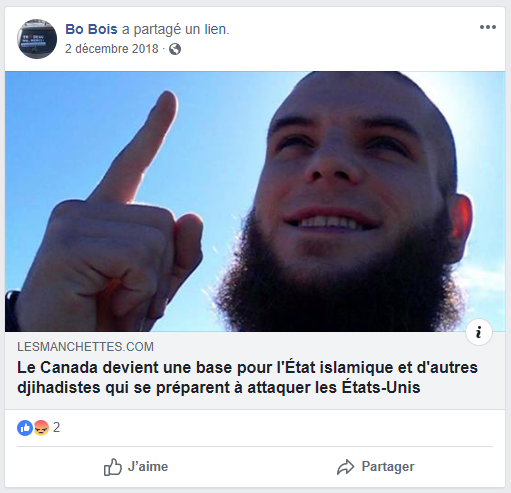 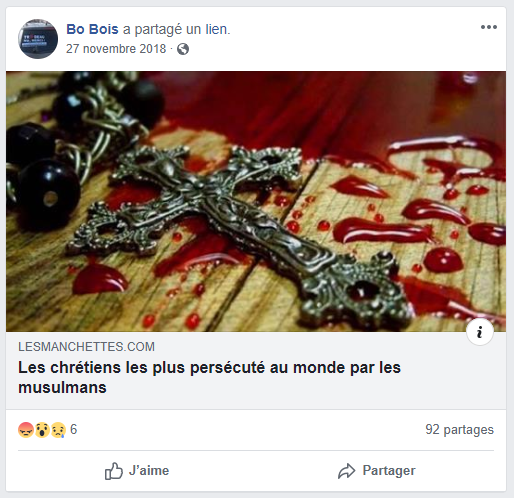 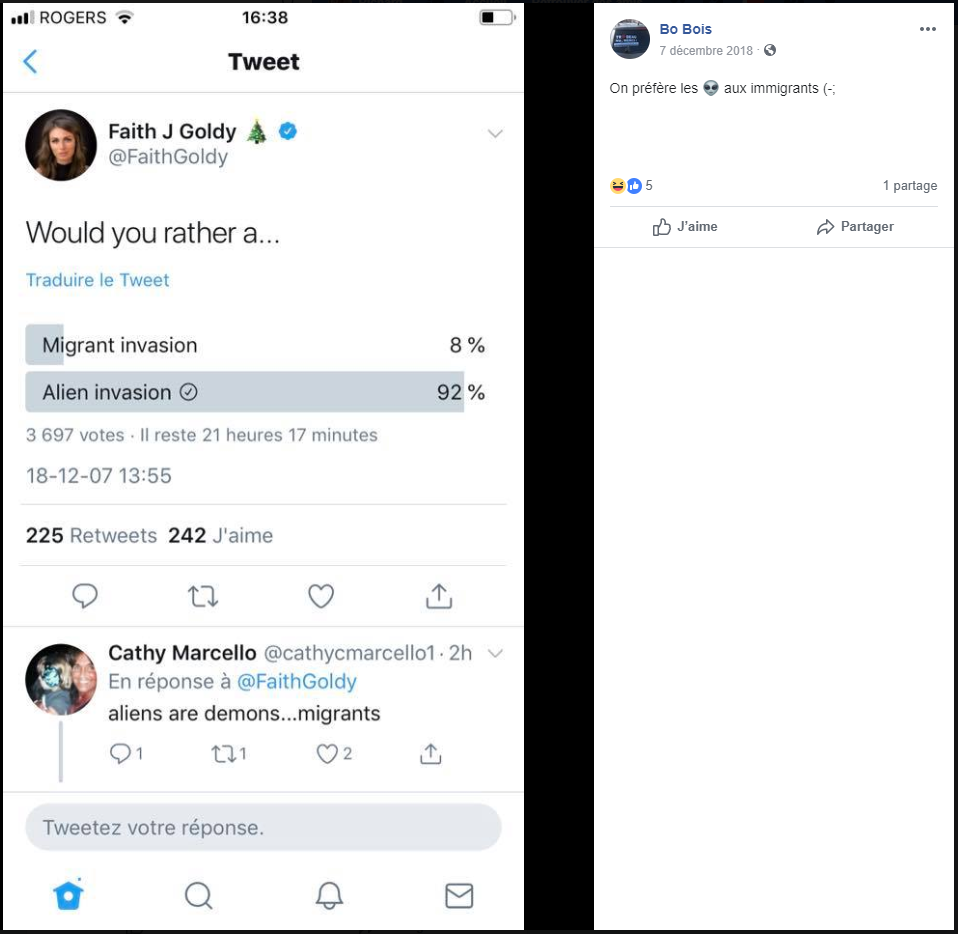 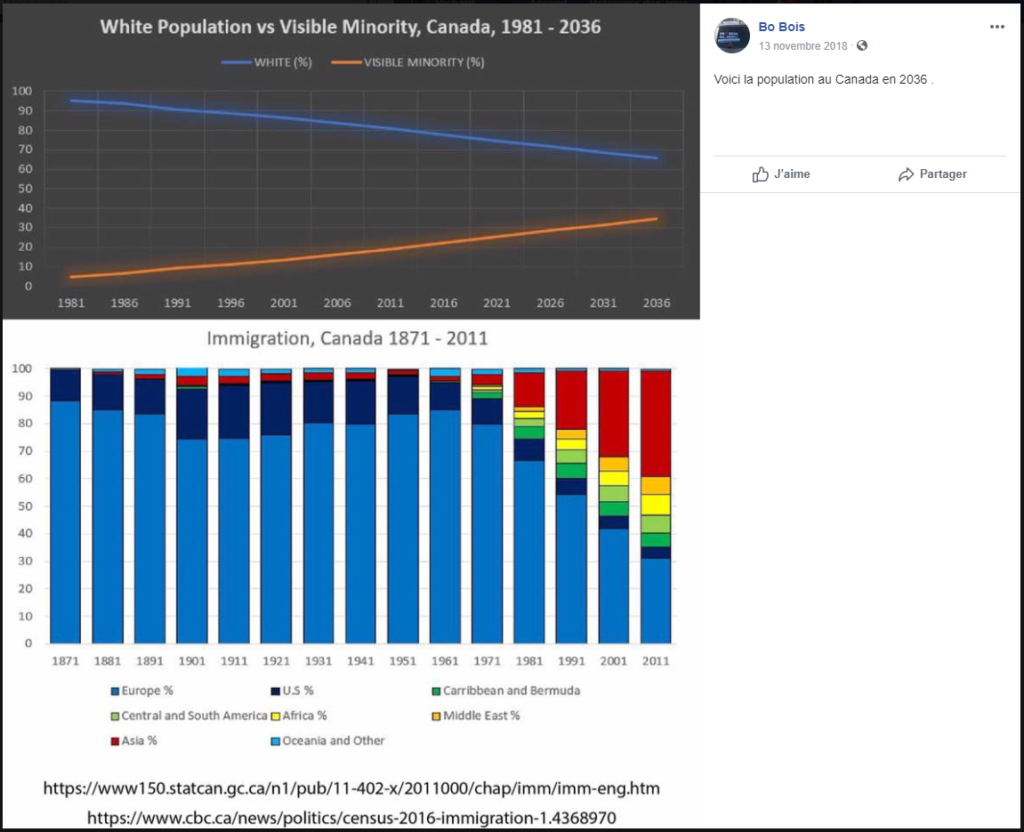 Boies’ tumultuous criminal history shows that he is no stranger to slander! He even had a pissing contest with the SQ in 2012 about which of them was the worst of slanderer. This obviously wound him up, because it remains an obsession of his even today…

André Boies is concerned with slander.

A Québecois de souche who even the Parti Québécois finds embarrassing

Boies is clearly part of the hard core “patriot” movement of the variety that finds La Meute insufficiently radical and too federalist. In the summer and autumn of 2018, when internal splits within the far-right were multiplying and an election was forthcoming, Boies decided to campaign aggressively for the PQ. 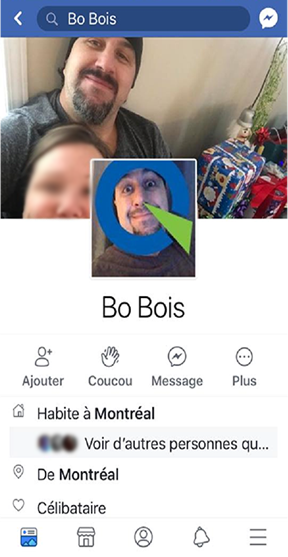 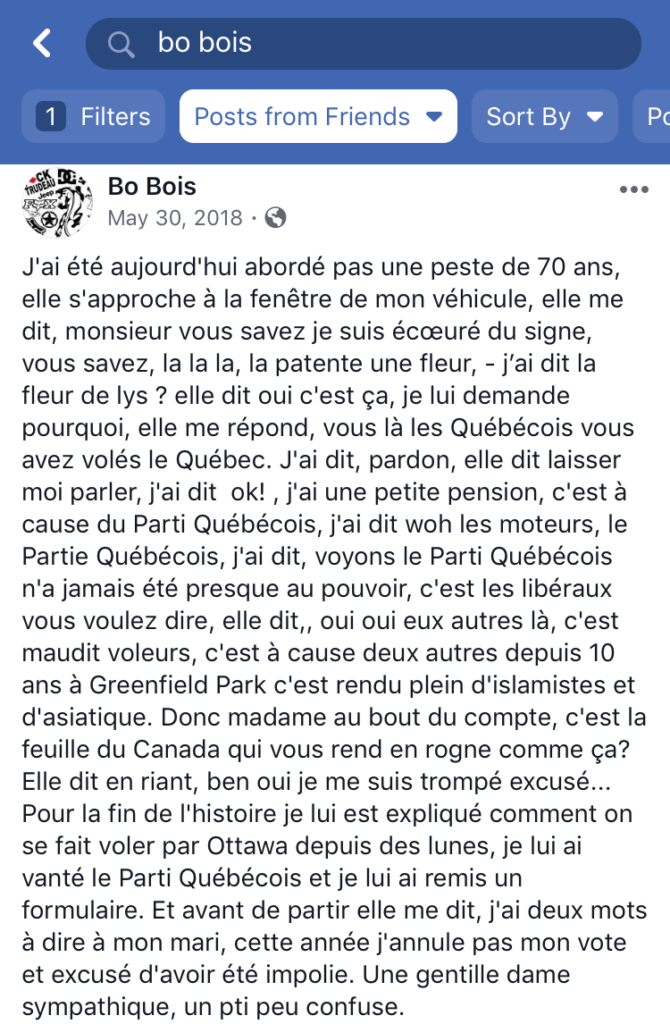 André Boies campaigns for the PQ…

He was even pathetic enough to cover his car with PQ themed stickers when he went to intimidate Québec Solidaire volunteers in Rosemont! (VICE documented his humiliation when, in August 2018, the Parti Québécois demanded that he remove their logo and party colors from his car.) 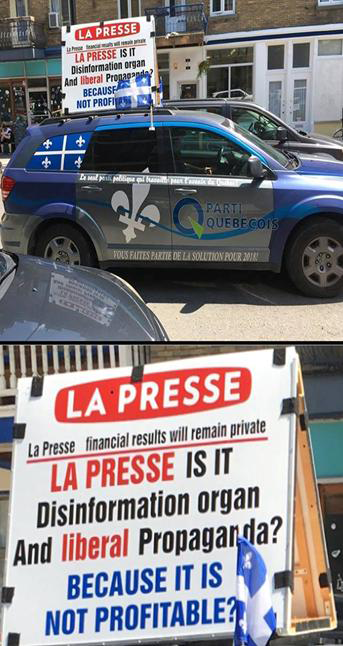 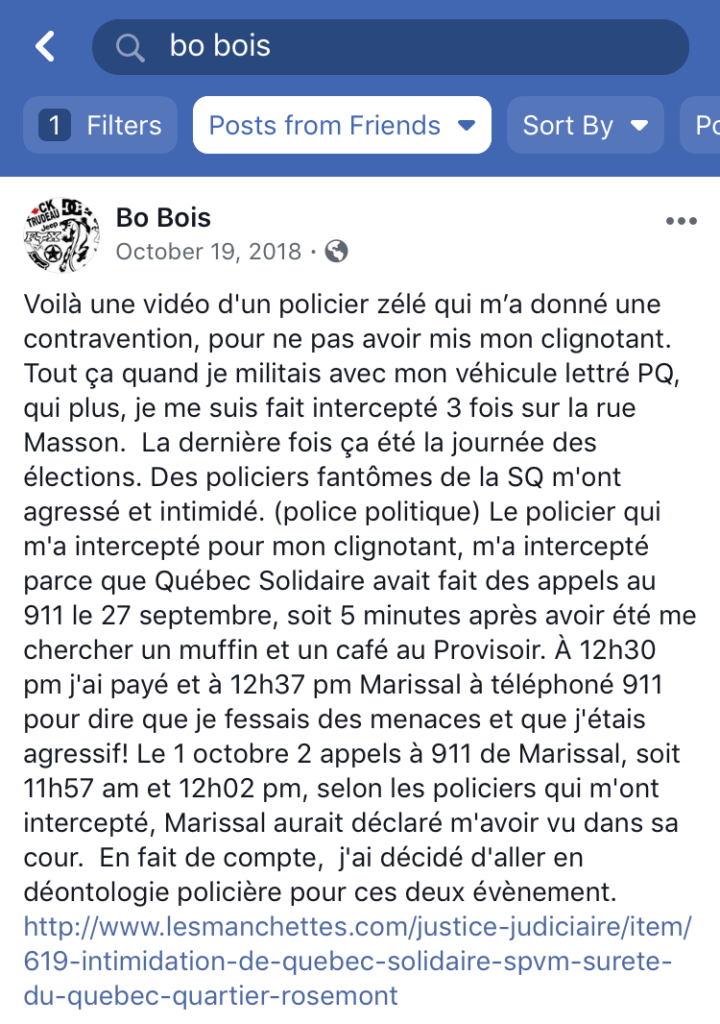 André Boies recounts his encounter with police after he allegedly harassed people around a private Québec Solidaire event in Rosemont.

Why would he publish the killer’s manifesto?

Boies may claim to have translated and published the manifesto for purely journalistic reasons, but any professional or specialist in information technology will tell you that a signal boosting gesture of this sort is ethically challenged in the extreme and doubtless motivated by other concerns. 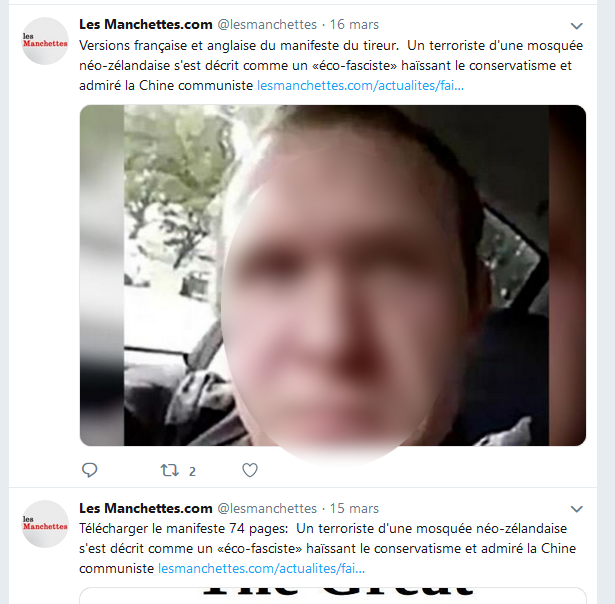 From our point of view, publishing this manifesto in French is more than a simple error in judgement. Given Boies’s Islamophobic history, we can be forgiven for thinking that his incentive was a desire to spread as broadly as possible the killer’s message and his motivations for a terrorist act that cost the lives of fifty members of Muslim communities in New Zeland.

It is also no coincidence that on the day after the action André Boies was seen sniffing around the (phoney) Islamophobic Yellow Vests outside of TVA, across the street from a gathering honoring the victims of the massacre. He obviously wasn’t there to join either gathering, because he only stayed at a distance for a few minutes taking photos of the antiracist and antifascist militants. He published an article the same day bemoaning the waste of public resources that this solidarity gathering led to. 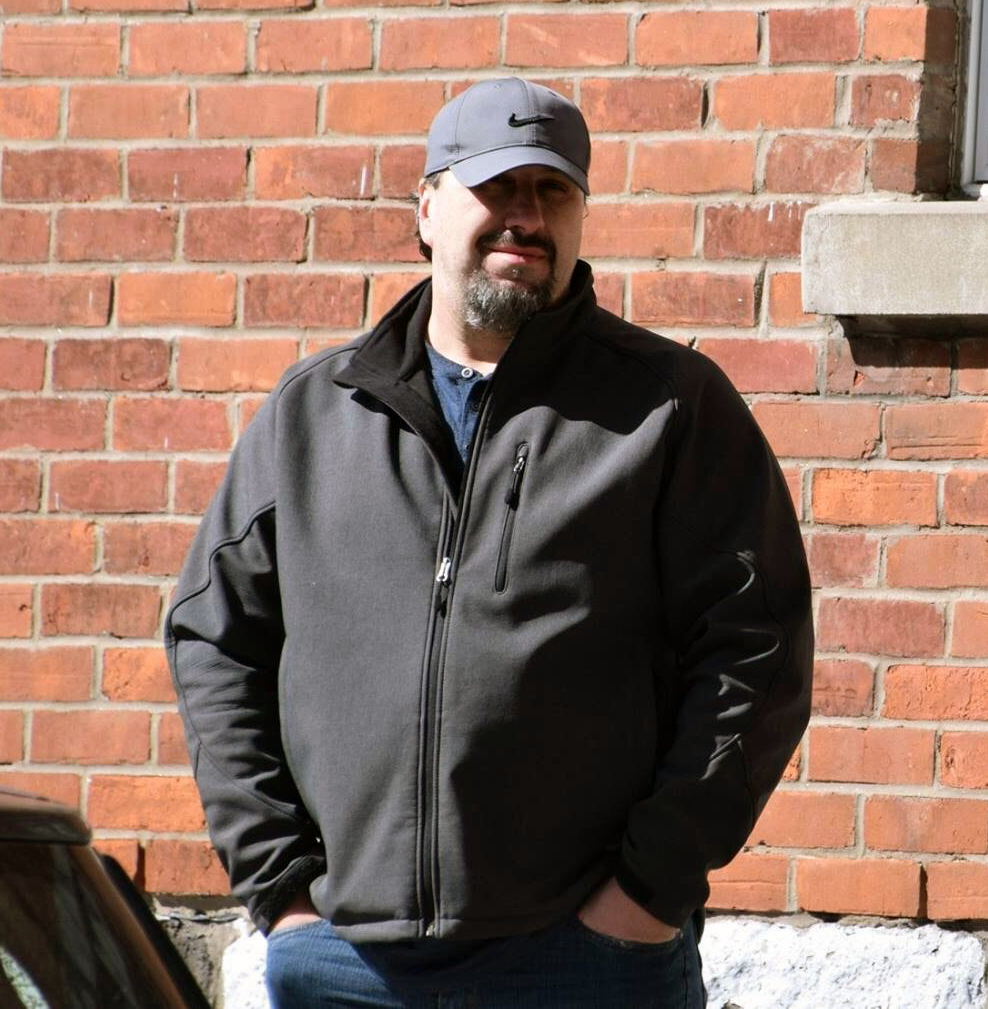 A call for vigilance and for action against Islamophobia

At this point, Islamophobia has been so trivialized in Québec that on the day fifty people were massacred a far-right nationalist militant could rapidly translate —albeit poorly— and diffuse a terrorist manifesto on social media platforms without a single comment in the mainstream media or, for that matter, without anyone denouncing it. (At the same time, in Ontario, the authorities “launched an investigation” of a notorious neo-Nazi who posted the manifesto on his website and of another who published a list of proposed targets for lone wolf attacks.)

It’s about time that we collectively address the depth of the problem with Islamophobia in Québec and Canadian society and that antiracist forces combine their efforts to counter by any means necessary the increasing normalization of hate and intolerance, particularly against Muslim communities.

One of the simplest things we can do that is to identify and denounce those like André Boies who actively promote Islamophobia. 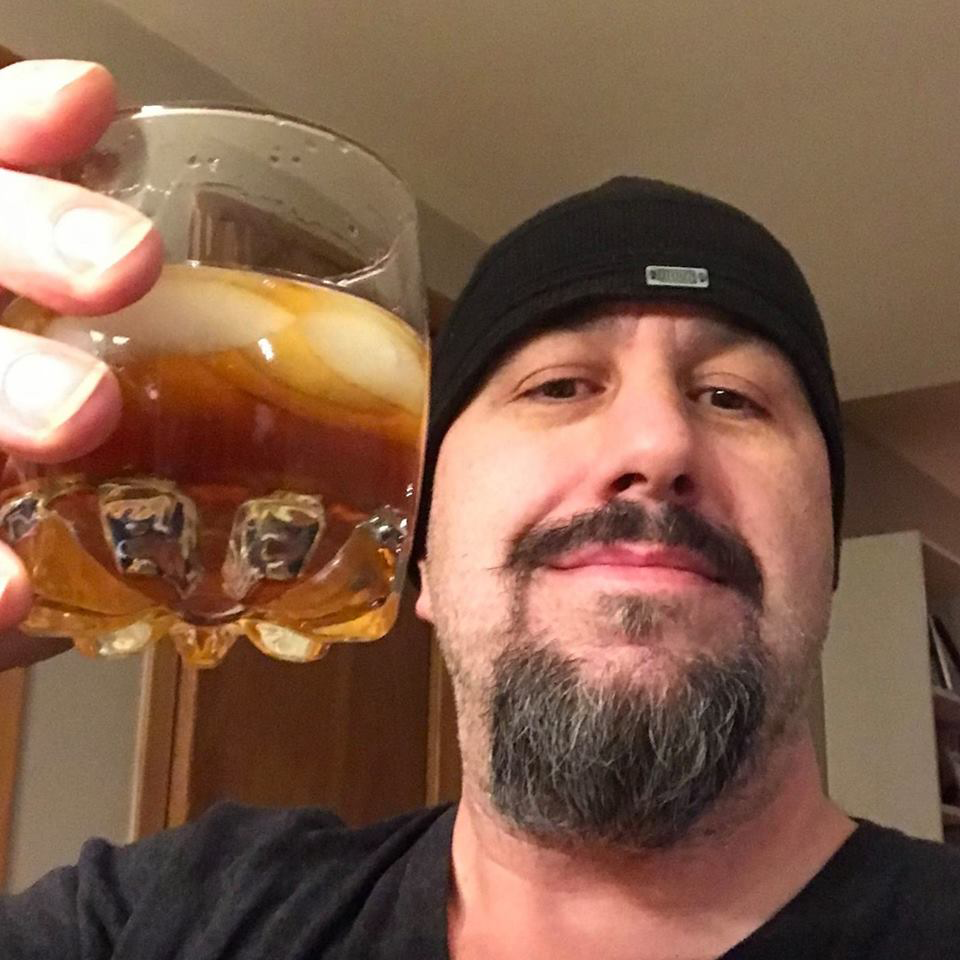 P.-S. Boies also came sniffing around the Manifestation contre le racisme et la Xénophobie, in Montréal, Sunday March 24. He was baffled when antifascists called him by name and asked him to leave stat. He even wrote an article about the encounter for his site… 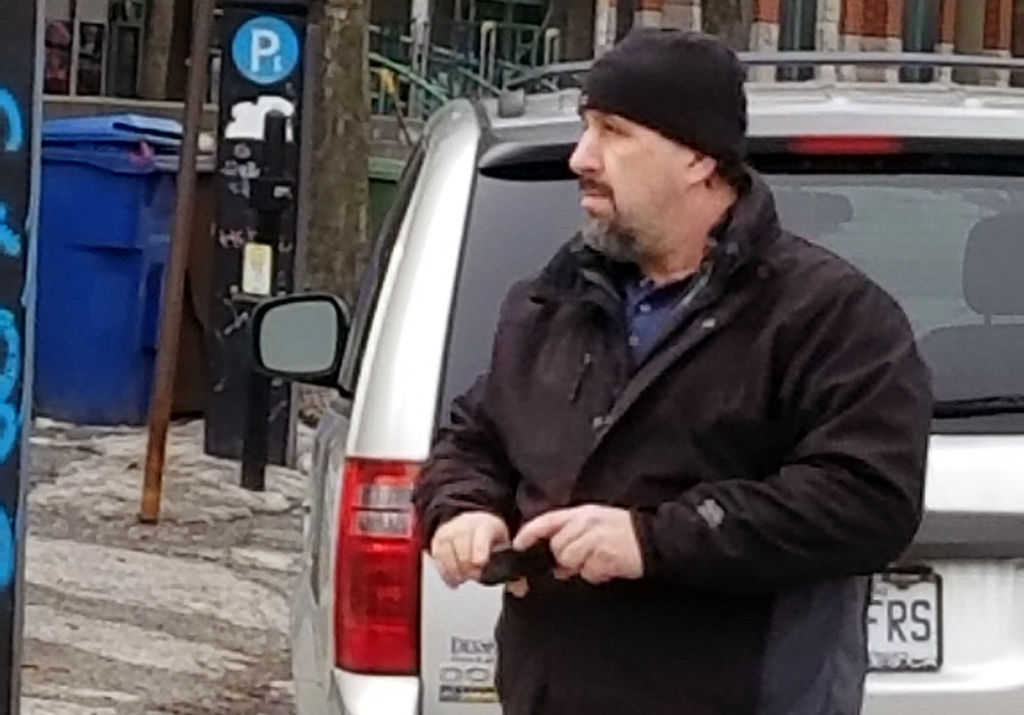 Thanks, André. Now you’ll know that we’ve highlighted your name in our little book of scumbags to keep an eye out for.