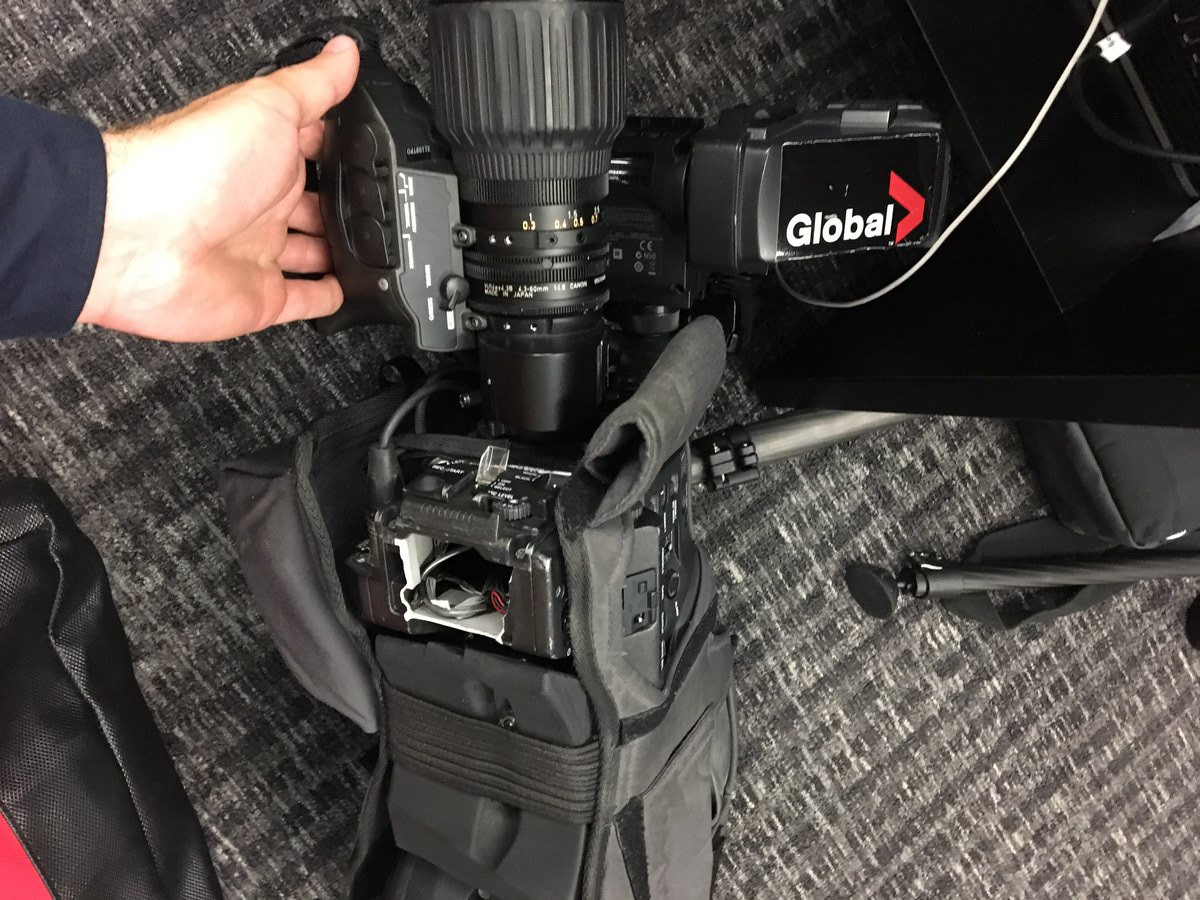 During the anti-fascist mobilization against the racist far-right in Quebec city on Sunday, a Global News camera was destroyed by black bloc participants [1. Unfamiliar with the black bloc tactic? See ‘What is a black bloc?‘]. Afterwards, an anti-racist in the crowd was overheard asking his friend “I understand attacking the fascists, and even the police who protect them, but journalists?”

We’d like to offer an explanation for why this happened, and why it will continue to be a necessity in demonstrations where people will be breaking the law.

Sometimes, it is necessary to go against what the mainstream considers “acceptable”, to break the law in order to do the ethical thing. Those who mask up to fight the racist far-right have decided, at great personal risk, that they will use any means necessary to shut down fascist organizing. Many of us believe that the entire system needs to be abolished, that the laws are oppressive, or that those who make the laws are responsible for a serious and urgent problem; whether that’s the destruction of our planet, the hundreds of thousands of home foreclosures, murders carried out by police with impunity, etc.

Every photograph that is taken of people wearing masks or doing illegal actions becomes evidence that can be used for repression. Police routinely use footage from demonstrations found on social and independent media to criminally charge people and put them in cages. To make demonstrations safer for those who are already putting themselves at great risk, we need to make our demonstrations camera-free zones (at least in the sections of the demonstration with masked participants).

First off, discourage people from filming or taking pictures during a protest, and explain how it is harmful. Often, people take pictures without thinking, and later get themselves or their friends in trouble. Other people who are filming are corporate journalists or “good citizens” who later hand over the information to the cops.

Trusted movement media is an exception to the ‘camera-free zone’, as they have built trust with participants in the black bloc by consistently blurring masked faces, and not filming any criminalized actions.

Corporate media, on the other hand, exist to propagate and reaffirm a capitalist worldview, and regularly hand over their footage to police without even waiting for a court order. On Sunday in Quebec City, a CTV journalist was told not to film people with masks, to which he replied that he had every right to (which, according to the State’s laws, he indeed does). When he was given a final warning that if he continued his camera would be smashed, he walked over to the police to point us out, and later ripped off the mask of a comrade (which he paid for with a sore face the next day).

The corporate media has always furthered the interests of the class that provides its funding. Anyone who has ever been subjected to their coverage knows it’s biased. The strategy of positive mass media attention is extremely short-sighted – these institutions will never be our allies, as long as we want to challenge power structures in a meaningful way. Any message we try to communicate through corporate media will always be reframed in order to keep liberalism intact.

Those who decide that we need to fight back are already up against fascist thugs and the weaponized police who protect them – we don’t need yet another enemy putting our safety at risk. Although corporate media can be told not to film people in masks, they’ll often continue to sneakily film from a distance, because they have no respect for our struggles. Last Sunday, several antifascists came equipped with water-guns full of black paint to spray in the faces of fascists. Using similar tactics to blind the lenses of corporate media cameras, or even plain-old spray paint, will come in handy in the future.

Demonstrations need to be participatory. If everyone has a camera in their hands, they become another alienated spectator. People go out into the streets to change the world precisely because they’re sick of watching it on TV, and watching how the powerful are constantly changing it for the worse. Street demonstrations need to be spaces of participation, creation, and destruction, not stages for the media and traps for police surveillance.

The Quebec police have announced that they will be making future arrests based on video surveillance. Although we don’t want to bolster paranoia, because maybe this is an empty threat, it serves as an opportunity to remember some helpful pointers for wearing masks.

Why wear a mask? It allows us to take action without fear of immediate identification. The more people are masked, the harder it is for the authorities to isolate or identify a part of the crowd. You can wear a mask to protect your identity, or simply to protest against constant surveillance. Developing a practice of masking at demonstrations opens up space for participation in actions for people who would otherwise be risking legal status, immigration status, or employment. It is best to go with friends who can watch your back, to be aware of where the police are, and to be mindful of your surroundings so you can pick the best moment to mask up and unmask.

Don’t be casual about taking off your mask or partially opening up your disguise. Decide wisely when to go into anonymous mode and when (and where) to come out of it. Don’t go halfway. If the cops can find a picture of you with the exact same clothes and shoes, with a mask and without, all your careful disguising will be wasted.

Even if we get away, the police may use photos or video to charge us later. It’s best to cover your hair, face, arms, tattoos, and hands. Make sure that there are no identifying features on your clothes, shoes, or backpack. It’s a good idea to change several pieces of your outer clothing or even your shoes (for instance, bring a light jumper, track pants, or a rain poncho you can throw away). Don’t forget to cover, disguise, or ditch whatever backpack or bag you may bring. Shoes can be covered with black socks. Cloth gloves are best because they don’t transfer fingerprints, unlike plastic gloves. If we bring any materials with us, let’s wipe them down beforehand with rubbing alcohol to remove fingerprints. And most importantly, be sure that when you are masking or unmasking, you are not being filmed!

To read more about safety in a confrontational protest, see the How-to page at MTL Counter-information.

Further reading on anarchists and the media

Caught in the Web of Deception: Anarchists and the Media
“Cops, Pigs, Journalists”: To Inform, To Obey
The Reasons for a Hostility – About the Mass Media