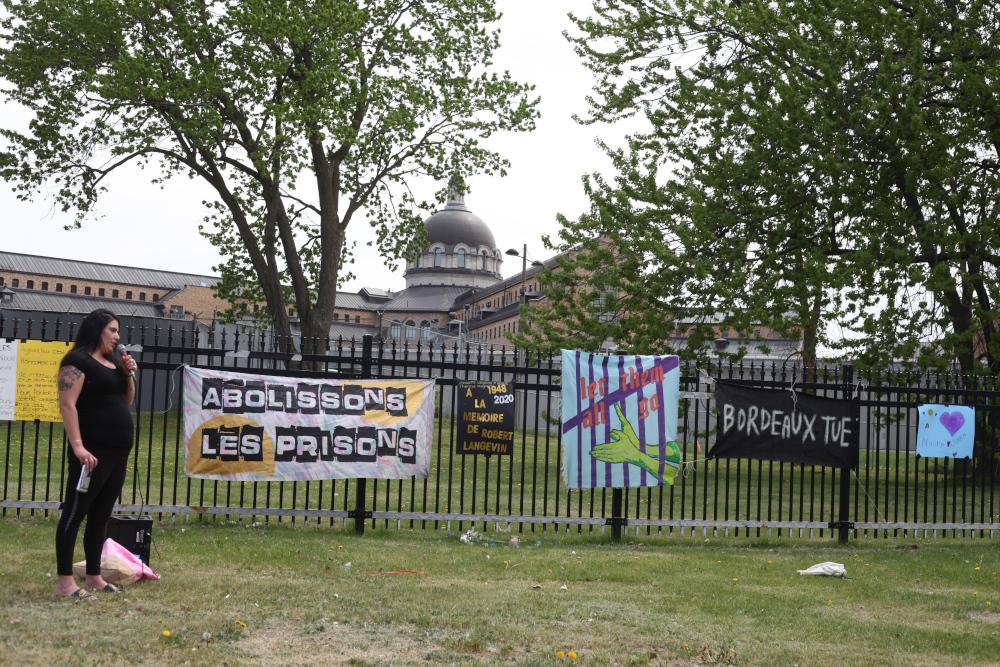 From the Anti-Carceral Group

24 May, Montreal – At 2pm today, a caravan of over 30 vehicles visited the Bordeaux jail in Montreal, creating a memorial for the deceased prisoner, Robert Langevin, and calling for immediate and significant actions to keep prisoners and communities safe. The memorial included a message from Mr. Langevin’s sisters, while the vehicles, decorated with slogans such as “Prisons Kill” and “Free All Prisoners,” honked their horns, made noise, and held banners in solidarity with those inside.

Robert Langevin, a 72 year-old prisoner at Bordeaux, died of COVID-19 on the night of May 19 to 20. Deeply ill, Mr. Langevin had repeatedly asked for help from prison staff and filed a complaint with the provincial ombudsperson on March 27th. His sisters, Therèse and Pierette Langevin, sent a message to the participants, which was written on posters and attached to the fence surrounding the Bordeaux prison.

“Dear Robert,” the message said, “It’s with a heavy heart that we say to you: goodbye my brother, you were always a fighter, always there for the world. Today, it’s the world that is there for you. They heard you cry. They want to tell you they’re there for you and to denounce the present injustice across the prison walls. You aren’t alone. We’re here. We love you.”

While honoring Mr. Langevin, the participants also called on the Quebec government to take immediate and significant steps to keep prisoners and communities safe. Jean-Louis Nguyen was one of five participants who have loved ones in Bordeaux. “At the same time that we honour the life of Mr. Langevin, we are here to remind the public that there are still prisoners in difficulty, isolated, sick, without health care and cut off from their family,” said Nguyen. “We need at all costs to prevent another tragedy like the one that took away Mr. Langevin.”

Ted Rutland, a member of the Anti-Carceral Group, said the Quebec Ministry of Public Security needs to release prisoners to enable social distancing. “Quebec’s major response to the COVID-19 crisis in its prisons has been to lock prisoners in their cells 24 hours a day. There are prisoners at Bordeaux who have been locked in their cells for 30 days now, with little contact with the outside. This is literally torture,” said Rutland.

Rutland noted that provinces such as Ontario, Manitoba, Saskatchewan, Albert, and Nova Scotia have released 25-45% of their prison population to protect prisoners and communities from COVID-19. Quebec, in contrast, has identified only a small category of prisons for potential release. The latest figures suggest that only 29 provincial prisoners have been released through this measure, and lawyers say that prisoners who fit the category continue to be denied early release.

Participants also highlighted the mistreatment of prisoners at Bordeaux. One woman whose husband is incarcerated has not been able to contact him for two weeks, and she worries for his safety. The woman, who prefers not to be named, led participants in chants of “Solidarity” and “You are not forgotten.” Prisoners inside yelled back, and a back and forth continued for half an hour.

Catherine Lizotte, who tried to help Robert Langevin, believes the event achieved its objective. “I want people to know that we’re thinking about them, that we love them,” she said. “And we will continue to fight for their release.”

The crowd left after an hour, just as four SPVM cars arrived to observe. One police car, in violation of the SPVM’s disciplinary code, played the Akon song “Locked Up” on the car’s loudspeaker.

Photos from the event are available at https://bit.ly/2TBMTaV