This is a month to think about the prison industrial complex as a method of repression and social control. The idea is to make public education and awareness of this oppressive, patriarchal, colonialist, racist and capitalist method. While trying to collectively reflect on how it should be in a libertarian world and anti-oppression.

It is important to note that we are an independent group, autonomous, and that under no circumstances we leave aside this autonomy whether to receive grants or create collaborations. We are all activists from diverse backgrounds coming together in this project with a common goal: to reflect on the prison in an abolitionist and libertarian perspective. We are former political prisoners, close to (ex) political prisoners and comrades in solidarity. We wish to launch a reflection in activist circles (particularly in the French-speaking environment) because we consider that it is a too little-discussed topic but a very very important one, especially with the context of post-G20 judiciarization and the student strike of 2012.

Relating to the proposed activities, they aim to reflect on the issue of prisons as a method of repression and social control. The idea is to make public education and awareness of this oppressive, patriarchal, colonialist, racist and classist method used by the state to control the people, while trying to collectively reflect on possible alternatives from the perspective of freedom, anti-oppression and equality. The idea is to do activities between January 8 and February 8, 2015, to issue two activities weekday evenings and during the weekends. The month would end with a final full day of activities and panels. 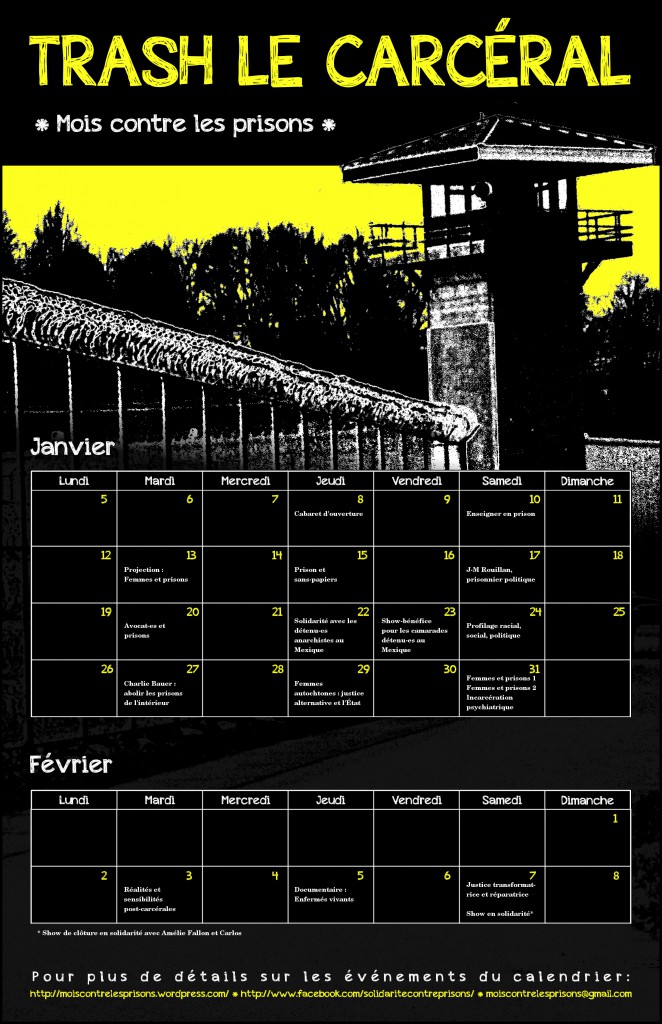