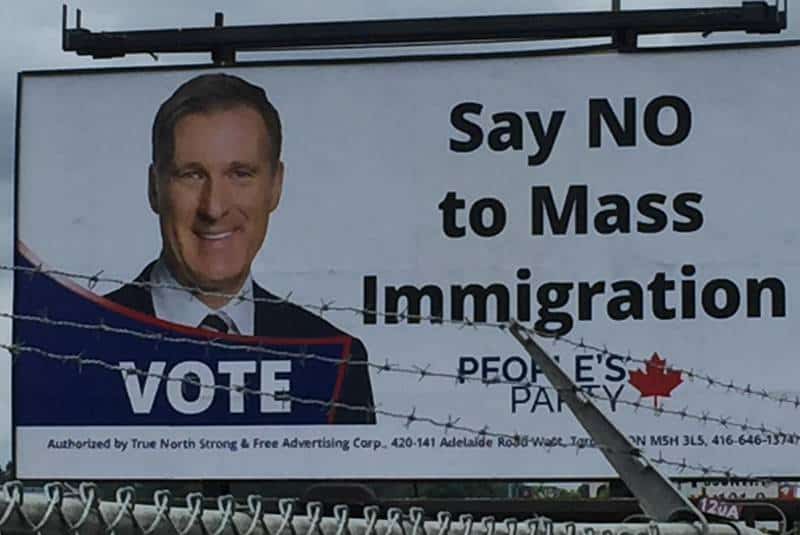 Voting is not really our thing, but we do recognize that this is a time when more people are speaking about politics and policies, including many that will have a real impact on many people’s lives. This time around (not for the first time) the Conservatives are contending with a national party to their right, as Maxime Bernier’s People’s Party of Canada fields candidates across the country on a populist platform with climate denial and anti-immigrant sentiment as its key planks.

Maxime Bernier was a federal cabinet minister from 2006-7 and 2011-15 in Stephen Harper’s Conservative Party government. He ran for the Conservative Party leadership in the 2017 leadership election, and came in a close second with over 49% of the vote in the 13th round, after leading the eventual winner, Andrew Scheer, in the first 12 rounds. In August 2018, Bernier resigned from the Conservative Party to create the People’s Party of Canada. The PPC quickly latched onto fears about immigration and immigrants as key issues, alongside support for pipelines and various climate denial conspiracy theories. Indeed, while climate denial is perhaps the most prominent right-wing theme we found on Quebec PPC candidates’ social media accounts, race and racism are what have repeatedly made headlines for Bernier’s populists.

The PPC is part of a (tried and true, worldwide) phenomenon of right-wing splinter parties emerging from the main right-wing party, opening up space on that party’s right. This was done most successfully in Canada by Preston Manning’s Reform Party in the 1990s. The Reform Party emerged to the right of Brian Mulroney’s “mainstream” Progressive Conservatives in 1987 and was so successful that it displaced the PCs before re-joining them in 2000. Like the PPC today, Reform attracted widespread support from right-wing Canadians, most of whom were disaffected Tories, but also a smattering of neo-Nazis and far rightists who jumped on the bandwagon before being eventually expelled. Reform ended up absorbing the rump PC party, and rebranded itself as the “new” more right-wing Conservative Party under Stephen Harper. This in turn provided Bernier with a home for his own political career, from which the PPC has now emerged. In other words, the PPC is part of a dynamic of a section of Canadian voters pushing to the right that has been going on for decades. In a certain sense: nothing new; however, we must keep in mind that both the global and national contexts today are far more favourable to the far right, and it is not for nothing than many Bernier supporters compare his “outsider” campaign to that of Donald Trump.

While the PPC is not even close to being a Nazi or fascist party, even as he ran for Conservative leadership in 2017, Bernier was being singled out by some Canadian neo-Nazis as a potential “maverick” who could help to shake things up in their favour, much as Trump had done in the United States. They weren’t wrong – since founding the PPC, Bernier had adopted a strategy of using racist dogwhistles to try to consolidate support from the most reactionary white Canadian voters. As such, the party has become a pole of attraction for numerous far rightists hoping to either build political power or (for the more far-sighted) to move the frame of debate further to the right. Collecting selfies alongside Bernier had become a pastime for a slice of Canadian reactionaries even before media reports about neo-nazis like Alex Brisson from Huntingdon, Paul Fromm of Ontario, and members of the Northern Guard in Alberta, as well as with members of the Proud Boys, all posing with “Mad Max”.

There have been suggestions (for instance made by B’nai B’rith Canada) that Martin Masse, PPC spokesperson and architect of its public relations strategy, has been key to its embrace of the far right. Masse was owner and publisher of Québécois Libre, an online libertarian news outlet that shut down in 2016. That the PPC’s cozy relationship with racists is primarily due to the influence of one person is highly doubtful, however – rather, the PPC is positioning itself as the option-of-choice for those who find the Conservatives insufficiently right-wing.

Racism is clearly one of the most effective tools for such a strategy, witness PPC billboards and tweets against “mass immigration” and also “against antifa,” or Bernier’s diatribe about “radical Islam” being “the biggest threat to freedom, peace and security in the world today.” “The other parties are complacent and pander to Islamists,” Bernier accused, promising that “The PPC will make no compromise with this totalitarian ideology.” Bernier’s platform calls for a massive reduction in immigration to Canada, down to between 100,000 and 150,000 new immigrants per year, and almost doubling the number of “economic migrants”. He also wants the government to cut off all funding for official multiculturalism, to leave the United Nations Global Compact for Migration and to prioritize refugees who, among other things, “reject political Islam.”(About all this, one might want to check out this article in Politico magazine, that has observed that attitudes towards immigrants have become a key factor in determining which political party Canadians support.)

Such a strategy involves a balancing act. To succeed, Bernier and the PPC have to play to the crowd with lines that the far right will recognize and embrace, all the while not making themselves appear beyond the pale. Perhaps that is why Bernier was a no-show at last year’s December protest in Ottawa against the United Nations Compact on Migration. Organized by the anti-Muslim group ACT for Canada, Bernier was scheduled to speak alongside members of La Meute, Rasmus Paludan of the Danish far-right Stram Kurs political party, and Travis Patron of the (actually white nationalist) Canadian Nationalist Party, before he backed out at the last minute.

A number of media articles have revealed the far-right connections of people active in the PPC as organizers and members whose signatures were used for the PPC to attain official party status. For instance:

Unsurprisingly, a number of PPC candidates have made headlines as their social media posts past and present have come to light:

These stories are misleading, though, in that they suggest that the PPC has a few bad apples in it, whereas really the whole party is rife with such sentiments. One gauge of this, and a sign that it is intentional, is those candidates who have left (or been kicked out) when it became clear that there would be no condemnation of the far right from the upper ranks:

Indeed, a cursory examination of the Facebook pages of PPC candidates reveals that what is really noteworthy is how selective news stories about racist tweets or FB posts have been. Almost every single PPC candidate in Quebec has recently (and repeatedly) shared articles from climate denialist sources, including many with a clearly conspiratorial bent. Mark Sibthorpe, candidate for Papineau, even produced his own YouTube “exposé” revealing how George Soros is behind an international globalist conspiracy to crash economies and make money by spreading panic about climate change. Secondary to climate denial, fears about threats to “free speech” and about “mass immigration” are both recurring themes for Quebec’s PPC candidates, and roughly one in five have recently shared articles from what we would term “national populist” or far-right sources, including LesManchettes.com, the website of André Boies (the French-language translator of the Christchurch killer’s “Great Replacement” manifesto, associated with Montreal’s Yellow Vests), André Pitre’s far-right “Stu Dio” YouTube channel, and a more eclectic and sporadic mix, including Faith Goldy, Alexis Cossette Trudel, Black Pigeon Speaks, the Yellow Vests, and the highly racist “Voice of Europe”.

Still, PPC candidates are not all cut from the same cloth – for some, this is their first foray into politics, whereas others have been around for a while. For instance, Ken Pereira, the whistleblower from the 2013 Charbonneau Commission, was slated to run for the PPC as one of its Quebec candidates, until he had to withdraw his candidacy in early September following his son’s arrest for murder. Pereira produces videos on André Pitre’s YouTube channel, alleging all manner of far-fetched conspiracies, including those relating to QAnon, described by Vice as “a wild theory that an individual who goes by ‘Q’ is leaking information detailing a massive secret war Trump is waging against the ‘deep state’ and an international cabal of pedophiles—and calling the 9/11 terror attacks a ‘false flag.’”

Similarly, Raymond Ayas, who writes for the Postmillenial and is active in the Catholic far right in Quebec, is running as PPC candidate for Ahuntsic-Cartierville. As spokesperson for the Association des parents catholiques du Québec, in 2017 Ayas was reported in the media defending a talk by Jean-Claude Dupuis of the Société-St Pie X and a former leader of the Cercle Jeune Nation and Marion Sigaut (close to Alain Soral in France). It might be noted that members of Atalante were reported to have been on hand at the talk to provide security.

The PPC will be lucky to win more than a couple of ridings in Canada, and may simply fizzle and die. Or it may consolidate a bloc of voters to the right of the Conservatives, making the framework of political debate in Canada even more hostile to racialised people, Indigenous people, Muslims, and immigrants. Either way, the racists and reactionaries who have gravitated around the PPC are unlikely to just go away, and some may be around for years to come; if for nothing else, that makes them worth taking a look at, and keeping an eye on.