While the yearly anticapitalist demonstration was in full swing in Old-Montréal, vandals had a field day in Hochelaga-Maisonneuve, Montréal.

Around 6:30pm, suspects tried to arson the rental business of cars and trucks Jean Légaré, at 3035 rue Hochelaga (note: well-known to rent to police during demonstrations).

The police confirm that at least one incendiary device was thrown against one of the windows of the building, which did not break however.

No suspect was arrested in relation to this event.

Several hours later, at the end of the evening, suspects vandalized the façade of several condos and businesses of the place Valois with yellow paint.

Situated at the intersection of rues Valois and Ontario, the place Valoisl was launched in 2007, and includes first-floor businesses, condos on the upper floors, and a large public square.

The storekeeper’s in the area are of the opinion that these disgraceful acts are directly tied to the anticapitalist demonstration which took place several hours earlier downtown.

“We know it, the condos are often targeted as well as several businesses in the place Valois offering expensive products, luxurious, said a storekeeper. There are those who see the space as a symbol of capitalism in the neighborhood”.

Accounts confrimed having seen three suspects take flight after having papered the walls with paint.

As of yet, no arrests have been made by police. 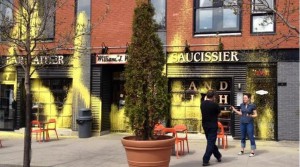