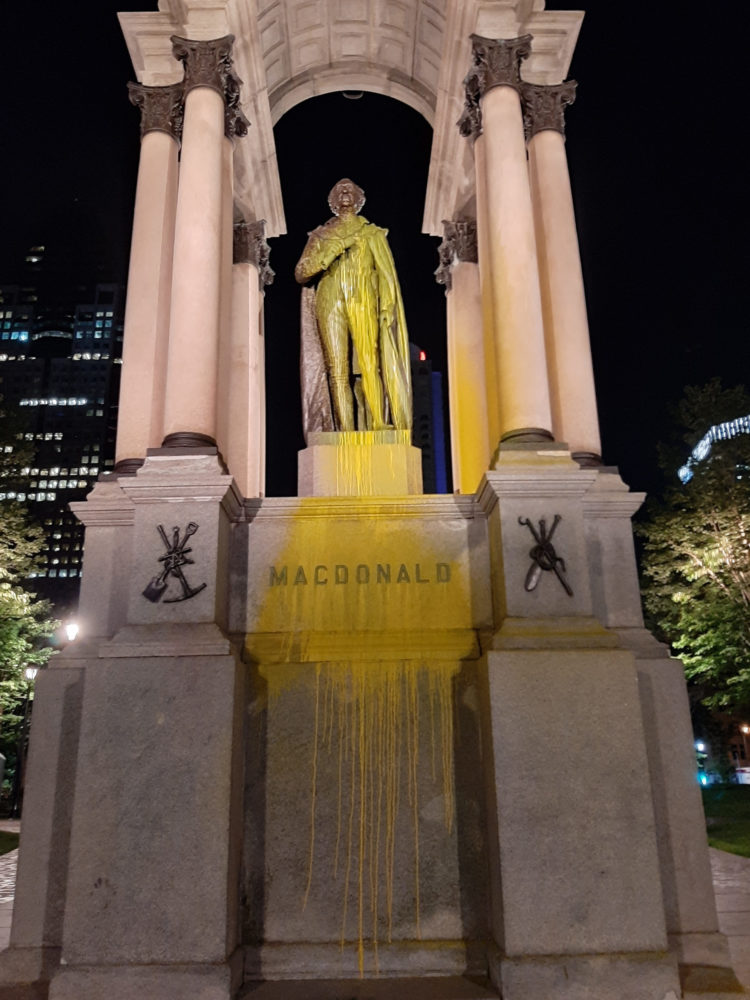 Montreal, July 2, 2020 — As part of #CancelCanadaDay actions throughout the Canadian state, the #MacdonaldMustFall group in Montreal has once again vandalized the Macdonald Monument in Montreal, this time in yellow paint.

According to Roy G. Biv of #MacdonaldMustFall in Montreal: “This statue should either remain vandalized with paint, and we can declare a truce, or better yet, it should be taken down. Taking down a statue celebrating a racist person does not erase history, it is part of the ongoing struggle to resist racism and to properly contextualize our collective past.”

The #MacdonaldMustFall group in Montreal has explained its objections to celebrating John A. Macdonald previously as follows: John A. Macdonald was a white supremacist. He directly contributed to the genocide of Indigenous peoples with the creation of the brutal residential schools system, as well as other measures meant to destroy native cultures and traditions. He was racist and hostile towards non-white minority groups in Canada, openly promoting the preservation of a so-called “Aryan” Canada. He passed laws to exclude people of Chinese origin. He was responsible for the hanging of Métis martyr Louis Riel.

The Macdonald Monument has been vandalized so much in the past three years, that all main colours of the spectrum have been used to attack the monument: red, orange, yellow, green, blue, indigo, and violet.

Selected photos and communiqués from previous attacks on the Macdonald Monument in Montreal: