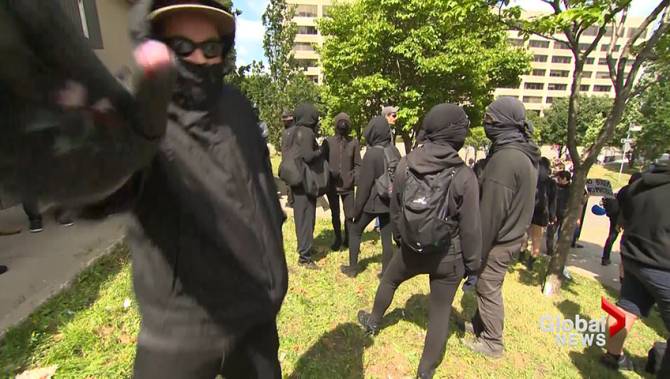 MTL Counter-info sent some questions to some people involved in ongoing anti-fascist activities, in an effort to address common misconceptions about these struggles. This is what they had to say.

Can you tell me about antifascist organizing in Montreal and what it’s role is, especially now?

Antifascist activism has a long history in Montreal, going back to the 1980s. Prior to 2017, though, things had been relatively quiet for a number of years, most activity not occurring in the public eye.

Following the racist massacre in Quebec City on January 27, the far right has been emboldened. They have been taking to the streets and organizing in an unprecedented fashion. As a result of which, many of us have begun organizing along explicitly antifascist lines.

The role of antifascism is to expose and neutralize the threat posed by the far right. It is to support communities and individuals targeted by the far right. Ultimately, it is to join with and support those fighting against the root causes of the far right, which in the Canadian context are racism, patriarchy, colonialism, and capitalism.

Why is it important to be fighting fascism now?

Since six people were murdered and nineteen seriously injured by a racist gunman in Quebec City earlier this year, the far right has stepped out of the shadows and is trying to gain legitimacy as a political force in Quebec society. This is part of a broader trend that reached a milestone when Donald Trump was elected, and that we see playing out throughout the historically racist countries in Europe and North America, as the economic crisis is provoking an avalanche of white racism.

The thing is, the answers the fascists provide — scapegoating immigrants, Jews, people of color — simply divert attention away from the real cause of the problems people are facing, namely an unfair economic system and increasing austerity.

History shows that if we don’t fight effectively against the far right, people end up dying. The stakes are high, and we don’t intend to sit idly by as things get worse.

What are common misconceptions of Antifa?

The politically ignorant believe we are the reason behind the rise of the far right. A quick look at what happened first should set the record straight on that one.

The far right believes we are secretly paid by George Soros or by the government. While most people will find this ludicrous, it lines up with how they have always explained things, i.e. shadowy forces or some foreign Jewish millionaire being behind anything they don’t like.

People on the left sometimes believe that we are just into violence, or that bashing nazis is all we care about. This is another misconception, as in fact we’re often people who are also involved in less sensational work against government cutbacks, police brutality, racism, and other aspects of life under capitalism.

Many people are confused, and think there is some organization called “antifa”. In fact, “antifa” is just the media buzzword of the day, a German contraction of the word “antifascist”. Since the election of Donald Trump, there has been a proliferation of antifascist groups across North America; this is a good thing, but for better or for worse there is no unitary organization or even single network encompassing all of these groups, or even any one single ideology we all agree upon. This is a mass movement, and like all mass movements, it can’t be reduced to just one entity.

Another point of confusion worth noting, is why some of us wear masks at demonstrations. This is not a uniform, it’s a simple precaution, both against arrest and against retaliation from our opponents. Not all antifascists wear masks, and not everyone who wears a mask identifies primarily as an antifascist.

What threat do you see in the anti-immigrant groups which appear to be gaining steam in Quebec (and elsewhere)?

These groups pose a threat, but we need to be clear: they only exist in any significant numbers because for years “mainstream” politicians and media personalities have been laying the groundwork for their racist rabblerousing. It is no coincidence that La Meute was founded by men who had been sent by the government to wage war in Afghanistan. It is no coincidence that this organization has grown to be so large in the province where an Islamophobic “Charter of Values” was proposed by the government and almost became law. These groups do not come out of nowhere, and taking them seriously requires taking the broader context into account.

Far right organizations create political space for racist and exclusionary ideas throughout the political spectrum. By comparison, the racism of mainstream politicians suddenly seems “moderate”. All the while, within their midst, they act like incubation chambers for more extreme individuals and groups.

On a basic and concrete human level, the costs can be high. Six people had their lives stolen from them in Quebec City in January; what message is being sent when hundreds of members of La Meute take to the streets less than seven months later? Refugees at the Olympic Stadium are being subjected to intimidation by the neo-nazi group Atalante. People cross the border are having to face the possibility that two-bit outfits like the Storm Alliance will be there to bully them as they do. All of these are examples of the violence that we are fighting against.

What is your role in countering them, specifically in Montreal and the province of Quebec?

We intend to expose and neutralize this threat. We will document and reveal the ties between organizations, including the links they would rather be kept out of the public eye. For instance, the neo-nazi Shawn Beauvais-MacDonald, who was an official in La Meute who attended the resent hatefest in Charlottesville. Or the involvement of racists behind the fake news scandal about Muslims at a popular zoo a couple of months back. Or the avowed white supremacists who were behind the attempted anti-refugee protest at the Olympic Stadium that people stopped on August 6.

On the ground, when racists attempt to act, we aim to be physically present to do whatever needs to be done to stop them.

If you’d like to learn more about what we are doing, we encourage you to keep tuned to the Montreal Counter-information and Montreal Antifasciste websites.

What do you think of the demonstration in Quebec city on August 20, and the mainstream media narrative that counter protestor’s actions could have an adverse affect on the cause?

La Meute’s march in Quebec City was the largest far right demonstration to have occurred in Canada since the 1930s. Let that sink in.

Our job was to prevent La Meute from taking to the streets. They hid behind police in a garage all day long, and waited until we had left to quickly march around the block. Obviously, next time we’ll have to stick around longer.

As for the actions everyone is complaining about: In a large and chaotic confrontation it is always difficult to know the context behind every photograph or soundbyte. That said, random people minding their own business were not attacked. If somebody showed up hoping to attend a racist demonstration, to us that is the real scandal. And as to media who complain about how they were treated, the solution might be to listen when someone tells you politely to not take their photo.

What are your views on the use of force?

Systemic racism is violent. Transphobia, homophobia and sexism are violent. Centuries of colonialism are violent, as attested to by the recent murders of two Inuit women in Montreal, not to mention living conditions for Indigenous people across Canada. The situation of people on welfare or getting by with nothing but an old age pension to live on are violent. But in all these cases this violence remains invisible to those who are not subjected to it on a daily basis.

For La Meute to march through the streets of Quebec City, for the Storm Alliance to intimidate refugees at the border, for Atalante to drop their pathetic banners … all of this is violent to those made to feel unsafe and insecure. The anti-Muslim hatefest that accompanied the PQ’s proposed racist Charter in 2013 was violent. And let’s not forget the horrific and heartbreaking context of January 27.