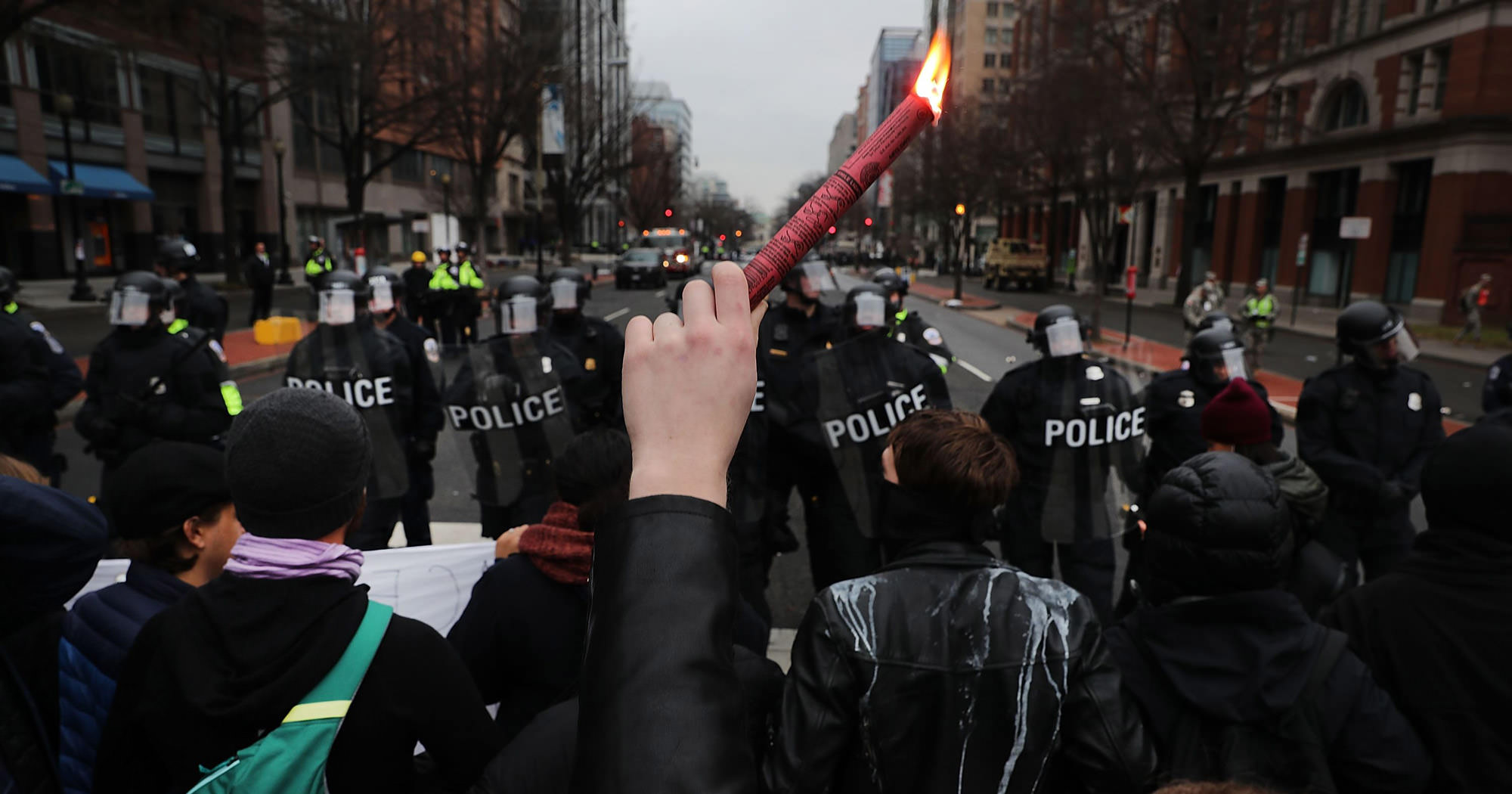 We are calling for a Week of Solidarity with the J20 defendants from July 20 to 27, 2017. July 20 marks six months from the initial actions and arrests during Donald Trump’s inauguration, and on July 27, a motion to dismiss the charges will be argued in court. The case has finally begun to receive the media attention it warrants; with this court date approaching and the cases underway, this is a crucial time for a second Week of Solidarity. Send reportbacks, photographs, and inquiries to J20solidarity@protonmail.com.

On January 20, 2017, thousands of people came to Washington, DC to protest the presidential inauguration of Donald Trump. In the early morning, blockades shut down security checkpoints and discouraged people from attending the inauguration itself, while impromptu marches and direct actions occurred throughout the day. There was a spirit of defiance in the air.

Iconic images circulated almost immediately, from the punching of white supremacist Richard Spencer to pictures of a limousine on fire. These were only the most spectacular images, however, of a day that was characterized by generalized disruption.

Midmorning, an “anticapitalist and antifascist” march of several hundred people made clear its opposition not just to Trump but also the system that made Trump possible. Led by banners reading “MAKE RACISTS AFRAID AGAIN” and “TOTAL LIBERATION FROM DOMINATION,” the disruptive march took the streets of DC to the sound of fireworks and anticapitalist chants. After about half an hour, the march was brutally attacked by police, who used chemical and crowd control weapons along with physical force, then boxed in (“kettled”) and mass-arrested people. Everyone on an entire city block was arrested and given the same charge of felony rioting. Approximately 214 arrestees now face a total of eight felony charges, including conspiracy and destruction of property. All of the J20 defendants are now facing up to 75 years in prison. 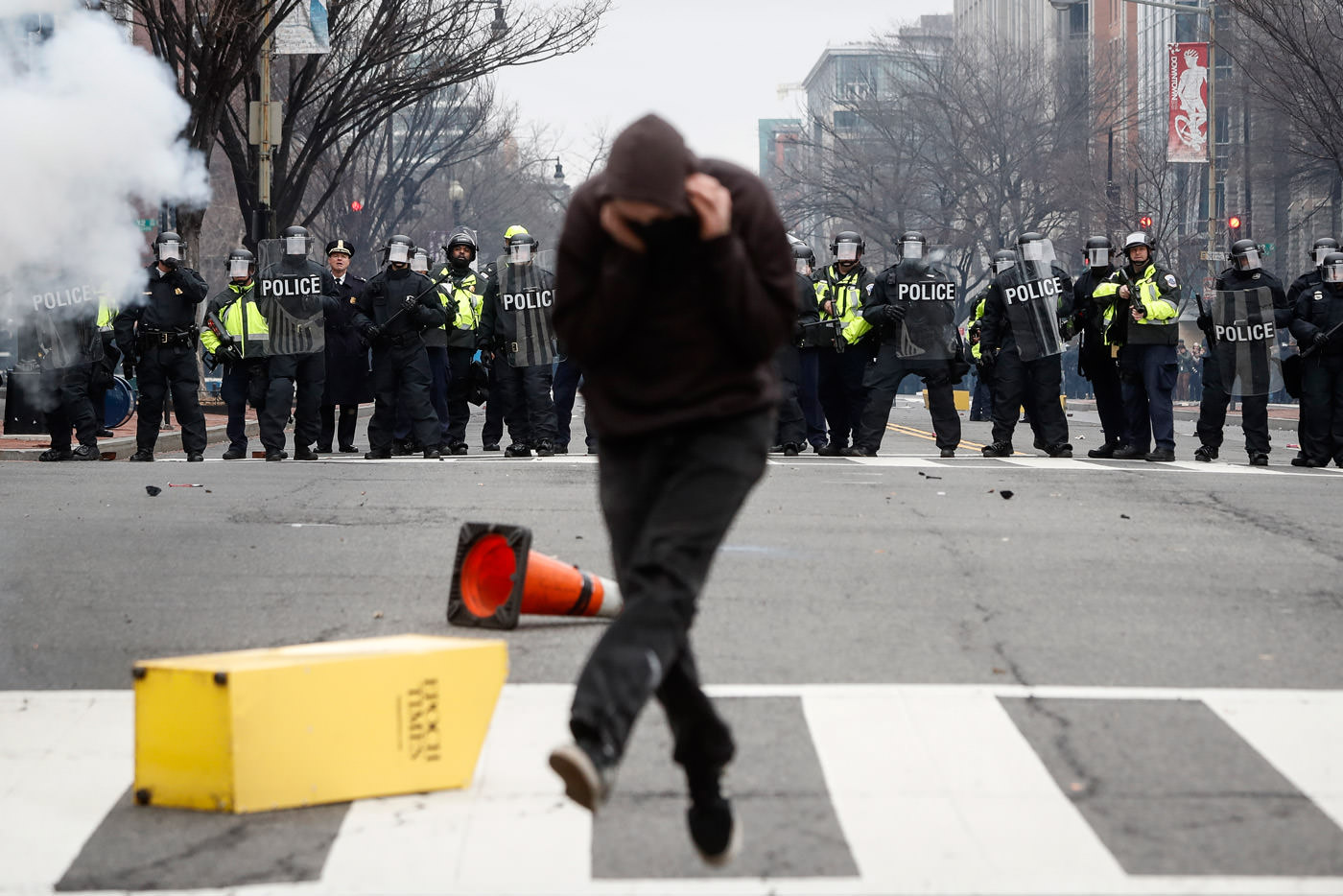 A great deal has happened in the six months since the inauguration. Confrontational protests have taken place across the continent, challenging the political landscape shaped by Trump’s election. Participants have stood up to emboldened white supremacists, disrupted airports in the face of anti-Muslim bans, blockaded proposed pipeline routes, set up sanctuary spaces and rapid response networks against ICE deportations, and much more. In turn, states are passing legislation aimed at further criminalizing protest and limiting resistance.

The J20 case fits into this wave of repression. The police seized and hacked phones in an attempt to strengthen the government’s case, and subpoenaed social media accounts. They raided an organizer’s home in DC. Arrestees had their personal information leaked online. The prosecution filed additional charges, essentially accusing the entire group of breaking the same handful of windows. All this has disrupted the lives of the defendants in the J20 case, who have lost jobs, incurred legal expenses, and been forced to make repeated trips to DC. The majority of cases are now headed to trial, with a handful of trials set for November and December 2017 and the rest scattered throughout 2018. Despite the fact that the state forced a large number of strangers into this situation at random, the majority of defendants are working together, responding to the charges in a collective way.

In order to continue to build our capacity to counter state repression and strengthen our interconnected struggles, we are calling for a Week of Solidarity from July 20 to 27, 2017, to make support for the J20 defendants widely visible. July 20 marks six months since the initial actions and arrests; on July 27, a motion to dismiss the charges will be argued in court.

We call on supporters to organize events and actions in solidarity with the J20 defendants throughout the week. Be creative and strategic! Help cultivate a spirit of resistance and mutual aid! Some ideas and areas to focus on during the week include:

• Fundraising – As with any legal case, fundraising for legal and travel costs continues to be important. You can consult a list of regional fund-raising sites here and make donations to the general DC fund here. One easy fundraiser activity would be to organize a screening of the new subMedia film “No Justice … Just Us: Movement Defense against State Repression”. Other ideas include bake sales, raffles, speakers, or benefit shows. Some folks have also made t-shirts and tote bags.

• Take Political Action – The J20 arrests were so plainly illegal that even the DC city council has funded an investigation into police abuses that day. This could turn up evidence useful to the defendants, but only if it takes place soon! During the Week of Solidarity, flood the DC Office of Police Complaints with demands that the investigation happen NOW. For more details, go here.

• Outreach – One reason these prosecutions are possible in the first place is the lack of visibility around the case. Find ways to spread the word, with an eye toward translating visibility and public awareness into the capacity for material and emotional support. If you are part of an organization or have connections to one, ask it to endorse the “Statement of Solidarity,” or write and release your own statement against the prosecution in solidarity with those arrested on J20. Circulate statements widely among all the networks you have access to.

• Increase Visibility – Design posters and decorate your town with them. Several poster designs are available here, but more designs are always welcome. Consider designing handbills or other agitational materials. Share them in the days before the Week of Solidarity. Drop banners. Paint graffiti. Set up an information table at a public event or space. Spread the word on social media; try to persuade people who are well known to take a public position. Organize public visibility actions to spread the word about the case; international readers could consider taking action at US embassies to demand that the charges be dropped as a means of raising awareness.

• Build Connections – Use the Week of Solidarity as a means of connecting struggles. The J20 defendants aren’t the only ones facing felony charges for their resistance or presence at political events. Organize joint events to benefit other defendants as well. Think of ways to connect across movements, using such events as a stepping-stone toward building robust and combative movements that can withstand repression and take the initiative.

• Build Capacity – It’s also important to remember the many and varied reasons that people took to the streets on January 20. Those are at least as urgent now when so many people are facing charges. It is imperative that people not turn away out of fear of repression or isolate themselves. That is what the state wants. We must meet these charges with defiance and continued resistance. We must respond not just as supporters but also as active comrades in a shared struggle.