TYENDINAGA MOHAWK TERRITORY – The rail blockade at the Wyman crossing in Tyendinaga Mohawk Territory has grown in size and scope since it began Thursday afternoon. A camper trailer, porta-potty and tent have all arrived on site. And the number of people present is growing.

The reason for the blockade is simple, according to Dalton McKay. “I’m here for the support and solidarity of the Wet’suwet’en people to help support them against the destruction of their life and their homes for a pipeline,” he told Real People’s Media.

Over 50 Mohawks and supporters were gathered today where the CN rail line crosses Wyman Rd. just North of Tyendinaga Mohawk Territory. The Mohawk Warrior flag flew high from the crossing signal, and a large plow truck was parked just south of the tracks. 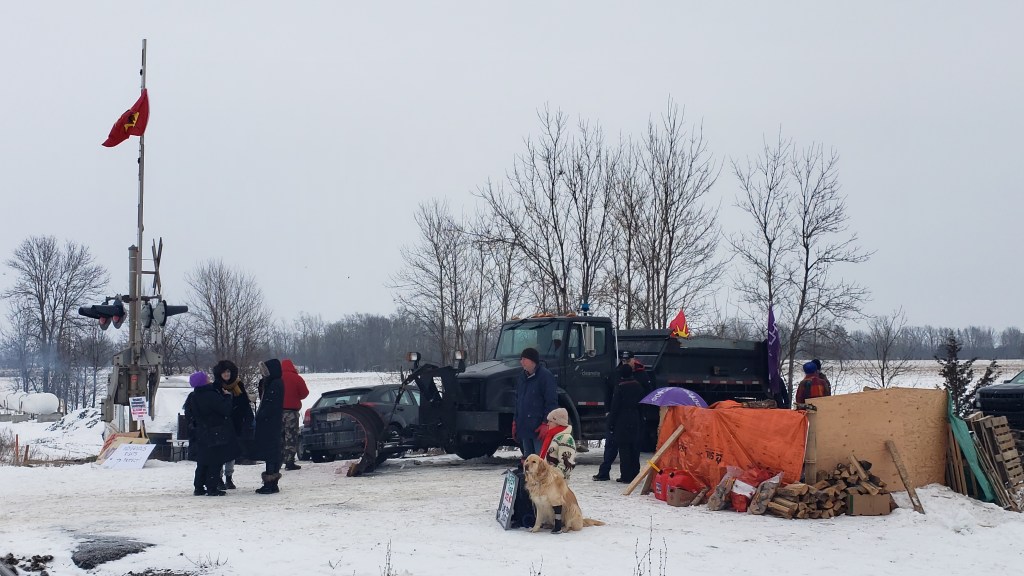 There was much stronger police and media presence at the tracks than there was in previous days. An injunction had been served the day before against “John Doe, Jane Doe and Persons Unknown”.

A statement was circulated on social media in response.

“In regards to the “Injunction” served on the people of Tyendinaga, We the people refuse to have your laws imposed upon us. We have, and have always had our own laws and customs, prior to, during and thereafter your attempts at genocide and assimilation. A paper ordering us to vacate our land, and or allow passage of foreign goods through our territory is meaningless. We will stand our ground, and as stated, not leave until the RCMP pull out of Wet’suwet’en traditional territories.”

The mood at the site was upbeat throughout the day, and a steady stream of supporters continued to arrive with food, wood, and other needed supplies. McKay said “Support from the community has been a huge help, every day we are receiving food, water, blankets… the biggest thing we still need right now is prayers and support and firewood.” When asked about morale at the blockade, on person gestured to the coyotes who had begun howling in the distance.

The youth recognize the importance of this action. As one young Mohawk man explained it: “This is our land, this is our water, we’re just here fighting to get what is ours back and what we need for the Seven Generations to still be able to fight and have a land.”